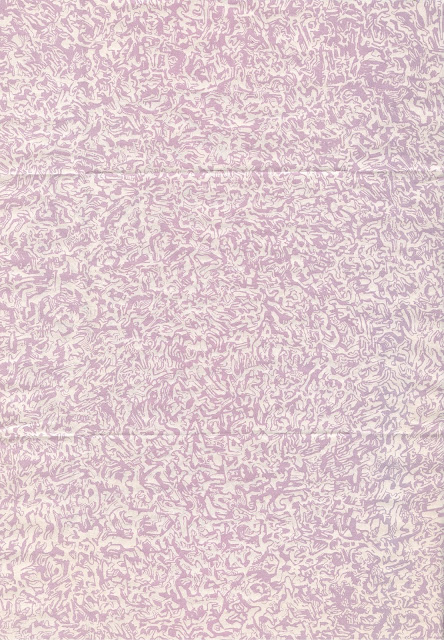 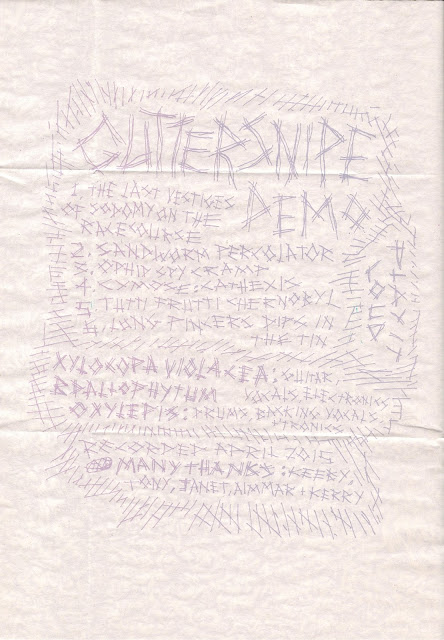 
Like Spike Milligan said ‘If you keep your ear close to the ground you get to listen to lots of dogshit’. And while this job [job?] leads to plenty of good listening I still get my fair share of dogshit. I have so many dog turds now that the review bin overflows with them. I daren’t even go near them for fear they’ll leap out and attack me, their little plastic cases trying to sever my jugular as I frantically flap in any direction screaming for help and mercy and forgiveness all in one panicked blurted out sentence.

But good things do arrive and when they do they’re a pleasant surprise. This Guttersnipe demo was picked up from the merch stall on the Saturday of the Tor Ist Das! fest where Guttersnipe were easily the best thing I saw all day. Not bad for an early evening slot in a church where acoustics don’t normally lend themselves to such howlings. Perhaps it was my stage front slightly to the left pew that did it? Or the good sound as generated by the sound man. I have no idea how these things work. All I know is that that guitar sound was real mean, a deliciously degraded sound akin to a seething wasps nest being stripped to its core with a circular saw set at 10,000 revs. There’s a drummer too, a cross between a daddy long legs and Thurston Moore, all lithe limbs and tousled hair. They’re from Leeds of course, assembled from the wreckage of a short lived group who had a Japanese sounding name who I saw play a few times down the Wharf where their short songs made from scratchy urgent guitar and rapid drumming always went down well with me - even if it wasn’t the kind of thing I’d chuck on the turntable at home.

There’s electronics too which gives their sound a noisier edge but its the way they combine guitar, drums and electronics into songs as a whole that really got my [and most everyone else’s in Todmorden’s that day] attention. Their delivery is all sneer and growl delivered with guts and emotion and genuine feeling. Its not something you come across too often.

The delicately printed fold out sleeve tells me the band consists of Xyloxopa Violaxia Bdallophytum on guitar, vocals and electronics and Oxylepis on drums, backing vocals and ‘troniks. I pass this on as mere information. By far the best of the six tracks and thirty minutes of this demo is the nine minute epic ‘Tutti Frutti Chernobyl’, which begins in Bolt Thrower territory and ends up in in the bottom of a tarry pit from which emerge the gaseous plops of various Japanese noise bands. Xyloxopa sings like a demented siren stuck down a well having diseased rats dropped on her head, a voice thats makes Diamanda Galas sound about as menacing as Mary Poppins. Oxylepis drums like an octopus. ‘The Last Vestiges of Sodomy on the Racecourse’ which gets my vote for the best track title of the year, contains the kind of guitar wringing that makes you want to like guitars all over again. At a time in my life where guitar bands mean less with each passing year I find myself in the unfamiliar position of championing a band with one at its very heart. The Last Vestiges of Sodomy on the Racecourse’ descends into the kind of howling noisestorm as created by many a noise artist but behind it all lies that voice and those rattling drums and a constant barrage of bass note detonations. Exhilarating stuff. Last track ‘Long Pincers Pips In The Tin’ is the shortest at a minute and a half and finds a helium filled cat singing to a background of electronic squiggles. Its all utterly joyful and full of life and proves that Leeds is still capable of producing bands that are at the very edge of whatever the zeitgeist is. Cant wait to see them down the Wharf Chambers, if they sounded good in a church the WC is going to feel like CBGB’s.

Posted by Idwal Fisher at 8:37 pm No comments: Links to this post 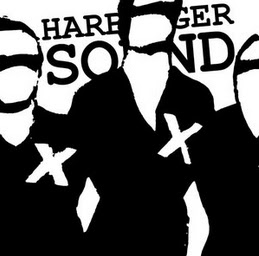 I never really got the collector thing. The usual stamp collection as a kid and then in my teens a rather odd phase, that lasted a couple of years, whereupon I took it upon myself to collect cigarette packets. No, I have no idea why either. One day I chucked them all in the bin and thats been that as far as collecting goes. Even when I got into music I didn’t feel the need to collect everything by an artist I admired or a genre or a label or a certain period of time. I’m more of your gadfly picking up bits here and there before moving on, always in search of something new, being delighted by some unexpected sound or release thats just amazingly dropped through the letterbox thats the best thing I’ve ever heard since the last thing. Even now where I’m lucky enough to be in a position to be able to afford pretty much what I want music wise, I feel no need to own original Pharoah Sanders LP’s or some of his more obscure early singles. If the house were to burn down tomorrow a part of me would probably think someone had done me a favour. But this isn’t everybody of course.

Some people are collectors. There are websites and magazines dedicated to their pursuit, collectors fairs where they get to dig around for bits that have escaped them and meet other collectorists, online forums where the tiniest details can be gone over in even greater detail by even greater collectorists. The Record Collector is one such magazine and I buy the odd copy if something on the cover catches my eye. This months issue features Steve Underwood in their ‘Collector of the Month’ column [or whatever its called]. And Steve, as any fule kno is head cheese at Harbinger Sound, the label thats gone from reissuing Japanese noise cassettes to top ten in the album charts courtesy of Sleaford Mods.

Its no secret that I’ve known Steve for quite some years now and have actually seen, in the flesh, his record collection, or parts of it at leasts since the place he was staying in when I visited wasn’t actually big enough to contain his thousands of singles and LP’s. A few of us spent an evening at his flat playing ‘Have you got?’ and invariably Steve had. An original copy of The New Blockaders first LP was casually tossed across the carpet, singles that people had heard of but never seen were dug out for us to ogle and admire. Jaws were dropped and homage was paid. We are not worthy etc.

I knew Steve liked his noise and his punk and his Bukowski, he used to send me tapes of Urinals singles and Smegma LP’s all of which were gratefully received all of which acted as portals to new worlds but it wasn’t until much later that I discovered that what really made Steve’s pulse race a little faster were singles released between 1978 and 1984.

These were the years when punks DIY ethos ran riot resulting in an explosion of creativity where anything was possible and the only limits of your creativity was the time it took for a needle to get from one edge of a seven inch single to the run off groove. Exciting times that are unlikely ever to be repeated but are remembered fondly by those who were there.

Steve took some of these singles down to Torquay to play on Steve Cammack’s Muhmur Radio Show. Its a three hour show [split into two for ease of access] which I’ve now listened to in its entirety and what its shown me is that there is a reason why people collect things; Steve collects singles from this period because if you want to hear them then you have to buy them in order to do so - they just don’t exist anywhere else, there are no handy double CD comps for you to listen to whilst you do the crossword, there may be the odd music blog with online archives but where’s the fun in that? If you want to listen to what Steve listens to you have to get out of your chair every three minutes and get your wallet thrashed in to the bargain. Its part of what being a record collector is all about.

The list of singles that follows this piece will give you some indication as to where Steve’s tastes lie. These bands were working on the edges of the edges. On labels so obscure that some of their releases have only ever been seen and heard by the very few. We are in deep DIY country, a country populated by those for whom punk was a soon to be forgotten corpse fit for nothing but those hitching a ride to stardom and appearances on Top of the Pops.

I have to admit to being blown away by these three hours. Listened to as a whole they span everything from adolescent prankery to groove damaged loop to damaged DIY punk to pre LAFMS craziness and are in all probability unlike anything you’ve ever heard. Since 1984 at any rate.


Muhmur
Posted by Idwal Fisher at 8:15 pm No comments: Links to this post