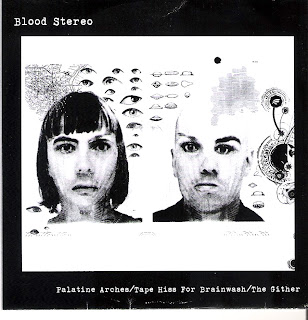 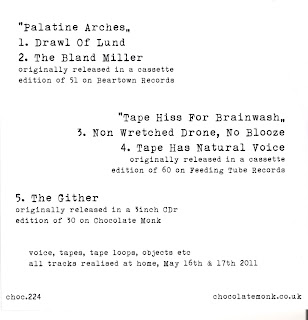 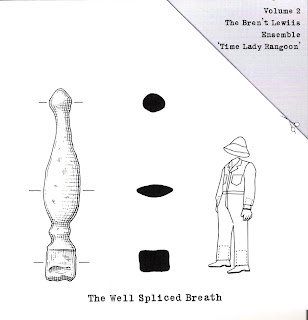 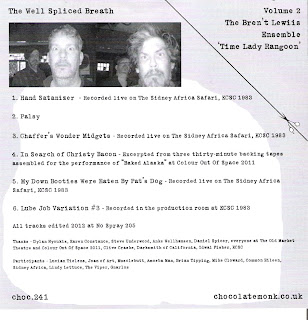 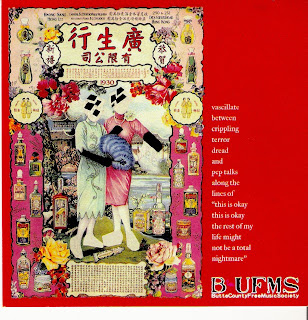 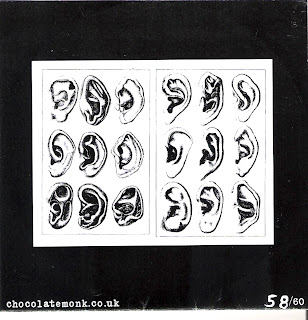 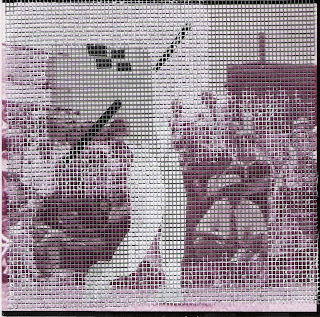 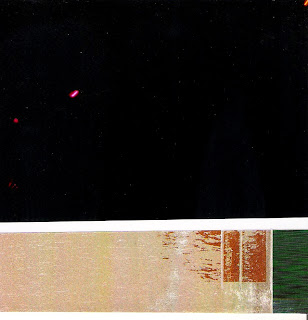 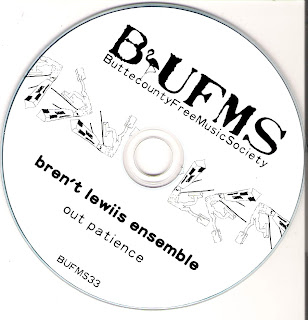 Dylan Nyoukis may have got involved with the Albert Hall and all things John Cage centenary celebrations but I still cant shift this image I have of him singing like a Saturday night drunk at last years Rammel weekender. Someone should have recorded it and stuck it on a Chocolate Monk release. Maybe they already have? The passers by certainly liked it and it would have sat nicely with the first track on this here collection of Blood Stereo rarities; ‘Drawl of Lund’ sounds like it was recorded in the aftermath of the Battle of Flodden where the moans of the dying hung in the damp air. The sight of a drunken Nyoukis stumbling through the mud and the blood singing into a Dictaphone would have been a sight for sore eyes and what if Seymour Glass had been there to join in? Think of the possibilities.

Out Paitence has been kicking around for a while here. It turned up last year with a package that included the memorable and sadly overlooked Glands of External Secretion double album ‘Reverse Atheism’ [and if you haven’t heard that little beauty then you really are denying yourself a major treat].  Recorded at the Bell Memorial Union building California in 1984 it captures the sound of Lucian Tielens, Tim Smyth and someone going by the name of Gnarlos picking up various objects and dropping them to the floor. There's also the sound of them playing a pinball machine, spouting gibberish, plunking toy pianos, smashing pie tins, dropping wrenches, whirling ribbed tubing, wheezing into harmonicas, whistling, chanting, singing and probably about three hundred and two different things besides whilst constantly moving around an echoing huge airy hairy space. Its a sprawling listen of course but not one without merit or significance. Tidbits of this have appeared before but now we have it in all its 47 minutes continuous, ramshackle, chaotic, glory.

Gnarlos and Tielens, [along with several other participants including Lindy Lettuce, Amoeba Man, Common Eileen and Sidney Africa] turn up on ‘Time Lady Rangoon’. This being a collection of early works pulled from a late night 1983 radio show and a backing tape that was used by The Bren’t Lewiis Ensemble during their headlining set at the 2011 Colour Out Of Space fest. Its all madness of course but immense fun with it. On ‘My Down Booties Were Eaten By Pat’s Dog’ someone repeats the title whilst a pianist plays various pieces including the funeral march and the wedding march back to back over the sound of a party in full swing. ‘Hand Satanizer’ is a collection of vocal tics, poetry and random words mixed with TV noise, Herb Albert’s trumpet and a 50’s Rock ‘n’ Roll radio station that keeps losing its signal. Someone recites dialogue in a voice that would lead you to think that there was a definite absence of testicles and then there’s the screams, the political speeches and is that the sound of someone being strangled? ‘Palsy’ [also recorded in 1983] sounds like it was recorded in a lunatic asylum whilst a Hammer Film flickered away to the inmates. Small dogs bark, a baby cries and a female soprano wails away in reverse on a loop. The new stuff remains true to to the old. Almost thirty years may have passed but we’re still in Palsy territory with ‘In Search of Christy Bacon’. You can’t beat a bit of quick editing to quicken the pulses. Think Mixed Band Philanthropist, Broken Penis Orchestra but way more freeform and loose. I dare say the odd beer was consumed.


Blood Stereo meanwhile float in a kind of genre defying sac of amniotic fluid. Here we have electro-acoustic twiddle, fiddle and scrape, mong voiced moanings and heavy breathing as captured during an outre cottaging session in Brighton town center.  On ‘The Bland Miller’ [from Palatine Arches] there’s baby singing, baby gobollalia and an ethereal female voice going ‘whooo whooo’ through the wet trees of a dense Scottish forest while the chickens settle down for the night. Think of Constance channeling Jay Clayton through a haze of wine and fag fumes whilst Nyoukis watches on like a proud Cage-ean father. Its that weird.

‘Non Wretched Drone, No Blooze’ [from ‘Tape Hiss’] loops a church bell ring onto a field recording in which Nyoukis tries to pull a cheap anorak over his head. There could be an army of small people moving bricks about in a pit, there could be a box of pot dogs being loosely carried, it rains, it fizzes but only ever so quietly, it definitely drones and there’s Dylan dragging a gammy leg through the damp leaf mulch. When the violin scrape comes in at the halfway mark my eyes rolled into the back of my head and I found myself uttering invocations to the drone gods, ‘Please let this continue a while longer’. When it suddenly cuts and stops I felt as if I’d been robbed. ‘The Tape Has Natural Voice’ is all snore edits, guttural gurgles, deep sea diver breaths, amphibian croak. ‘The Gither’ writhes about in an analogue bath of Kagel like making, all bubbles, burbles and babies, tape gone mad, tape out of control, tape wound round Brighton sea front balustrades blowing in the salty breeze.

Nyoukis, Constance, Glass, The Butte County Free Music Society, The External Glands of Secretion and the Common Eileen’s of this world make our lives richer with these releases. That these have been pulled from obscurity is a blessing. That they will be reach a wider audience remains to be seen but these are gems that need polishing, nuggets that need discovering, drinks that need imbibing. A fine way to start the new year.

Two last thing; I’m still no wiser as to why The Bren’t Lewiis Ensemble releases have those four black squares on them and where’s Dylan’s beard gone? I still miss it.