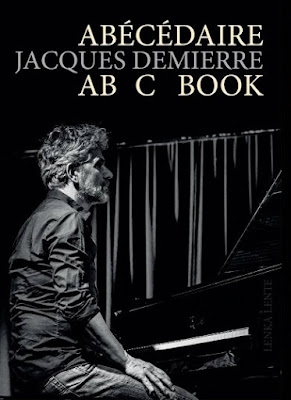 Jacques Demierre describes himself as an improvisor and a composer, a person interested in the relationship between language and music. Swiss born and judging by the long list of releases, installations and publications to his name a busy man. One of life's constant workers, always touring, always recording, writing, making noises and notes.


The cover shows Demierre sat at a piano, eyes front, palms on top of thighs, a picture of perfect contemplation. Which is something he does do a lot of. This book could have been titled ‘Demierre’s Philosophy on Improvisation, Methodology and lots of other things In-Between’. His philosophy on philosophy. Roland Barthes, Zhaung ZI, Derrida are all mentioned as is the Swiss born Sinologist Jean François Billeter. Demierre obviously does a lot of thinking and contemplation. A lot of deep thinking and a lot of deep listening.

Each letter of the alphabet gives Demierre the opportunity to pass thought on things that matter to him most so ‘A’ gives us ‘A Piano Tuner’, ‘Amorous’, ‘Amity’ each piece a page or so of musings and philosophising, on everything from linguistics to Luciano Berio cooking pasta [Pasta] to his work with the LDP Trio and the DDK Trio to his method of working to his thoughts on listening;

‘The ultimate state of listening, if it exists at all, is in no doubt void of emotion, or rather it entails neither the presence nor the absence of emotion. It is a kind of evenness of mood that refers us back to ourselves immersed fully in the experience’.

Demierre also give us his views on Capitalism [this after seeing someone begging outside an Armani store], his feelings of being denied access to a concert hall’s Steinway at a prestigious event [and being told that such a grand instrument would be unsuitable for such avant garde machinations] what its like to play improv under time constrictions [it takes away the need for an ending] and so forth. Its all very readable [and dual language, the first half of the book is in French] and gave me a better understanding of Demierre who becomes yet another improviser/artists/composer that was unknown to me before Lenka Lente's introduction.

The CD contains a thirty minute vocal work called ‘Ritournelle’ a work that Demierre expands upon under ‘Y’ and ‘You’ [You, yeux, eye, I. Geddit?] and within which he attempts to capture the cyclical nature of Franz Schubert’s ‘Winter Journey’ and the last ‘lied’ of that cycle ‘The Hurdy Gurdy Man’. Winter Journey being Schubert’s take on Wilhelm Müller’s poem cycle comprising of twenty four vocal/piano compositions.

After having listened to Schubert’s ‘The Hurdy Gurdy Man’ and then to Demierre’s version I wondered how Demierre could take such a minimalist, bleak, austere and haunting composition and transform it into something totally unrecognisable. Its an exhausting listen, as exhausting as it must have been to record it with each series of words emerging staccato like in a constant morphing stream, Demierre trying to gulp down air as each word transforms form one to the other before being replaced by yet another. Exhausting yes, but exhilarating with it.