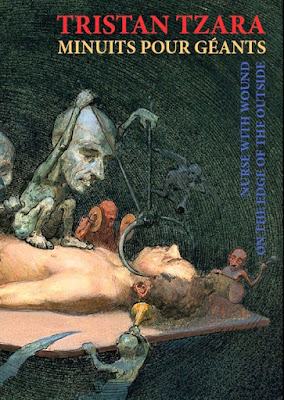 Nurse With Wound - On The Edge Of Outside

One benefit of being in an ongoing on-off Kirklees lock down loop of sorts, is that I've been doing a lot more reading than usual. The benefits of sitting quietly with a book are much ignored and while some people go batshit stir crazy after two hours of being indoors and start redecorating their houses or subscribing to all sorts of shit to watch on the telly I find the quiet and solitude that a book brings to be as good for my mental health as any amount of therapy. Not that its that quiet around here anymore but you get my drift. In some respects it's a little like being in a holiday cottage on the Northumbrian coast only with more police sirens, barking dogs, kids playing tuneless recorders and the rumble of the M62.

Mrs Fisher is the more voracious reader of the two of us and when not writing herself is capable of chewing up novels in a day, while I like to take a more casual approach, dipping in and out of books of various genres with a nonchalance that some people might find whimsical or dilettantish. I skip from newspapers articles to short stories, to rereading bits of favourite books, occasionally I'll get my teeth into a really good novel and will tear through the pages with a manic zeal wondering why I don’t read more novels only to be distracted once more by that book on Kraftwerk or the forthcoming Kelman.

Last week I swung from reacquainting myself with The Importance of Being Earnest to the second installment of Francis Stonor Saunders fascinating account of her families escape from Romania during the Second World War to Kafka's Metamorphosis to Private Eye [the latter I now realise being far too cynical and wearisome for pandemic reading]. After flicking through a Dora Kinsley book on the lives of famous authors I decided that the three novels of Cormac Mcarthy's I'd read were nowhere near enough and that I should get hold of some of his others, perhaps with an eye to taking them on holiday next week [yes, an actual holiday] but then what about the 'to read' pile? That ever present jumbled tower of books that is forever a reminder of money spent but not benefited from. Its certainly shrunk during lock down but it still lives in double digit territory; The Complete Sherlock Holmes, The Complete Edgar Allen Poe, all those Pushkin Press Japanese short story collections, Celine's Death on the Installment Plan, Martin Amis ….

I'd like to read the words of Tristan Tzara which Lenka Lente have put in to a book along with a well paired Nurse With Wound CD but as is sometimes the case, the words come in French. I have no problem with this. Lenka Lente are a French publisher and I don't expect them to pander to my lack of bilingualism. With previous Lenka Lente publications of a similar nature, I have at times been able to circumnavigate this problem by casting around for an online translation, but not this time. I have at times in the past scanned pages and translated the resulting images using online software but time isn't on my side here and to translate ‘Minuits Pour Géants’ would deprive me of my precious dilettante-ish reading time. Instead I do some Tzara research because I now realise that I know little about him other than he was one of the co-founders of Dada. I now know a little more; painter, avant-garde poet, performance artist, director, composer, critic, essayist and an eventual mover towards Surrealism. Born plain old Samy Rosenstock he changed his name to one that is said to be a Romanian pun on ‘sad in the country’, or ‘sad donkey Tzara’ in French, though this seems subjective. English translation of Tzara’s work appear to run to his poems and Dada manifesto’s leaving me Tzara-less as far this goes. Ah well.

Ten minutes of new Nurse With Wound sort of makes up for this but it didn’t satisfy my craving enough, so I played A Sucked Orange as I dug around for the Nurse With Wound/Hafler Trio split cassette from 1987, a release that still fries my mind to this day. I didn’t find it so I played On The Edge Of Outside on repeat for a bit. Expect heavy, portentous guitar, hammered piano and a soundtrack to something scary, preferably by Peter Strickland. Nurse With Wound here as a quartet and that heavy guitar courtesy of Andrew Lille who seems to revel in such things, cascading sheets of echoing guitar, scraped strings and wild tumult beneath which eventually appears the sounds of a gutted upright piano as played by the survivor of an industrial press accident.