Octave Mirbeau and Nurse With Wound. The Last Post. 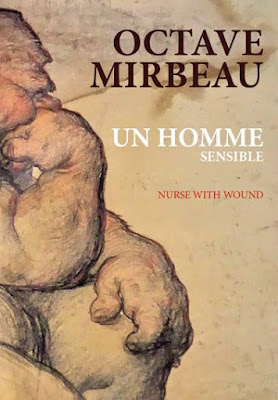 Let me finish where it all started. With Nurse With Wound whose music I have been listening to for the last ooooh thirty five years or so. Late eighties maybe? Mid eighties? Memories lost in the fog of time. You listen to so much you lose track. What was my first Nurse With Wound album? Probably ‘A Sucked Orange’, maybe that collaboration with Hafler Trio that came out on Staaltape. ‘A Sucked Orange’ I found hilarious; I’m A Frayed Knot, Pleasant Banjo Intro With Irritating Squeak, Scrambled Egg Rebellion In The Smegma Department. I listened and thought to myself but aren’t Nurse With Wound supposed to be dark and scary? Somewhere lodged in the back of my brain was the cover art for ‘Chance Meeting ...’ and that leather clad dominatrix and the thought that only weirdos listened to Nurse With Wound and here was ‘Raymonde Fluffs It’ in which Raymonde fluffs his opening lines. Laugh? I nearly bought myself one. The split with Hafler Trio meanwhile, that truly fried my brain. I had no idea what was going on but I knew that I liked it.

Shortly afterwards I availed myself of twenty nine United Dairies cassettes via Ron Lessard and have proudly walked stride by stride with Nurse With Wound ever since, diving in to the back catalogue and buying new stuff when the chance arose. Until recently when the thought struck me that barring what Lenka Lente have released I haven’t listened to a new Nurse With Wound release for what must be over ten years. How did that happen? How did I manage to overlook what one of my favourite bands have been doing for the last ten years?

I decided to make up for lost time by drawing up a list of every Nurse With Wound release catalogued on Discogs and ticked off all those that I had physical copies of. I discounted the two Nurse With Wound MP3 discs I bought in St Petersburg in 2003 because a] I dislike the Russian and Chinese attitude towards copyright and b] MP3’s are a bit shit. I now realise that far from having everything Nurse With Wound had recorded from inception to the year 2000 and bits beyond I was the proud owner of quite a bit of it with several gaps that needed filling. To fill these gaps I need time and money so for the foreseeable the blog is being put to bed as I venture forth on the good ship Nurse With Wound proudly captained by Steve Stapleton and his crew. Whether I shall ever rouse it from its slumbers we shall have to wait and see.

In the meantime I’m going to find out what Nurse With Wound have been up to these last ten years. I need to hear what awaits me within that decade and the gaps that lie beyond. I shall also paint and draw, read, listen to the radio, go for walks around Scholes, see out this sodding lockdown, survive the virus and hopefully emerge like a vaccinated butterfly sometime during the spring months. By then I will have listened to lots of Nurse With Wound. Lots. Masses. Hopefully I’ll have bought quite a bit too. Maybe I’ll sell off some stuff to make room for it. My very own dedicated Nurse With Wound shelf with a vinyl copy of ‘A Sucked Orange’ forever proudly on display.

My Lenka Lente/Nurse With Wound CD’s will also go there though the shelf will have to be a tad smaller to accommodate them. These three inch/five centimeter discs have been virtually my only portal to what Nurse With Wound have been up to recently. The last one that came through the door piquing my interest enough to having me seek out their Tusk set from 2017, which by the way in case you are interested and why shouldn’t you be is quite stunning and well worth your time. If only I was there. Woe is me etc.

‘Alienations [The Devil’s Interval]’ is a fifteen minute slice of a ‘sleep concert’ Nurse With Wound gave in Ireland also during 2017. Sleep concerts being eight hour long overnight shows where Stapleton DJ’s his back catalogue while mixing in live sounds [I’m guessing] as the audience chills out for the night on airbeds and sleeping bags. Somnolence and hypnogogia being the perfect state of mind in which to receive the slowly moving drones of say Soliloquy For Lilith. Whether Stapleton played ‘Chance Meeting …’ in its entirety at four a.m. isn’t recorded. You can achieve the same state of mind at home by smoking a big bifter and playing Soliloquy For Lilith on repeat while rubbing the rim of a glass bowl with a wet finger. Just don’t try it with ‘A Sucked Orange’ ... unless you’re an insomniac. The results will be very different. Fifteen minutes culled from eight hours of DJ’ing will have to suffice for now then and beautiful it is too with the merest hint of Aurelie Lierman’s vocals helping to lull you safely in to the droning arms of morpheus.

As for Octave Mirbeau, I vaguely remember buying a copy of his ‘The Torture Garden’ when I was going through a very expensive and steep transgressive reading curve. If I had all the money returned to me that I spent on books of a transgressive nature I’d have enough to buy a good chunk of the Nurse With Wound back catalogue on original vinyl, in mint condition. Needless to say I was wholly unprepared and underwhelmed by Mirbeau’s satire on the brutality of humankind wanting and expecting something of a far more base nature for my money. I left Mirbeau and much of transgressive literature behind around the same time. Maybe I should go back now that I am older and wiser? Now that I have more time on my hands. Now that I’m reacquainting myself with Nurse With Wound. The perfect partners perhaps? I could translate all of ‘Un Homme Sensible’ while listening to ‘Automating Volume Three’. I’m sure that it would be time well spent.

Farewell young Idwal, it has been a joy and a pleasure reading you on paper and on screen for the past ???? years ... and to think you were just glittering. X

Thanks for all your words, thoughts & many useful recommendations!