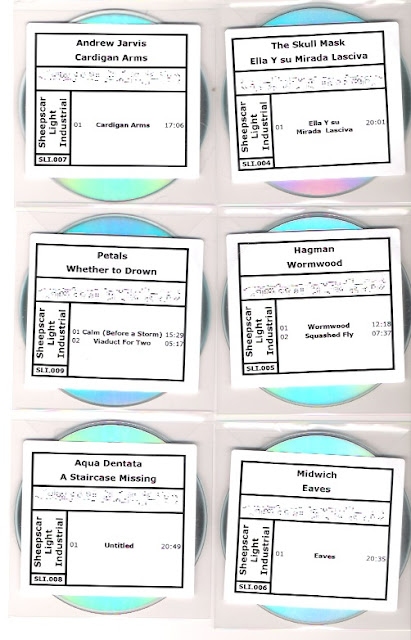 I was talking to the Cammster on the blower the other night when the name Sheepscar Light Industrial came up. The Cammster, like me, was very much enamored with the first few SLI releases but after seeing a further six come to light in such quick succession was worried that SLI cheese Daniel Thomas was trying to talk before he could grunt. Too many releases all at once old chap, the worry of enthusiasm blinding the quality control sensors and they’re so cheap [£1.50], surely this is the way to the workhouse and ruin? Too fast too soon, can’t keep up this work rate, quality will suffer, all said in a slightly ‘we know what we’re talking about’ voice, arms folded across chest, head nodding in a condescending fashion.

Which is all bollocks of course.

Well, theres going to be some lows in and amongst the highs but the lows are hardly worth mentioning whilst the highs are high things of such high-ness that I’m going to have to be careful not to crash the gushometer.

But gush I will over Midwich and the 20 minutes worth of a simple looped, slightly phased bell-like ringing melody that begins life with a digital recorder stuck in the Midwich eaves capturing the comings and goings of neighbour's children and some hive building bees. Like all good Midwich work its simplicity is its greatest strength. The Bearded Wonder played us all a version of this work at a recent Wharf Chambers gig and it carried us all off beautifully. A serious contender for the head bobber of the year award.

All of these releases have drone at their heart except for The Skull Mask. The twanging Mexican who has found comrades in Leeds seems to be able to play two guitar at once. Except its not that of course. Two slightly phased guitars playing an attack of strings with the usual Derek Bailey fingers stuck in soundhole panache. Its all fine and dandy but if only Miguel would calm down a bit. This is work that would benefit from a lull in proceedings now and again. I’ve nothing against a bit of frenetic guitar improv and it all sounds crystal clear and impressive but I yearn for space and the opportunity to hear a string ring out on its own once in a while.

Andrew Jarvis [best Sunday name] heads to Leeds and the Cardy Arms for a bit of guitar thrape as attached to a table top covered in various gubbins that emit various throbbing pulses. The thraped guitar couple to gadgets drone is one that works for me, a thraped guitar on its own can empty a room quicker than a deadly fart but stick some electronics all over it and I’ll stay there all day. Mr, Jarvis has many strings to his bow and this is evidence of another to add to his collection. I just wish I’d have been there to witness it.

Eddie Nutall’s project Aqua Dentata is another name that had me and the Cammster cooing in delight. The Cammster shared a stage with him in Stoke Newington earlier this year, went to see him him play in Bristol, bought his merch and became a fan. AD’s approach is a simple one that pays dividends, a processed rung bowl that takes in various electronica producing wonderfully flowing organic drones that become all encompassing and enveloping.

Petals recent performance at Dwarf Chamber had me teetering on the edge of indifference courtesy of too many massed choirs and heavy keyboard riffs, a bit like John Lord meets Arvo Pärt - not such a bad idea on paper now that I read it but on the night a bit too magnanimous and bloated for my liking. This is much better, a dirty raucous roar that disappears into a blizzard of radio white noise whilst the second shorter track has an almost industrial ambience to it.

Which leaves Hagman, the work of Daniel Thomas who judging from these two tracks is a droning industrialists delight. Wormwood and Squashed Fly flutter and crawl with drones pulled from the soundboard of 23rd century cargo ship. Muted warning alarms that oscillate and throb and churn, a bleak soundtrack to a dead and dusty planet.


Six releases all at once and no harm done.

that was PETRELS on the synthbombast at dwarf chambs, not PETALS, ya big goon ... oh, it's so confusing, this name thing

And I was sober at that gig ... Petals, Petrels, Steps, Staple Singers ... its no wonder I get mixed up.

Cheers for the kind words about 'eaves' Mark - much appreciated, as ever. Love, Rob H