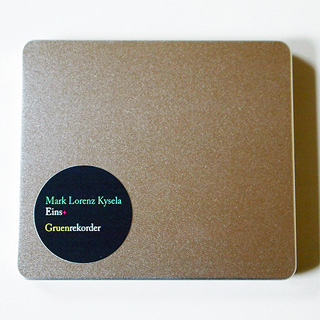 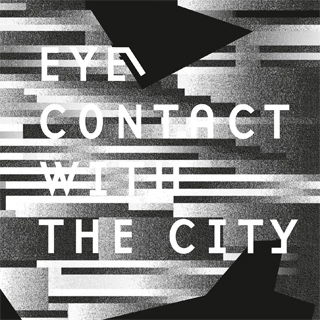 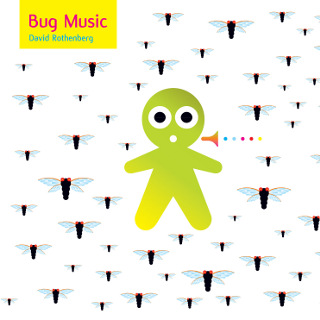 
I’ve been looking at Dave Foster Wallace’s book Infinite Jest for some years now. Since it was published in 1996 in fact. I used to pick it up in the Bradford branch of Waterstones  and marvel at its sheer size [all 1,067 pages of it] and wonder if one day I’d find the time, or the courage, to read it. Seeing as how I’ve now managed to club Pynchon into a corner with a knotty stick I decided the time was right and finally bought a copy.

Imagine my surprise then, dear reader, to find Wallace’s voice on the Mark Lorenz Kysela’s release ‘Eins+’. There he is on Martin Shüttlers composition ‘Schöner Leben 7’ in what I assume is one of his readings along with samples of people practicing their sax solos as culled from Youtube. Its almost like he’s begging me to read the damned thing.

A casual read of the enclosed booklet leaves you in no doubt as to what kind of territory we’re entering here ‘...the autonomy of the aesthetic process is subordinated to dispositions that regulate it externally’. Erm yeah. As ever its whats coming out of the speakers that count and what does emerge is truly captivating. On Michael Maierhof’s  ‘Splitting 13’ a plastic cup filled with marbles is inserted into the mouth of an Altosax the result being a series of shrill and dissonant vibrations capable of shattering anything brittle. Tremendously painful and piercing rattles that are followed by silences and low undertones that are the sort of hums you get from digeridoos. A bit like being given electric shocks and then a nice cup of tea in rotation. The entire 70 minute trip begins with a walk to the performing area and a Sax so closely miked as to be able to pick up everything from breaths, tone holes being covered and uncovered and a series of dissonant scrapes that screech like a length of suspension bridge cable being abused with a tenon saw. Electronic elements are introduced, most prominently on Shüttler’s piece where we begin with a gentle flickering of glitches, fried connections and disconnected telephone lines but perhaps most notably on Alvin Lucier’s ‘In Memorium John Higgins’ where ‘the vibrations of a stable clarinet tone and the vibrations of of a slowly rising and barely audible sinus tone meet’. This being Kyslea’s interpretation of Lucier’s discovery that amplified brain waves could be converted into audible frequencies.

We end with a a short but delightful composition from Uwe Rasch called ‘For Sopranosaxophone and Volleyball’. I’ll assume you can work that one out for yourselves. The piece ends with the crashing of a piano lid. A fitting finale.

Kyslea’s task couldn’t have been an easy one but he tackles these difficult pieces with a professional hand. A delightful if at times difficult listen and one that I feel I’d be more comfortable with listening at home than in the live situation. Having seen plastic cups filled with water scraped in the name of contemporary composition I feel I have a platform to speak from.

David Rothenburg likes to blow his Sax too. And his bass clarinet and a Norwegian flute that has no holes. He likes to play along to insects sounds as captured on several tracks here. Rothenburg wanders into the great outdoors to blow improv and play along with the Katydids. The idea being that the insects provide a natural rhythm to Rothenburg’s improvisations. On a number of tracks he’s helped out by friends, most effectively on ‘Glynwood Nights’ where the overtone singing of Timothy Hill compliments the found sounds of nocturnal insects. A live track as recorded in Estonia [‘in which only 50 people were allowed to attend’ it sez here] is perhaps my pick of the bunch, mainly due to it not having much of Rothenburg but lots of a guitarist called Robert Jürjendal whose Hillage like noodlings are the perfect compliment to the nighttime sounds of the Borneo rainforest.

I can’t help thinking that I could listen to Rothenburg without the insects and the insects without Rothenburg but I’m stuck with them both. If I was a fan of bad puns I’d say it bugs me but I’m not. The guy obviously loves what he does and has a quirky sense of humour [track 7; Phaaaroah! Surely he’s a Pharoah Sanders fan? And track 9 ‘The Water Boatman’s Loudest Penis’ - ‘do not try this at home’] But for the most part I find these pieces jarring.

Budhaditya Chattopadhyay’s ‘elegy to Bangalore’ is a single 55 minute composition thats a
monotonous ride mixing the dull roar of building work, city traffic, pneumatic drills [them again] the agitated chatter of site foremen, grinders at work, traditional Indian classical music, [that’ll be the sounds culled from reel-to-reel tapes found in the city’s flea market]  … you get the idea … in an attempt to convey the rapid urban growth of Bangalore. In one huge solid lump that I found difficult to digest.

The entire composition appears as if through a cotton wool filter, car horns appear out of audible fog like dying sea mammals stranded on the Arabian seashore, scaffolding clangs to ground in a muffled thud, clarity there is none. Things finally get interesting around the 40 minute mark when pneumatic drills [them again] get phased through some kind of filter making for a slightly woozy I’ve-had-five-pints-too-many feel. An unintentional drug type trip maybe but I’m glad it was there all the same.

Maybe my listening facilities are out of whack here. Maybe I’ve been listening to to many pneumatic drills of late? Eye Contact With The City was the recipient of an honorable mention at the 2011 PRIX  Ars Electronica fest so what the fuck do I know?