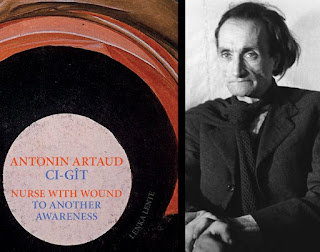 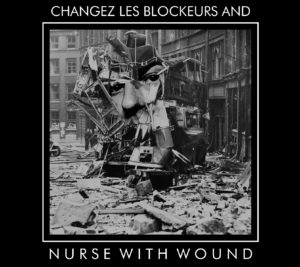 Antonin Artaud is best remembered as the man who created the Theater of Cruelty. Having decided that what the world of theatre really needed was a good shake up he wrote a play called Les Cenci in which a man rapes his daughter who then subsequently hires a hit squad to track him down and kill him [this play was also the first to employ electronic instrumentation in the score with the use of the Ondes Martenot], it ran for seventeen nights and then closed. As a commercial venture it was an abject failure but it made his name. After that he went to Mexico to try his hand at peyote. He wrote essays and poetry, acted and with Germaine Dulac made the first recognised surrealist film ‘The Seashell and The Clergyman’, a film which inspired Buñuel and Dalí to make ‘Un Chien Andalou’. There’s an excellent restored version of ‘Seashell …’ on Youtube should you wish to familiarise yourself with it - I did and its marvelous. He died in 1948 aged 51 having spent much of his life a heroin addict and an inmate of various asylums.

In 1937 he took it upon himself to return to Ireland a knotty walking stick he believed had been owned by St. Patrick, Lucifer and Jesus Christ. He tipped up in Galway which is [as far as I’m aware] the still current residence of Steve Stapleton which makes the togetherness of these two in this book all the more apposite. Having spent several days and nights not making himself understood and generally being a bit of a pain in the arse, the Irish authorities eventually lost patience with him and put him on a boat to France. Minus his knotty walking stick which he lost in Dublin.

‘Ci-Gît précédé de La Culture Indienne’  is all in French of course and may be a reprint of a slim volume that first saw the light of day in 1947. ‘La Culture Indienne’ contains some intriguing lines, a poem he no doubt wrote in Mexico while and under the influence;

Its first line is;

Which leads me to believe its autobiographical but then I’m no expert.

Nurse With Wound’s contribution to the proceedings, ‘To Another Awareness’ is one of those incredible 15 minute soundscapes that Steve Stapleton seems to knock out with nonchalant ease; the slow swell of an increasing in volume, increasing in tension cyclical drone that is aided and abetted by mouth sucking sounds and the passing flutter of night insects. I think I’m right in saying that its unavailable elsewhere either.

NWW Play Changez Les Blockeurs has been reviewed in LP format before but here comes the CD version and with it a track simply called ‘AND’ which swims in the same waters as ‘To Another Awareness’ but if anything ratchets up the tension and mesmeric capabilities another notch. I sat and listened to it while alone in the house, the volume at a sociable level designed to give me aural pleasure without annoying the neighbours. Such is the tracks barely audible level at start up I turned up the volume which was fine for ten minutes until I realised it was beginning to get quite loud. What had begun as a panning left to right cymbal ring sample was now a quite strident panning left to right cymbal ring sample with lots of depth. Then I realised that I didn’t know the running length of the track and worked out that I could be sat here for the next 40 minutes which if the track did run for such a time meant that playing volume would be audible over the jukebox in the pub at the bottom of the road. Then I decided that in an act of self flagellation cum experimentation I would ride the track out without turning down the volume just to see what happened. After another ten minutes or so [its hard to judge the passing of time when in the grip of such a journey] I felt like Pete Murphy in that old Maxell tape advert and was anxiously looking out of the window and checking my phone to see if I’d aroused any unwanted attention. By now ‘AND’ was the Nurse With Wound equivalent of an out of control sixteen wheeler with a bouncing payload of Paiste cymbals. Then something remarkable happened, ‘AND’ came to a stop and at the exact second it did Mrs. Fisher came through the door. The shock of which caused my heart to skip a beat. No really. It jumped and so did I. The silence at AND’s end coupled with the opening of the door giving me one of the biggest frights of my life. Artaud would have loved it.


Pete Murphy in the Maxell advert

The Seashell and the Clergyman