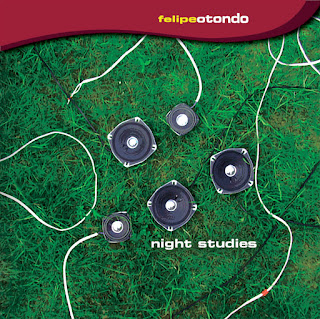 
I’m absolutely certain that I sent the very nice man at the Sargasso label a very polite email explaining how I’d be much happier thank you very much if you didn’t send me any more of your CD’s for review as I’m very busy between now and 2030 which is when I’m hoping to retire. Then another CD turns up which I dutifully listen to and oh this one’s by Felipe Otondo who does things with gamelan structures and is Senior Lecturer at the Institute of Acoustics at Universidad Austral in Chile [I think he was in Lancaster once upon a time] and has won numerous awards from impressive sounding bodies the world over. He’s very good don’t you know. He likes sound. Who doesn’t like sound? Or sounds. I reviewed his last release for Sargasso and that was very good. Looking back at my words [something I’d rather not do and something I take no pleasure in] I found myself gushing all over it and having to mop up my dribbled on Sargasso CD with a freshly laundered Paul Smith hankie that has a picture of a monkey on it and which I keep at my side for such events.

Night Studies is called Night Studies because Otondo must have recorded them at night because he was very busy being Senior Lecturer at the Institute of Acoustics at Universidad Austral Chile during the day, which as you can imagine, must be a very taxing but rewarding position. The press release compares this work to that of Jon Hassell and the collaborations of Holger Czukay and David Sylvian. It’s also described as ‘a very personal and unified collection of shifting, cinematic sonic night-cruises’ which is press release-ese for ‘very relaxing’. Which it is but not as relaxing as Flux & Mutability by Czukay and Sylvian which has been my go to ‘nod off’ album for many years now.

I should stop being glib at this point and tell you that Night Studies comprises of three parts that run to about thirty minutes playing time and are equal parts ambience and equal parts treated gamelan, the ambient parts being er ...  ambient-y and the gamelan parts being of the kind that you recognise as being gamelan after having certain electronic treatments fired at them. Its hard to describe what actually is going on which is why I’m being so glib. Its a nice release which isn’t a nice thing to say, ‘nice’ being a word used to describe something you like but don’t like that much or struggle to generate too much enthusiasm for. Still, at least I reviewed it.

Thanks for you review of our latest release. I'm sorry that we did not receive your request to cease receciving our CDs, but will now add you to our, unfortunately ever growing, list of people that no longer wish to review our CDs. As many now refuse to review any release without financial reward, we are obviously disappointed in your decision. It removes one of the few, honest and knowledgeable outlets for our niche products and as they are very rare indeed these days. Good luck with your imminent retirement!