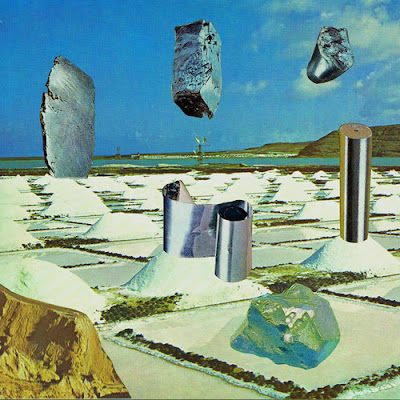 Soundcloud has its uses but the comments people leave during certain points of track playback make me think that its users have vocabularies that aren’t shall we say, overdeveloped. ‘Nice’ and ‘#poetry’ are two that pop up during Grumbling Furs collaboration with Charlemagne Palestine. An album with a ridiculous title that I shan’t reproduce here and could only have been created by someone sitting on a keyboard. And by that I don’t mean one you’d find on a Bosendorfer.

I don’t do much Soundclouding what with Bandcamp stomping over everything Godzilla like but Campbell’s been raving about Grumbling Fur for years now and to be honest the name put me off, a bit jokey, a bit proggy, a bit Blodwyn Piggy. I’m sure that the duo who make up Grumbling Fur; Alexander Tucker and Daniel O’Sullivan are the loveliest of people alive and help old ladies across the road whenever the opportunity arises but I’d never heard a single second of what they’ve ever done because I’d been put off by the name. My bad as the kids say. And seeing as I’m as familiar with what Campbell does as the pot holes in the roads around here it would be unfair to delve in to this collaboration without first hearing what it is exactly that Grumbling Fur sound like.

So I went to their Bandcamp page because that's where Godzilla goes. This is where they’re flogging/promoting their latest album Furfour. You can leave comments here too but instead of Bay City Roller fan vocabulary you get more considered opinions, maybe from Wire readers. Those opinions having Grumbling Fur in the Brian Eno vocal compositions camp which after a few tracks of Furfour I totally get; twin vocal harmony pop for grown ups with lots going on in the background showcasing the duos talent for mixing and overdubbing. I like Brian Eno, I like Brian Eno’s singing, I like Grumbling Fur and Furfour. Forget Blodwyn Pig.

Plasma Splice Trifle has harmonies and vocals and spoken word and when they appear its like a dreamy Dream Machine with pretty pictures flickering against your shut eyelids. Patient reader I was transported. The four tracks as a whole flow seamlessly. I was at one with the bob. I was grooving with the VHF crew. I imagine the VHF crew rolling a fat one [on the already printed LP sleeve of course] and DM-ing all those involved immediately upon hearing the results of their labour with a series of cap locked YESSES. I’d have done the same.

Grumbling Fur and Astral Social Club are a match made in, not heaven exactly that would be too corny but maybe somewhere in the Eno-sphere. Campbell’s sawing violin is there as is the electronic staccato shudder and the pumping beats. The sawing violin is no wild, folksy, moth eaten jumper, cider reeking mad jig either, its a beautiful soaring thing that lifts you cloud-ward, all this as on second track ‘Three Years Apart’ but first we have Campbell reciting from what we have to assume is a book or a poem, something about sperm and going back to the egg, all this over a muezzin call, a small child calling and shortwave static. As an entry to the album it draws you in and is soon followed by trademark ASC head bob beats and further multi tracked Fur/ASC jaw jabber thats buried deep, deep, deep within the mix.

The cherry on the cake is ‘Ozone Antifreeze Intelligence’ and a beatific, melodic piano riff thats the floaty ying to the vocals of the three of them’s yang. Grumbling Fur vocals drift in and  out and under as Campbell speaks, electric guitars hold back feedback and things burble and bibble as the piano chimes its funereal chime. The riffing bass on last track Toejam Boxdrum is the riff to carry you all the way back to its intoned beginning.

I get the feeling that all parties involved are chuffed to mint-balls with what they’ve created here. Plasma Splice Trifle is a work of great depth created by two parties which I imagine have a lot of common ground between them. The more you listen the more it gives. I’ve had it clamped to my head for the last few days and now that I’m totes familarz with it I’m getting all evangelical. I’ve no idea what that covers all about though. Looks a bit Blodwyn Piggy to me.