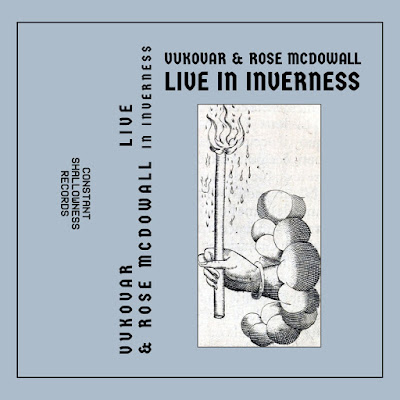 A cassette surreptitiously shoved into my hand in a pub in Halifax yesterday lunchtime accompanied by a sotto voce ‘you didn't get it from me alright and don’t mention the ….’ I don’t do drugs but I should imagine plenty of drug deals go down like this; a minimum of talk, a passing of goods and then a parting. I shoved it in my pocket promising to give it a listen and not mention whatever it was that I wasn’t supposed to mention which I can’t remember anyway because I’d had a few glasses of vino by then, which whilst not my normal lunch time tipple had the great benefit of making Halifax appear welcoming.

A Bald Heads of Noise convention in what was once Dirty Dicks, a half timbered pub that has now reverted back to its original name of The Royal Oak, which is what it would have been called when Peter Sutcliffe drank there. And there’s Pete’s Pisser just inside the main door. Pissing up against the same wall as a serial killer. How many more of you have done the same and not realised it? How many gallons of piss have gone down that urinal porcelain hole since the day the pub opened? How many of us have nipped outside for a fag and been offered coke and ket? On a Saturday lunchtime? Yes your honour. Not me you realise. It’s just a rumour that was spread around town.

Rose McDowall was one half of 80’s polka dot popsters Strawberry Switchblade. Maybe she still is? My contact with the ongoing nature of pop music is virtually non existent. Vukovar I thought were called Vvkovar but that was just the font confusing me. I think they like black clothing and have offered up endless pints of chicken blood at shrines dedicated to Nick Cave and Ian Curtis. I once saw Nick Cave in Brighton, he was wearing an expensive looking powder blue cashmere sweater, sensible slacks and black boots, an outfit that looked like it’d been bought in Italy from shops whose prices exclude mere mortals. Then I  saw him again the other week in ‘Wings of Desire’, Wim Wenders filming him and his band in a run down East Berlin hotel, Cave turning in a blood curdling performance. There must be a law that says you can’t escape the pull of Nick Cave for more than two weeks. Maybe that’s no bad thing.

A true tape bootleg sound with lots of audience chatter during the quieter parts, muffled bass that still sounds great, drums that sound like they’re made from Tupperware, where McDowall’s voice floats like ethereal flotsam, an undulating ephemeral ghost-like wail wrapped in tattered Nottingham lace, spiders webs and too much reverb. Male Vukovar vocalist doing guttural low register Elvis like Ian Curtis drawls. I imagine him hunched over the mic, clad in black leather, a young Alvin Stardust with a shiny chromium chain hanging from his back pocket. The band are bass heavy, military medium, face the front, straight ahead pace hardly shifting thud thud thud Gothbusters meets Joy Division. Last track is Mutiny in Heaven because it has to be.

If you follow the link below you will discover that this cassette costs an eye watering £13. The price of fame perhaps but with only a handful of the 88 copies left they must be doing something right. You can have my copy for nothing if you can answer the following question correctly:

How many bald heads were there in the Royal Oak yesterday?