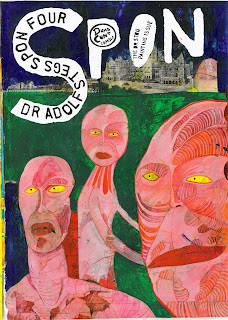 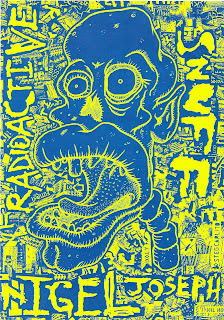 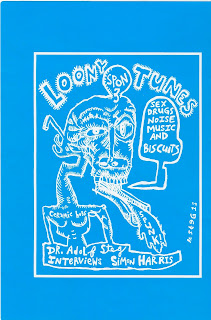 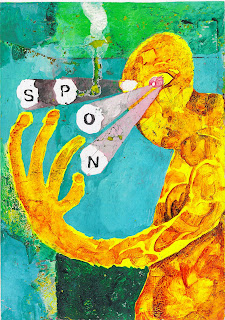 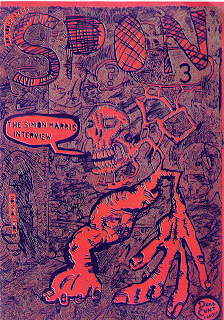 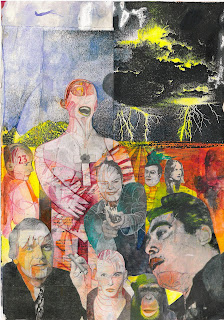 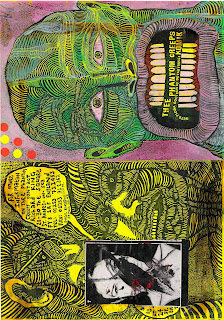 SPON
Dumb Cunt Comcs
A4 Zine. No idea of cost of trade status.

Two issues of SPON appear. One contains nothing but Dr Steg’s paintings, collages and montages some of which I’ve reproduced here. The reason I’m getting excited though is issue 3 which has an interview with the Ceramic Hobs main-man Simon Harris. For anyone even half interested in the Hobs this is essential. Harris’s deep understanding of serial killers, conspiracy theories, Phillip K Dick and Power Electronics are all brought to the fore whilst for long time Hobs fans there’s the chance to discover the hidden meanings in a number of Hobs releases and why Harris’s relationship with long time Hobs collaborator and guitarist Stan Batcow soured. The paintings aren’t half bad either. These publications may be slight - eight pages at most - but that doesn’t make them unimportant. Seek out.
Posted by Idwal Fisher at 3:28 pm 1 comment: Links to this post 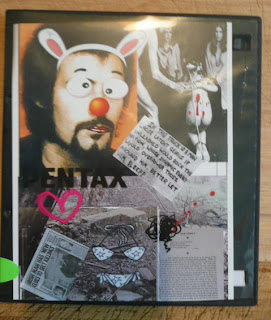 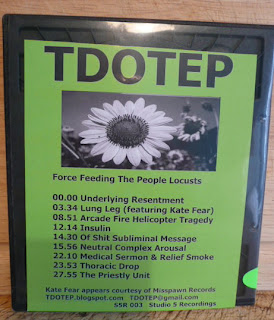 I don’t know why I feel this way but whenever I listen to a TDOTEP release [an acronym for The Death Of The Enlightenment Project] I feel like a kindly uncle passing on pointers in life to a confused teenage cousin whose just experienced his first ejaculation. Maybe thats because TDOTEP releases usually arrive with a note saying ‘heres my latest piece of crap’ or somesuch and then you listen to them and whaddyaknow? theres a not half bad noise album lurking in there. Despite the self deprecation the last TDOTEP release that came this way [Temple of Wounds - Pumf] went some way to convincing me that TDOTEP was heading in the right direction but after feeding myself with the locusts I’m not sure if that gravity defying trajectory has gone all limp and is now terra firma bound with just a sudden bump waiting for it.

Maybe I’m being too harsh?

Kate Fear from the Ceramic Hobs appears on track two [though what she’s up to I couldn’t tell you].

Comes in a half size DVD cases with art work that drops out and is ill fitting. This may sound pedantic but if you’re going to go handmade then make it handmade not some halfway house between handmade and made to look like it was bought in a shop made.

Segueing all the tracks into one long track and then printing the running times in chronological order.

Track five [Of Shit Subliminal Message] sounds like a Slogun outing crossed with the Predator soundtrack.

Track nine [The Priestly Unit] Like Non gone wrong rather than the real Emil.


Yes, maybe I am being too harsh but these things need to be said. TDOTEP has greatness within itself its just that somewhere along the line its all going wrong.

www.studio5recordings.blogspot.com
Posted by Idwal Fisher at 7:27 pm No comments: Links to this post 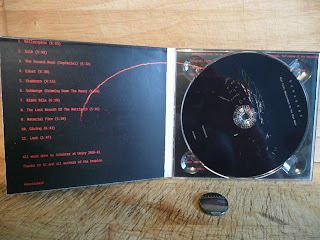 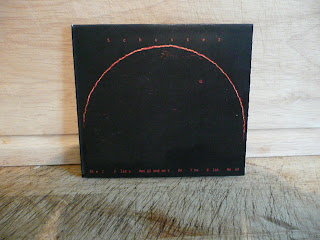 [Also available via Licht Und Stahl in an extremely limited run of 20 cassettes.]


Blac Flies Resplendent On Blak Moon is one of those highly polished Industrial Ambient outings where upon playback you start to count off the Industrial samples on your fingertips only to quickly realise that you’d need the hands of a dozen TG acolytes to finnish the job off properly. Within eleven tracks and almost an hours worth of material I was indeed transported and whilst sat crossed legged in the middle of my inverted star [thigh bone in one hand, fly whisk in the other] I was submerged into that familiar world of murderers monologues, house flies trapped in bottles, Paul McCarthy groans, bowl rings, vocals treated to sound like Darth Vader crossed with a Tibetan shaman, water bubbling underground, vinyl surface noise, machine blasts, sonar bleeps, reverbed vocals, astronaut chatter, street rioting … there they all were, waiting for me to check em off and write em down. Now where’s my I-Spy book of Industrial samples when I need it?

This may enlighten you further: Blac Flies name checks Rudolf J. Mund, an obscure member of an obscure Nazi occult outfit, Andrew McAuley who disappeared one day in his Kayak off the coast of New Zealand in 2007, contract killer Richard Kulkinski, reggae star Dr. Alimantado [?] and others too obscure even for Google. Here are some other things to think about: track four ‘Esbat’ isn’t just 30 seconds of insect chatter its also the name of the Wiccan full moon festival. First track ‘Bellerophon’ is also the name of a mythical Greek hero. Third track mentions “Sepharial’, the chosen name of English Occultist Walter Gorn Old. Seventh track; Blakk Bile, meaning, I assume melancholia, depression or maybe some kind of Masonic ritual. Wrap all these occult/pagan trappings into some bleak Industrial landscapes and you have yourself a damned good Industrial/Pagan/Occultist/Ambient workout.

But first lets go back: the previous Schuster release ‘Breaking Down Into His Own Oblivion’ [also on Adeptsound] had the outstanding track ‘I Am Living In My Own Corpse’, a backbone track, a bleak masterpiece of desolation the likes of which gave you some idea of what it must be like to be dumped onto the barren surface of a dead and windswept lonely planet. This is what ‘Blac Flies’ is really missing, a solid twenty minute track that pins it all together. Too much is gone before it has time to settle. I personally wouldn’t have minded the 10th and best track on here ‘Giving’ expanded up to the twenty minute mark but after six minutes and 43 seconds its all too sadly gone.

You can’t deny the heritage though - English Industrial down to their [thigh] bones and no doubt sporting bad haircuts and a healthy dose of misanthropy to boot. A couple of releases in 1988 and then nothing for nigh on twenty years. I think I know one member. The Adept website mentions Dieter Müh and the sleeve mentions SC. Step forward Mr. Cammack. Discogs gives the rest away by naming Tim Bayes who I think I’m right in saying was a fringe member of DM in their formative years and is the man behind Adeptsound. But back to the music.

My big complaint of Blac Flies is that its hardly treading new ground. The mumbled vocal on ‘Sulk’ is so close to TG’s Weeping that its hard not to think of anything else whilst listening to it. The strings that see out ‘The Second Moon [Sepharial]’ could have been plucked straight from one of Arvo Pärt’s sacred minimalist pieces. The Industrial pummel on ‘Stubborn’ is Pan Sonic mutating into Paul MaCarthy grumbles and moans. The murders confession on ‘Giving [who I’m guessing is the afore mentioned contract killer  Richard Kulkinski] plays out to a background of cicadas and distant ritual drums and whilst this is highly effective [‘the rats used to eat them’] it was almost as if I was half expecting it.

I now find myself in the curious and slightly embarrassing position of playing down what is obviously a classic piece of Industrial music - which probably says more about me than it does about Blac Flies. Having said that and put an ever so slight damper on it, I have to say in its defence  that this is still a criminally good release made with perfectly weighted hands - Grade A Prime Industrial Ambience with a soupcon of ritualism and the occult thrown in for good measure. Blac Flies Resplendent On Blak Moon may not be progress but neither is it Industrial music by numbers. Just don’t give Chris Bohn a copy.

http://lichtundstahl.blogspot.com/
Posted by Idwal Fisher at 11:16 am No comments: Links to this post 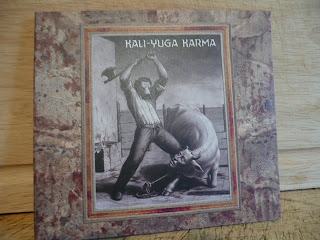 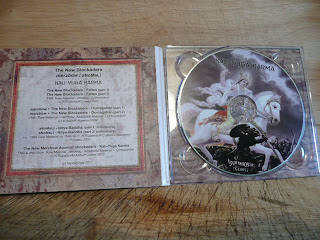 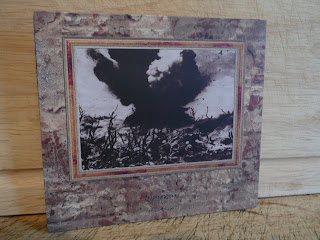 
Paul Coates is the quiet man behind Hypnagogia and the even quieter man behind noise project aNoMaLi.  Hypnagogia is a spasmodic affair which since the early 90’s has released items of a discordant nature but which I think is mostly remembered as the home to some the best of The New Blockaders output - the apex arguably being the mighty 4CD anthology ‘Gesamtnichtswerk’. That’s not to treat everything else Hypnagogia has released lightly though. During 2003 and 2004 Hypnagogia released three ten inch platters that were Falten by The New Blockaders, Oumagatoki, a collaboration between TNB and Merzbow and Nitya-Baddha a solo aNoMaLi outing. Kali-Yuga Karma brings them all together and as an added bonus/dangling carrot/cynical marketing ploy [select which ever reasoning fits your preference] a track called Kali-Yuga Karma that is a 5 minute and 38 seconds collaboration between all of the above. Its best to start here ... with a cow mooing. It also ends with a cow mooing, apart from some almost insignificant squiggle that appears a second before the track ends which I cant for the life of me think has been put there except as some kind of listener test. After the first cow moo comes the playing of the last post and gun shots [probably lifted from a 50’s cowboy movie] and then a countdown from 5 to 1 before a full on face rubbing, ear pounding, head bashing swirling torrent of noise. It couldn’t have been anything else really and if it had I think I may have been a little disappointed.
Its not as full on as Oumagatoki though which is a slow to build beast featuring some lovely low end Merzbow wobbles and some close up decay ear fracture from TNB. Very similar to the Merzbow/TNB CD Ten Foot Square Hut which appeared around the same time and which no doubt came from the same sessions. Falten finds TNB in sparse decay mode - all needle fluff, scraping sledgehammers on concrete floors, galvanised bin destruction. Certainly one of their better outings and comparable to the best of their earlier work. Amongst these titans of noise we find aNoMaLi whose Nitya-Baddha sits between them like a naughty schoolboy with ink on his fingers. aNoMaLi achieves his sounds by mixing samples of North East dj’s and dart scorers cut off in their prime [ONE HUNDRED AND EIGHT], Indian movie soundtracks, murky conversations, all of this loaded onto prime noise detritus: dentists suction pumps, buzzing noise drones, TNB like rain clatter, reversed church choirs, reversed vocals, 60’s pop. Its not a million miles away from that other TNB involvement Mixed Band Philanthropist in that it has humour at its heart whilst enlightening and rewarding the ear with a multitude of sounds. It’s a pity theres so little aNoMaLi about. Two releases as far as I can ascertain.
Paul Coates may be a reclusive figure in the world of noise but his label does release the occasional gem. And although this may be just a bit of archive gathering with a dollop of cream on top that doesn’t mean you should pass it off lightly. I’ve reviewed all these before upon original release, I enjoyed them then and they still stand the test of time now. A useful release for those who missed out on the original vinyl and those TNB/Merzbow nutters who must have everything.


Posted by Idwal Fisher at 12:29 pm No comments: Links to this post