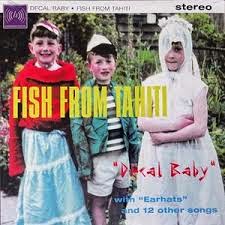 
Who are these Feeshes from Tahiti? Leetle Feeshes. From Taheeeti. Obscure beyond words. A band with no web presence on a label with virtually no web presence, or presence that's of any use [HS website front page is still showing the flyer for last years Soundclash show in Belgium]. Type in ‘Fish From Tahiti’ and you will get just shy of a million hits with just shy of a million of them being information and pictures about fish from Tahiti but there at the top of the pile is a Youtube video of a Fish From Tahiti release called  ‘Weird Noise E.P.' Which since being uploaded two years ago has garnered a meagre 304 hits and the one comment [‘Top’] which totally un-oddly enough doesn't appear on this collection of obscure beyond words singles and compilation submissions and unreleased material.

So far so normal then for the label that has for years been more than comfortable shuffling around in the brick gaps of the, dare I even say it, ‘underground’.

What better to confound those who have come to Harbinger Sound via the Sleaford Mods. I am a Sleaford Mods fan hence I go out and buy everything that appears on their label because, QED, I must like everything that label puts out. But this is no Sub Pop here, no Domino. If you are a Sleaford Mod fan on the bus home with Decal Baby under your arm you are going to be baffled, confounded and perhaps upset when you get home to find that your two pronged social despair attack and angst has been replaced by 14 tracks of looped dub upon which straight lifts from language tapes have been layered.

Its not all like that of course, although I must admit to liking the French and Mandarin voices I’m hearing. In some instances there are rapid drum and bass assaults and things that sounds like Milk From Cheltenham outtakes and 1930’s jazz dance bands but for the most part we’re in crumbly loops of dub with added things territory. Things being either squiggles of electronica, or English lessons as read by 50’s BBC announcers or just plain old weirdness. Depending on your point of view this is either the bastard offspring of Paul Hardcastle’s ’19’ or the demented re-workings of the Art of Noise by people who went to Dada School.

What lifts this from such drollery is its obscurity and repeat play-a-bility. I dare say that the Fish From Tahiti fan club could easily fit into a Volkswagen Polo. A car that could take them to gigs that they’ve never played or record fairs where their records never turn up. In the meantime you have this LP. Just don’t ask me where you can buy it.

Daniel Thomas’ Sheepscar Light Industrial label keeps to its perfectly timed release schedule with three more perfectly timed releases. I’ve reviewed the previous 27 and as far as my now rapidly withering braincells recall I don’t remember reviewing a duff one. Or even a less than interesting one. Horrible word ‘interesting’. How do you like my new coat? Oh, its interesting. A noncommittal weasel word that gets you out of a hole when needs be. Like here.

Sheepscar Light Industrial is what I think of when I see the dead pubs at the side of the M621, or the rain making the suburbs of Leeds look grimmer than they already are. Its the same grimness felt from reading David Peace’s Red Riding Quartet [and if you haven’t and your penchant for uber noir Yorkshire grime runs deep then I urge you to investigate]. I see the stark brutalist edifice that is Millgarth police station and I think of David Peace’s 1974 and Sheepscar Light Industrial and the sodium lights that barely brighten the flyovers in Beeston and Hunslet. Leeds and its Ballardian industrial estates and edge of town shopping centers and overpasses and the long road down through Hunslet past the Tommy Wass where it always rains. This is where Sheepscar Light Industrial fits in. Its what comes to mind when I hear something by Daniel Thomas or David Thomas who together are Hagman or with any [and many] of their multitudinous formations and labels.

Hagman - The two Thomas’s with two ancient computers talking to each other. The gentle beetling of corrupt data chatter. Information exchange eventually morphing into something that is a dysfunctional rhythm. Something giving you just enough to hold on to, to help you carry you along on your trip from Sheepscar to Mabgate.

Michael Clough’s MetaMachineMusic is all pneumatic drill’s combining in to a two way drone where the analogue cycling is underpinned by a flat out shortwave radio line that phases and undulates throughout. I think it was Seth Cooke who took to task the council workers digging up his road at 7.30 in the morning by taking that drilling sound and turning it in to something far more listenable. Clough, a one time resident of Leeds and no stranger to its murky edges, has done the same here albeit ending up with something that modulates into something with far smoother edges. I dare say that an analogue synth has played its part here ironing out that drill until its a munched up mess of shortwave fizz and out there drone.

Campbell’s work under his own name is shorn of the far more in your face electronics of his Astral Social Club stuff and here is no exception. Hear a one second vocal stutter, an electric guitar played with a sawing horse hair bow, chirpy birds, a clanging drone. Like being stuck inside Big Ben with your grannies budgie at midnight. Here you can luxuriate in the grates and grinds. This is no disco remix. But it is, I’m reliably informed, an edit of a recent live performance. I hear the words ‘fish and chips’ as the thing beast disappears around the corner.

I have been quiet for quite some time and physical copies of these will have no doubt long since gone, but fear not for reward can still be found online.

Posted by Idwal Fisher at 10:21 am No comments: Links to this post