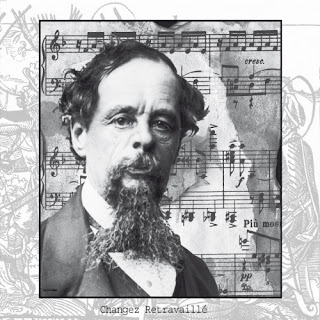 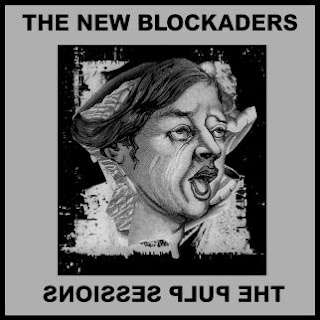 
Changez Retravaillé is the three CD, thirty track compilation that pays homage to The New Blockaders first and most influential 1982 album ‘Changez Les Blockeurs’. Its also the one that Howard Stelzer took displeasure with in a review that appeared via Vital Weekly. Stelzer’s unhappiness stemming from the fact that we’ve had enough TNB tributes already and that some of the contributions either sound too much like the original source material or too much like themselves, Nurse With Wound being the biggest culprit for offering up a contribution, hot on the heels of an an entire LP’s worth of the same, that to his ears sounds exactly like the original.  Stelzer has a point but only up to a point and this is certainly not a ‘pointless’ release. I’m not sure what the remit was here, maybe it was just to ‘retravaillé’ that being to rework or maybe there wasn’t a remit at all but we all know why we’re here, even if it doesn’t mention it on the sleeve, this is a tribute.

Then you have to remember that some of those contributing can punch their weight; Merzbow, Thurston Moore, Jim O’Rourke, GX Jupitter-Larsen, this isn’t ‘My Best Mates and his Best Mates Knocked Together in Three Weeks Tribute to Changez Les Blockeurs 3 x cdr Wrapped in a Beethoven Symphony Manuscript Box Set Limited to 50 copies Chucked Together Piece of Shite’ and while not everybody has a slot on a shelf in Tower Records Shibuya all are respected artists. Talking of which I quite like the fact that Thurston Moore’s five minutes of string scraping and musical box twanging is one of the best tracks on here but that doesn’t mean I don’t like Nurse With Wounds track any the less for it not being a mind bending slice of outré sonics thats the best thing they’ve done in thirty years. Chances are that if you like any of the 30 artists/bands appearing here then there’ll be very little that disagrees with you.

For my own amusement and self satisfaction I divided these 30 tracks into four loose categories:

3 - Those that sound like the original recording has been worked in to the contribution.

4 - Those that try to recreate the original recording.

That means that The Prestidigitators offer up a haunting track of leather oar strap twisting, groaning and contracting materials that would be a ‘4’ on the list. The New Movement [obvious TNB acolytes and a shoo in for this comp] who I reckon had thee most wonderful time trying to recreate the sounds of ‘Changez ..’  in their own inimitable style, i.e. lots of junk getting chucked around. Another ‘4’. [That nobody has yet to ascertain the true ‘instrumentation’ used on ‘Changez …’  and that nobody has yet managed to recreate its disturbing, fearsome sounds is something to ponder here]. K2, Toshiji Mikawa, Veltz and Merzbow are all saved for an ear splitting finale that sounds just fine and dandy to these ears. Daisuke Suzuki sifts through a wooden box full of knitting needles while those weird howling sounds from ‘Changez’ are heard in the distant background. Veltz’s contribution of atonal scraping and noise is undeniably Changez ...’ like but its been percolated through a few decades of Japanese noise and whats wrong with that? And where would noise in Japan be without ‘Changez …?’  We’ve just come to pay tribute maaan. Arigato gosaimasu.

A tri-fold out sleeve on textured card with an insert full of glowing reviews and praise, info on TNB and an interview that first appeared in C/U/N/T magazine a couple of years back in which it is revealed that ‘Changez …’ was indeed recorded in a garden shed may go some way as to explain why Italian label Ricerca Sonora had difficulty in getting this out there. For this reviewer at least it was well worth the wait.

Derek Jackman is a name sadly missing from ‘Changez Retravaillé’ but through Organum and his label Aeroplane Recordings we have a single that has become almost, if not ‘as’ influential as ‘Changez’. A collaboration between Organum and TNB the 1984 single ‘Pulp’ is a more mystifying slice of what was going on back then. I don’t have a copy of course. No surprise there and what they’re asking on Discogs for copies it seems it will remain that way but I was once in a room where a copy was produced and as Tristan Tzara is my witness I swear that people drew breath at the sight of it.

‘The Pulp Sessions’ are the extended workings from which ‘Pulp’ was realised. The results being not that far removed from ‘Changez Les Blockeurs’, in that we have two sides of constant churning, clanging, squeaking, stamping, shuffling and destroying sounds of an indeterminate nature that could have been recorded with various items of metal junk in a shed in the North East of England during a rain shower some time in the early 1980’s. Though whether Jackman ever made the trip to that shed in the North East or TNB visited Jackman’s shed is unknown to me. These are more austere recordings, denser with Organum filling out the sound. But with what? Who knows. Maybe whats missing is the shed itself. ‘The Pulp Sessions’ wont carry the same gravitas as ‘Pulp’ which we can put down to the passage of time but these two twenty minute tracks are still a reminder that way back in the early 80’s a brave few were making noises that’s still reverberate today.