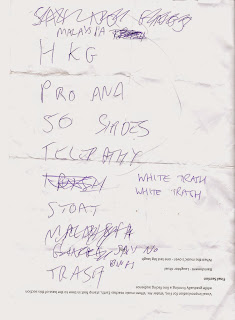 Having been to many a noise gig at the Brudenell, in the days where a gathering of 25 was deemed a success, I’m more than a little alarmed to find myself pushed up against the back wall with one arse cheek clinging to a bit of seat backing for purchase. The last time I was here they had tables set out cabaret style, now its just shiny black contract flooring and later, a wash of crushed plastic pint pots and Red Stripe cans. They have proper door staff  too and Underwood has his work cut out manning the merch table. Am I still in the Brudenell or have I, by some mystery of the space time continuum, been transported to a parallel universe where rabid punters throw tenners at you for band t-shirts and the band actually mean something and have worth and gravitas and could spend the night pissing up against the posters advertising the upcoming non-entities and nobody here would complain. Well, not much.

From my precarious perch at the back of a crammed Brudenell it soon becomes apparent that Jase Williamson’s voice is teetering on the brink of disintegration. Months of hard touring has done its damage but the audience appears unconcerned instead singing along with unfettered joy whilst producing football terrace chants with which to raise a plastic pint pot to.

But first the Ceramic Hobs who by their very nature are either falling out, falling in, crashing down the side of a drunken wave, dying, being sectioned or being unpredictably brilliant. Tonight, with a decent sound system to work through, they manage to produce a performance that bridges gaps between punk, rock and psychedelic insanity. The chords are chunky, the clown rubbing the babies head is spitting electronic sparks, the keyboard player doesn’t play it with her arse, singer Simon Morris wears a Grateful Dead baseball cap, a Venetian opera mask and a Whitehouse t-shirt and reminds us that he has one of the best voices in the business. He’s also singing in his underwear. The drummer keeps time, especially on the tricky Hong Kong Goolagong [a sexually ambiguous Australian Aboriginal hitchhiking demon, if you must know] which wavers all over the road like a drunk driver with no air in his passenger side tyre. The guitarist stage left throws playing cards into the air with random words written on them. Morris holds up a small Dr Steg canvas with a cutting from the local Blackpool press documenting the case of an old lady who committed suicide on Christmas Eve. As they've been doing for a while now Morris ends things with an a capella version of Mr Blue Sky. This is the kind of band that needs to be on the Sleaford Mods support list. There is no more room in this life for indie landfill, bored rock, prima donna wank guitarist who think that their next big break is just around the corner. Give us the Ceramic Hobs and Makakarooma and their ilk and leave that tired indie shit to the students and the sales reps.

JB Barrington is the Manchester poet I last saw supporting Sleaford Mods in Hebden Bridge. He’s John Cooper Clark crossed with a Tourettes afflicted Tom O’Connor. His best poem is his first which is about greed and the predictability of everything being done for moneys sake [ever wondered why your local’s now a Tescos Express, ever wondered why wars are always fought in oil rich countries..’]. At Hebden Bridge he got heckled by a feminist who took exception to him using the ‘C’ word in a derogatory manner and like all pros its now in his set. As is the odd gag and biting social observations. And after a short fifteen minutes worth Andrew Fearn appears with his laptop.


Witnessing the rise of Sleaford Mods is a new one for me. The kind of bands I take to normally wander around in the darkened corridors of obscurity until they eventually die of disinterest or boredom all while making horrible noises. To see Sleaford Mods being praised in the media, selling out tours and most importantly, making the most relevant music this country has heard since the early 80’s gives me a warm feeling inside that can only be replicated by several brandies and cat videos on Youtube. I’ve never been to a gig before where people recite sections of lyrics to each other whilst making their way from the venue. Something is happening here. In several fleeting years Sleaford Mods have quickly risen from obscure label curiosity to arguably the most important band in the country. In fact, take away the arguably, I can think of no other band that are as culturally relevant at a time where, as a country, we are staring down the barrel of another five years of Tory governance. Is it too much of an exaggeration to say that we could be at the start of something big here?  Two blokes and a laptop are making 99% of music being made today sound irrelevant. And that's because it is. Our airwaves are a constant stream of spongy blobs of nothingness, servers are crammed with the meaningless twaddle of dilettantes, ears are filled with the inconsequential drivel of faded rock stars, socialites, wannabee’s and never will be’s, people so far detached from the comings and goings of ordinary people, so surrounded by a constant coterie of fawning acolytes and blind fans that they mistake what they do for worth. It has no worth. It is worth-less.

Sleaford Mods have taken a sharp axe to the tree of rock and have felled it before our very eyes shitting on the stump as they do so, ’twenty five years its taken me to get here and its fucking shit’ croaks Willaimson. As they come out for their three song encore the real juice of the evening is in the second and new track ‘Tarantula’, a more mellower offering from the new album that, if I got this right, is about those poor bastards risking life and limb aboard leaky boats trying to escape misery and tyranny. How many bands do you know writing songs about that?

That Williamson manages to get to the end of the quick hours worth of a gig is a miracle of sorts. I half expect his voice to just disappear, his jaw going up and down with nothing but the odd squeak emerging. The full house at the Brudenell wouldn’t have given a toss. They’d have swept the pair up carried them through the street of LS6 like kings aloft singing Jolly Fucker and Tweet, Tweet, Tweet and any other of what are now becoming classics until they came across a slop shop and bought them curry and beer until the sun came up.


Posted by Idwal Fisher at 2:29 pm 4 comments: Links to this post