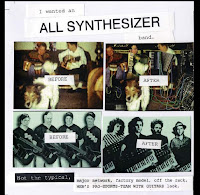 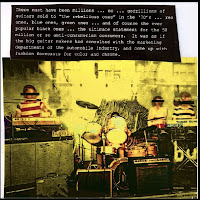 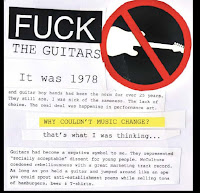 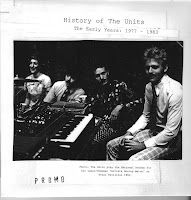 History of The Units - The Early Years 1977 - 1983
Community Library CD CL16
What amazes me is the fact that you can get through nearly half a century of living without even knowing that a band like San Francisco’s The Units ever existed. And then you get your hands on this and you realise why persons of a certain age, usually male and nearing fifty, get all excited at the mention of obscure bands who only cut a couple of singles and maybe an LP before disintegrating into history dust nearly 30 years ago. Usually I’m not the type to get all that excited about the mention of obscure bands but after cranking these 21 synth monsters up for the last few weeks I may find myself turning into one. As an example; whenever the bald heads of noise find themselves around a pub table a band will crop up in the conversation, say The Screamers and Underwood will go “fuck yeah, The Screamers, their first single on Meeuw, 400 copies, red vinyl,1978, I’ve got two copies and Thurston Moore wanted to buy one off me for £200 when I DJ’ed No Fun but I told him to bollocks”. Years ago in pre internet days I sent the Undermeister a track I’d taped off the John Peel show in 1978. I had no idea who the band were except that they were French and that there was a heavy synth sound to it. Back comes a jiffy bag containing a tape with all their stuff on it and Xeroxes of their single sleeves. The track turned out to be Hystére Connective and the band were French synth punk pioneers Metal Urbain.
At the same time in San Francisco The Units were going that one step further than Metal Urbain by abandoning their guitars all together in favour of an all synth line up [and drums of course]. The theory being that you couldn’t be reactionary with guitars seeing as how by their sheer ubiquity they were part of the mainstream. They even went as far as to paint all their gear battleship grey, do away with a frontman and screen projected films at their gigs in further bids of non conformity and a chance to indulge in the performance art scene that was rife in San Francisco at the time. I know all this thanks to the enclosed booklet - a shining example of a labour of love from Portlands Community Library team.
But this is not all three minute angst from a bunch of misanthropists, there’s prog keyboard flourishes and instrumentals too [they composed soundtracks] which is pretty good as it is but its the early singles that captures the mood best such as on Cannibals with its rampant tub thumping, waspish buzz and rabid stream of vocals. High Pressure Days is a scintillating swirl of monster synth and 4/4 stomp thats easily as good as anything Devo ever got credit for. Warm Moving Bodies is urgent pop delivered in military fashion. Of the 21 tracks on offer its hard to find fault with a single inclusion. Community Library even have the sense to let the Pope of Punk and San Francisco's Mabuhay Gardens emcee/promoter Dirk Dirksen announce the band thus setting the scene without the need for a dodgy live track. And after slagging off the audience and mixing up the bands name its a treat from start to finish.
The Units began as an eight piece in 1978, in San Francisco before settling to a more manageable three. They chew up a dozen or more members, cut a few singles along the way and implode on Epic/CBS with a Bill Nelson produced album that never gets to see the light of day after having dented the disco charts in America with a track thats not even on here. Therefore they have all the right ingredients for a retrospective such as this and for once its a truly deserved and perfectly weighted release. Too often the urge to include every outtake, b-side, fart, click track and poorly recorded live outing proves too strong and the end result is a three CD set of stodgy proportions [see The Homosexuals ‘Astral Glamour’ release on Messthetics for a good example of how to over do it]. Here we have 21 tracks of what synth punk was all about and its perfect. I could go on; the origins of their name, the Trakstod Station [Californian hair rockers] cover, the alienation and swooping melodies but I guess you’ll just have to find that out for yourselves.
I don’t normally get material such as this through the door. Maybe Community Library has picked up on my enthusiasm for all manner of analogue synth in the shape of Emeralds and early English synth pioneers like The Future and more lately Vice Versa, whatever, I’m glad they did. History of The Units is released on the 15th of June on CD and thereafter on vinyl and MP3.
Contact:
www.community-library.net
www.myspace.com/warmmovingbodies
www.synthpunk.org/units
Posted by Idwal Fisher at 2:46 pm