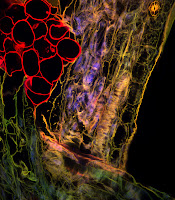 Its a taken for granted piece of software these days but I still get a kick out inserting a CD into the computer and finding all the track information appearing on the media player - for someone who remembers the days when you had to get up off your arse to switch TV channels [all three of them] its like alchemy. Even the most obscure of releases seems to have been dutifully transcribed by some eager listener. Bacterium was no different but what brought a wry smile to my face was that under the column ‘Genre’ were the words ‘Unclassifiable’. Which is ridiculous of course, there is no such thing as unclassifiable any more. Every major genre of music you can think of has numerous sub genres and then there’s all the new sub sub sub genres that appear at regular intervals where ‘x’ multiplies with ‘y’ to produce a ‘z’.
But what to pigeonhole Bacterium with? I always favour ‘Industrial Ambience’ but with a push you could nail it with ‘Dark Ambience’ but then maybe thats a bit too Cold Meat Industry. Post Apocalyptic Industrial Ambience I’ve used before too but today I’m going to go with Industrial Noise Ambience With Slight Ritualistic Tendencies And A Leaning Towards Noise And Experimentation. It’s a tad clumsy I know but it may just stick.
We’ve been here before, most recently with the various artist comp Stählerne Lichter, with which this shares a number of artists, but whereas that release contained several real stinkers Bacterium’s bad contribution factor is but the merest ripples on a smooth mill pond of excellence.
Theres some unfamiliar names to conjure with first [to these ears at least] most of which would appear to be worth further investigation; Psychogeographical Commission’s eerie chatterings are sublime, Maison Close’s noise blizzard coupled with stressed female vocal sample would appear to hold much promise and Josef Nadek’s contribution will have the Apocalyptic Power Electronic genre fans going all weak and weepy. French duo DDAA’s track finds them mixing treated harmonica with electronic burbles, strings and deep throat vocals the end result sounding like a cross between Jac Berrocal and Extended Organ. Sevan_Oh veer into Illusion of Safety land with two looped vocal samples played over each other to a background of slowly morphing keyboard work and the merest hint of a trip-hop beat.
This is no reason to gloss over what is offered by the more familiar names, Dieter Müh, Column One, Schuster, N.Strahl.N, MNEM and Cheapmachines all weigh in with some prime Industrial Ambient groan, which is nothing less than I expected. The only runt of the litter is Praying For Oblivion whose three minute noise stab appears like an unwanted grease stain but that aside this is an excellent release.
My only big problem is with the packaging. Dulled out grey font on a glossy black background never goes down a storm here but it may explain why the online database has Schuster down as Chuster. It’s still doesn’t explain ‘unclassifiable’ though does it?
Comes in a digipak with 12 page booklet.
Contact: http://www.adeptsound.net/home.html
Posted by Idwal Fisher at 7:28 pm

hi Mark, this is unrelated but as good a place as any to post it - do you still have an email ? couldn't find it on the blog, anyway here's the video you wanted to see.

Jase. Got some stuff to post r.e. DK720/MOTTR. Maybe tomorrow.

Cheers for the link.