The Lowest Forms of Music 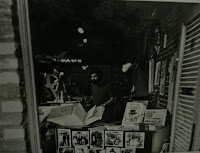 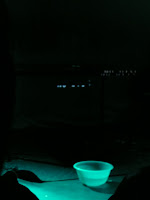 
Sunday and my sensitive brain has taken a hammering. So what I need is some smooth loops and analogue deliberations which is where Bill Kouligas and Joseph Hammer come in. Another collaboration that worked well. Saw Hammer at last years Colour Out of Space and he went on for what seemed like an age but here, with about thirty minutes to get it all in, it worked a treat. I managed to find myself at the front of the stage [almost] for Raionbashi and Kutzelina whose noise drone ritual included the elaborate washing of hands and face each time nailing the used towel to bits of wood. A low dog like growl slowly increased in volume until a whistle blow and then a double reading of Germanic text [which seemed to amuse the German speaking members of the audience but of which the only words I could detect was ‘salt and pepper’ showing just how shit my German is]. Then came the yodeling from the lovely Kutzelina and short stabs of painful static from Raionbashi the whole while the thing building into a pressure cooker atmosphere until they cut it dead.
And then some LAFMS Tom Fuckery, first with Dinosaur With Horns which I think was just Rick Potts and then The Tenses, a Smegma side project with Ju Suk Reete Meate and Rock ‘n’ Roll Jackie whose sound is a little like a stripped down Smegma with soaring tremolo guitar, run off groove static and tiny clockwork toys held aloft in one hand just that one sound playing at its conclusion. Then the appearance of Hijokaidan. After five minutes of what appeared to be them tuning up [like uh … ] main-man Jojo Hiroshige, with a tightly wound skull cap stuck to his head and Gibson SG strung around his neck pushed the button and filled the space with wall shuddering noise. With Junko [the Sheila of Shriek, the Sultana of Scream] yelping away like a hyperactive puppy with its paw trapped and Incaps Kosakai doing the electronics they soon managed to whip things up into a shit-storm of mayhem. Jojo began the mock whipping of the audience with his guitar, the drummer sounded like he’d got four arms, mic stands got chucked into the audience, bodies got thrust into the air [crowd surfing - I fear for their heads if they get dropped - me being a sensitive, caring type] Jojo actually handed his guitar to the audience and fought like buggery to get it back again, Junko’s yelping seemed to pierce my eardrums. It all sounded totally insane. The PA had done its job at last and then, for the second time in two nights, Kosakai dived headfirst into the crowd. Ta-da.
Afterwards, outside, we head for the German bar. It’s closed. 11.30 on a Sunday night in the capital and we cant get a drink. As usual I never did get to say my goodbyes, just shuffled off to the hotel with the Thames on my left and happy memories in my head.
On the final leg of my return home I’m on the bus from Leeds to Cleck and to drown out the sound of the school kids on half term chaos I turn on my mp3 player and turn up the volume and by sheer chance Japanese Super Heroes comes on and I was back watching Le Forte Four in that bricked archway in Lambeth with Jackie giving us all the double thumbs up and it all seemed so perfect. It’s a beautiful sunny Autumnal day and I’m warmed by the sun glaring in through the windows and the thoughts of the weekend just gone and I’m thanking all those involved in getting this on because it has truly been a special weekend. The likes of which we may never see again.

2) Dinosaurs With Horns was Rick Potts and Joseph Hammer