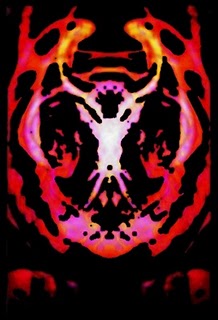 Now that Campbell has ditched mywasteofspace and started his journey into blog-land I can reveal the inner workings of the Early Hominids work cycle; they drink beer and shove pizza down their necks. And then, over the course of an evenings experimentation, sounds appear that would be equally at home in Mirfield’s Panache [long gone 80’s cheesy disco - plasma on draught, punch in the face on leaving] and a Berlin art space. What appeals to me is the fact that Early Hominids are now beginning to find their feet. Their first release [Metatarsal] sounded more Mego than Mirfield, the second [Batley Bathz] more art space than spacey, this is the one that clicks - Campbell’s Astral Social Club vibes and dance/pop head bobbing enthusiasm fits foot in sock with Walsh’s gadget box glitches and oscillations. Layering noises and waves onto looped dance backgrounds of varying BPM’s was always going to be a winner with me. And its filled too. Filled out, fleshed out, full of everything all going off at once delirious and loose like an epileptic on whizz having a fit in front of a strobe light.

So; ex-members of Smell & Quim produce noise dance shocker. Or ex-members of Smell & Quim lay it down phat and noisy after supping ale and shoving pizza down their necks. Or I could dance to this if I’d had enough to drink. Either way I always wanted more dance orientated noise crossover releases and this is definitely one of them. There’s two tracks on here but there’s essentially six segued tracks, one of which feels like it was the plucked from the middle section of an intense jam when A somehow managed to slot into B and the head was right and the body was right -  a perfect piece of unscripted experimentation - that's the epileptic on whizz. There’s slower sections too where it feels like you’re trying to make your way across a muddy field in divers boots but even these feel unctuous and warm like drowning in a lava lamp, you’re a small glycerin bubble being warmed and cooled to the sound of weld spatter hitting a wet floor and bits of Rihanna. Well, almost.

Total Vermin meanwhile, carries on its good work. Ignore it at your peril.