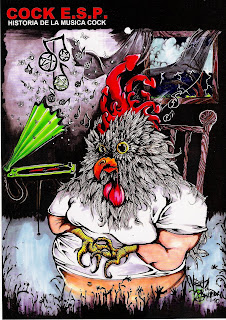 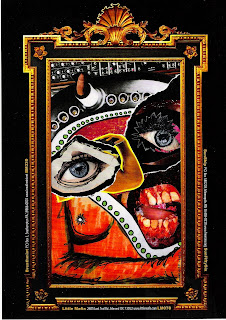 
When coming across a Cock E.S.P. release the thought often occurs to me that they’ve never played the UK. They’ve played a few European dates but for some reason the UK has never experienced their absurd, abrupt, chaotic and some may say even pointless live shows. Continual sole member Emil Hagstrom is a big man who likes to put a comedy chicken head over his own and along with his fellow band members [a varying quota depending on who isn’t injured, in jail or in hiding] destroy whatever equipment they’ve got by hurling it at each other, the walls, the floor and the audience. Writhing about in pools of beer, blood, bar stools and broken glass they produce what can only be described as noise in its purest sense. Noise as a racket, an unstructured, ramshackle blast of spew from which only the fit and the lucky emerge unscathed. Its in the live arena where they really blossom but only very briefly. Most of their shows are done and dusted in under five minutes this being the amount of time it takes them to make all their gear inoperable or lame someone so badly that urgent hospital treatment overrides any quest for noise nirvana. For some they’re still the best noise band around; loud, stupid, fun and never taking themselves too seriously. Their releases [both audio and visual] add much needed dashes of absurdist humour to a genre not entirely known for its ability to raise a smile and their ‘songs’ like their live shows are usually very, very short. The Cock E.S.P./Evil Moisture 5” single contained 381 tracks, this on a format that holds about five minutes of music. Each ‘song’ was but a series of clicks, blasts, grunts and screams [at least thats how I remember it]. I doubt that there’s a Topographic Oceans of noise lurking in Hagstrom’s mind.

Pity the poor bugger then who has the unenviable task of tapping in to Discogs all the details to the 99 tracks that constitute ‘Historia de la Musica Cock’. Billing itself grandly as ‘A Tribute to Experimental Music 1910-2010’ these 99 tracks are a series of short bursts of noise related fragmentation. Its like someone threw a hand grenade down the hole at Hospital Records and captured the sound of the debris as it landed in the street. The longest track is 44 seconds in duration, the shortest about eight seconds, the CD is further broken up into ten separate sections each being given a title [We Are the Duchampions, 4.33 Inches, Anal Fausting, Immature Ejaculation …] but here’s the deal, each track contains Hagstrom working with other people. Most tracks were recorded live between 2009 and 2010 and judging by the amount of people he worked with he’s been a very busy chap. Eighty two collaborators I made it, a disparate bunch including Blowfly, Andy Ortmann, Leslie Keffer, Ceramic Hobs, Rat Bastard, Suffering Bastard [maybe a relation?] and lots and lots of other people I’ve never even heard of including Twodeadsluts Onegoodfuck [a band who can surely only dream of seeing their name in lights].

But what of the release itself. 99 tracks in 38 minutes means that the sounds come at you in a relentless switch back of noise related spazz. Track one is of course a full on blast of ear wax dislodgement there to let you know that Hagstrom really can do full on noise bit [this time with fellow Cock Matt Bacon] from there on in its like having eighty odd artists all demand your attention in a short space of time. At the time of typing track 60 is playing; ‘Betley Welcomes a Very Good Stinky Arse Fuck’ a Joincey Bastard [?] related tune which not only tips a hat to Phil Todd but Smell & Quim at the same time. Track 62 is Froggy Mountain Breakdown a 47 second Costes madrigal with distorted guitar solo and rapid string pluck. Its exhausting trying to cross reference each track so its best just to let them run over you and in this respect it manages to stand on its own 99 legs. Track 83 is 33 seconds of shamans lament, 84 is 24 seconds of some seriously high end sax squealing, track 85 comes in two parts, one part Astral Social Club shimmer the other some thrash. Track 36 is titled ‘Medley’ and manages to incorporate 14 blasts of noise within its 25 second time frame. Its around this time I began to appreciate the sheer amount of work that must have gone into this release, each track has a name, each track can be cross referenced so you can see who was working with Hagstrom, the cover art is great, the packaging shiny and fetching, you could even frame em. I kind of um … loved it in a daft sod way. Its not everyday you get 99 track noise CD’s through the post. And did Hagstrom call it a draw at 99 track because 99 was the maximum number of tracks a CD player could handle? I’d be interested to know.

Perhaps then, the ultimate noise album to give to your ADHD affected cousin? Lots of cocks, lots of fnarr fnarr track titles and if you look really, really closely theres even a knob on the back cover. Where would we be without knobs in noise.