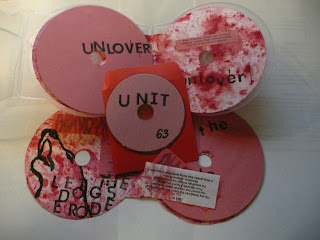 
Amniotic is the work of solo female artist Johannah Henderson who, if I’m not mistaken, was last seen working alongside Jase Williams in the chaotic noise/rock/improv outfit The Mothers of the Third Reich. Here she ditches the random drum bashing of MOTTTR for a far more personal project involving birth. The results of which, in parts at least, are quite a revelation.

Hendersons songs are ghostly affairs, most of them featuring murky bass guitar runs as backbones upon which she layers guitar frills, apocalyptic spoken word prose, piano motifs and field recordings. But its Hendersons haunting vocal delivery and the blurred recording technique which leave the most memorable and affecting memories. Singing lyrics that only rarely appear she buries her voice deep in the mix so that it emerges at times either like a lost soul or a bewitching lorelie. Match this to songs which are at times stripped bare to nothing but single instruments and you have a very effecting delivery.

Its not often I get to review material such as this so this has been a salve of some sorts. I have to admit to fearing for the worst upon opening Johannah’s jiffy bag, Anybody who’s reviewed as many noise releases as me will know only too well the feeling that arrives with the emergence of hand painted CDR’s. I like to be proven wrong now and again though, it keeps you on your toes.

But back to the music.

I was lifted from my cups. I found myself humming certain bass riffs. I downloaded the 27 tracks onto the ipod for midweek consumption [all these tracks, as seems the norm these days, are available for download]. I pondered becoming some kind of Svengali figure taking Henderson from her south coast roots to transport her to worldwide stardom but I fear the reality is that a lot of people just wont get this music and entreuprenuriship doesn't sit easy with me either. These track work because the construction is experimental in approach with the results being entirely listenable in an across the board fashion. Give this to someone trying to wean themselves off indie pap and you have instant success. It works on many levels. The  blood red artwork, torn piece of birth certificate and snippets of paper all go towards making these three releases parts of one birthing whole.

On ‘The Number E’ [second track on UNIT 63] to a background of photocopier noise she bangs away like The Shaggs whilst moaning sweet, mumbled nothings. The track ebbs away on a sweet drooping bass guitar run. ‘The Valley of Wine’ is a simple song with a simple two chord strummed acoustic guitar run with a vocal sample that ends ‘come and see the blood on the streets’ the voice emerges from the murk with an eeriness that makes the hairs on the back of your neck stand up. The three instrumental triptychs on Let The Dogs Erode sound like a cross between Alan Bishop guitar twang and one of Tom Waits weirder interludes. The title track on ‘Unlover’ is built on a sample taken from some lolloping machine upon which she plays a dainty guitar refrain and sings, moans, whispers unintelligible sweet nothings. Its quite unlike anything I’ve ever heard before. All of it is recorded in a murk that makes you wonder if the masters have been dipped in some special ‘make it all sound like its been recorded in a strange space’ formula. And lets not forget the instrumental ‘Industrial’, a four minute slice of muted roar and stretched leather strapping that wouldn’t look out of place on a Column One release. ‘Kamikaze Citizen’ contains vocal work comparable with the Cocteau Twins Liz Fraser and just for good measure theres some seagull squawks and a beautifully melodic fiddle to drowse along to. Its mind boggling stuff.

But I try not to get too carried away with myself. On repeated listens I wondered if I’d tricked myself into thinking that this was better than it was and sure enough some of the tracks on ‘Unlover’ drop below the quality bar. Some tracks contain a certain naiveté that lightly scars the better work but this is small beer. There are times when Henderson’s vocal delivery seems to teeter on the edge of Japanese opera too especially on the track ‘Soliel’ but I can forgive her these slights because so much of whats on here is of such inventive quality.

Its not everyday I get to come across a talent at such an early stage of development. I feel as if I’m at the beginning with Johanna egging her on to produce more quality work but even if she never releases another thing she’ll have left us with these enigmatic jewels

[Let The Dogs Erode contains a video work but such is the nature of hand painted CDR’s that I fear placing them in a PC that I rely daily on - its not available on the download either. A vital missing part for which I can only apologise].