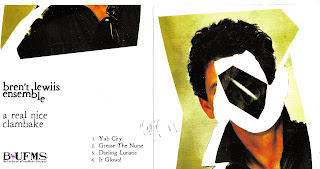 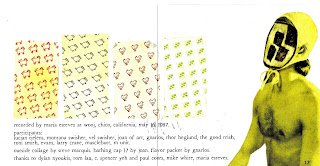 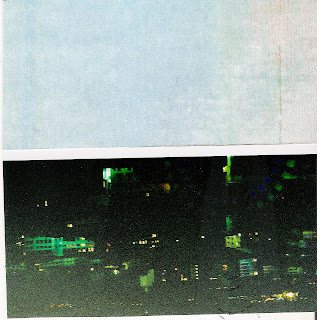 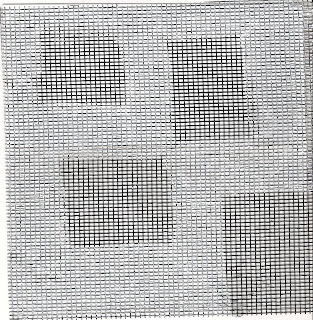 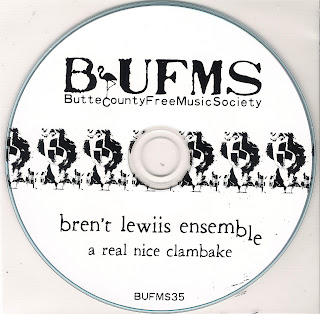 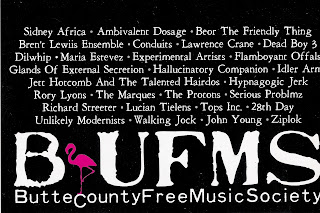 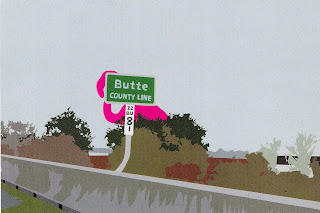 Some people will never understand John Cage’s philosophy or the fact that you can make music from cacti. For certain brains music has to have beginnings, middles and ends, it has to have a form that is recognisable as what is deemed to be music, it has to be something you can dance to, shag to, be the background to something being sold, it has to fill the dead air on car journeys, it has to fill the ears whilst walking, it has to lift one from the drudgery of the everyday with nothing more than a memorable beat or line, it has to have a face that feels comfortable and a form that is connectable. Nothing wrong with any of that of course but if only the imagination could be stretched a little further.

To your average Joe The Bren’t Lewiis Ensemble are a bunch of people fucking around in a room and nowhere near likely to fill in any of the criteria listed above. Get them to listen to one minute of any of ‘A Real Clambake’s’ fifty odd or so and they’d probably tell you that this definitely isn’t music. OK, there’s a bit of the Isley Brothers singing ‘Who’s That Lady?’ but its only the chorus and its on a loop and its very feint and the sound in the background is a droney whoo and theres a bit of backward tape in there too .. and probably something else I can’t quite put my finger on.

I felt the same way myself. When I first listened to A Real Clambake I thought it was a mess of ideas cast adrift with little or no thought given to its conception and I’m the kind of person who likes to think has a wide taste in a variety of musical genres. But then I listened further and deeper and it started to work on me. It was like re-reading a particularly difficult book and finding it wasn’t just a jumbled up mess of sentences and weird words.

It was to Seymour Glass that I gave those extra listens. He handed me a copy of Clambake whilst in Brighton before teaming up with fellow BLE-er Lucian for a Saturday night headlining slot. You don’t take a CD from the creator of Bananafish and dismiss it after a couple of throwaway listens, you take deep and careful lungfuls and dive in for endless hours. And then you look at the history of the Butte County Free Music Ensemble and find that they’re a loose collective of music freaks with LA Free Music Society connections who formed in the mid eighties and then went to ground for a while, for a long while actually. Eventually it all begins to make sense.

In Brighton the BLE were down to two; Seymour and Lucian but judging by the Clambake insert it could have been anything up to a dozen of them, all with ludicrous monikers: Musclebutt, Joan of Art, The Good Trish, Thor Heglund, Montana Swisher. As Headliners they crawled under a large sheet of black and white cloth and made sounds from who knows what. Party poppers were popped in brief glimpses of flesh [a Cage homage perhaps?] but apart from that it was a mystery as to what sounds came from what.

It put me in mind of Clambake though, an hour and four tracks worth where nothing sits still for long; the twang of guitar, a hell-fire Baptist ministers sermon, gurglings, snatches of dialogue [Have you seen those Japanese tampon fetishist magazines?’] the buzzing of amp sockets, a solitary ‘ah’, indistinguishable groans, cassette tape being fast forwarded, the slowly encroaching breaths of a dangerous wild animal, people going ‘eeeehhh’, specks of electric guitar, flutes playing randomly, a loop of someone saying ‘first’, bursts of organ, a cello, shrieks, oddball Tv samples, radio trawls and there you have a very brief glimpse of whats going on [If I was to type all the things I can hear in Clambake it would be a long scroll down to the bottom of this page]. All of these sounds have been culled, mixed, layered, and edited from hours and hours of worth of sounds made back in 1987.

This is rich loam and every spin feels different. Its an easy comment to make but I do feel as though I’m being transported during its course. Clambake gives you the feeling of being in someone else’s thoughts and ideas. Somehow I feel I know Seymour Glass better from listening to this. Because it is so obviously music and not the accompaniment to a commercial, it has no beginning, middle or end or face or easy to attach label. Pushing it further I could take these tracks apart with software and build new libraries of sound, enough to fill ten libraries. Deconstructed it could furnish many a jaded listener with new listening possibilities.

I only had brief, half drunk conversations with Seymour and Lucien [the curse of the middle night of a three night experimental festival] and I was even stupid enough to ask Seymour why he’d wound up Bananafish [‘no time’ being the obvious answer] but still, I got this CD out of it. I feel theres a whole world out there I knew very little of. LAFMS and Smegma were my beginning BUFMS will be my continuation.

I recommend total Immersion over the Christmas period. As a way of escaping the onslaught to come it could be easier than hiding down the cellar. You could try it with other kinds of music of course but I feel that BLE would be the perfect antidote to Slades’ ‘Merry Xmas Everybody’ and the Argos ads.