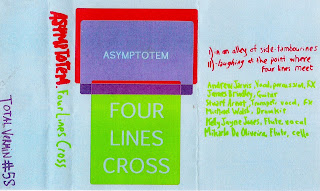 According to the Total Vermin blog Asymptotem were missing one vital ingredient the day these two tracks were recorded; Joincey. The peripatetic experimental drone pop maestro who finds his path crossing Manchester, Oxford and Stoke on Trent, whilst dabbling in more groups and recordings than seems humanly possible, was denied his place at the table due to the vagaries of the British rail network. Which is sad but having said that these two twenty minute pieces of achingly beautiful and whimsical folky oh so English drone are so damned perfect that we’ll just have to pretend he was there all along.

With a six piece line up containing two Sculptress members as well as TV boss Stuart Arnot I took an educated guess as to where these two tracks would be heading before insertion and playback but this still didn’t prepare me for what lay within. Both sides dwell in similar Sculptress territory; flutes, random drums hit with muffled mallets, the odd moaned vocal, kids toys, but here we have added beefed up and droning electric guitar, a drone that had me in mind of Matthew Bower playing from beneath a damp horse blanket. His droning guitar was there but made to stand at the back giving the other instruments space in which to be heard. But this is only on one side.

I don’t know which side it is which now but its the one that begins with a delightful twin flute duet before various of the above elements are added culminating in a crescendo of electric guitar wail that disappears into a trumpet squeak, amp buzz field of gorgeous emptiness. The other begins with blown tubes, Swannee whistles, sawn strings, softly hit drums, the piece held in suspension before the sound of Tuvan throat like moaning/singing and another flurry of drums. At times sparse Edgar Froese or maybe a more avant-garde Whicker Man soundtrack. However you want to compare it these are two tracks of outstanding beauty and creativity.

And it really is all so utterly delightful and for some reason so utterly English. Both tracks were recorded late on a summers day, maybe a rare warm one with ale in reach and bare arms on display. Maybe a picture of the Queen on the cover would have been more appropriate? Made me want to make a cup of tea, lay the floor with a map of England and look wondering if there were lay lines linking Stoke and Manchester.

Just listening to this and found your post when wondering whether anyone else had noticed how fab this is.