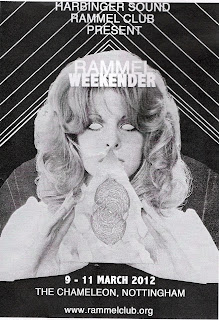 It’s 3.30am and Nyoukis is serenading the departing punters with a heartfelt rendition of what can only be a Laughing Len song. Its six inches from my left ear and the beer fumes and the delivery are pure drunk Sauchiehall Street not that Nyoukis is Glasgwegian. I made this mistake and got FUCKING WEST LOTHIAN MAAAAN in both ears as a spittled rebut. The beer fumes again. BLACKBURN, PURE SUBO COUNTRY. SUBO SINGING CAGE SONGS MAAAAN. THATS WHAT I’M FUCKING SAYING MAAAAN.

Its one of the highlights of the weekend. That and getting hit on the head by flying debris courtesy of The New Blockaders. TNB are Saturday nights surprise guests and for once the surprise is genuine. Maybe a warm up for the upcoming Berlin show? At once its visceral and edgy with sawing metal abuse, high pitched frequencies, the audience getting a little nervous maybe, TNB feeding off this with one masked provocateur hurling a wooden table into the throng where it flies tracer like onto my bald pate. Somehow I’m not too drunk or tired and manage to get a hand in the way and it drops harmlessly to the floor where it sits for two seconds before someone picks it up and hurls it back, along with a few beer cans spraying their emptying contents for good measure.

Friday kicked off with Makakarooma - a Filthy Turd side project. The Turdster stood on a table with a malevolent grin on his face that suggested more escaped borstal glue abuser than one of England’s finest gutter trash troubadours. One of his band played the bass wearing a KKK like hood, bare feet, hammering out a plod rhythm, one with an LP cover on his head hitting a side drum repeatedly, guitarist with lost look on face. The Turdster played single notes on a pocket rubber horn until he got fed up and got out a talking machine that worked off a pulled cord. A fine start indeed.

For once I get to see most acts as I’m sort of off the bottle and find this leads to enhanced music appreciation. Its only during Patrik Fitzgerald’s set of poignant songs that the legs begin to ache and the eyes drop. Kogumaza are a local band of guitar shimmers that are never going to my cup of Earl Grey but Durgan and Wall are. The PA manages to pick out subtle nuances in the sounds they create, high end squeaks, deep rumble with only the middle disappearing now and again. Wall’s lap top proves to have issues but once they’re underway its a taught ride. Friday’s headliner is Design A Wave which proves to be a a bloke with long hair and a beard stood behind a keyboard playing what I learn to be ‘Mutant Disco’. Coming from an era where blokes with long hair and beards were in the Allman Brothers Band I find this slightly disturbing. Couple this to lots of young people dancing about and I find that I may have stumbled into some kind of time warp where all manner of musical genres and stereotypes have been mixed up by the sound gods.

The one thing that put the biggest smile on my face was the fact that the three nights attracted an audience that covered all ages and both sexes. Having rubbed shoulders with beery blokes at all weekend noise fests and found myself in the midst of more men than women on more than one similar occasion it was heartening to see a higher ratio of the fairer sex. Watching slight females clearly grooving to Con-Dom was a revelation of sorts. Seeing young men with shampooed hair and full beards is also a new one. I should get out more. Get out of Cleckheaton more too.

I missed parts of Saturdays line up but it was hard to ignore the headliners Heatsick who played for what seemed like two hours. By now I’d disappeared back downstairs to the sanctuary of the bar driven out by the incessant thud thud thud interspersed with the odd cheer at every shift in tempo. It was quite a sight to watch Heatsick’s Warwick keep an audience on the hoof for such a length of time armed with nothing more than a John Shuttleworth keyboard.

Previously the Storm Bugs came out of retirement for their first gig  in over 30 years. They took their time to warm up [which is to be expected] but once they hit their straps their DIY songs, held together with [I think], analogue synth and various other odds and ends took me with them.

Saturday was dominated by the Sleaford Mods twin attack of council estate angst mixed with laptop bass beat meets John Cooper Clark type delivery. Lines and lyrics that are pure urban poetry. Sample lyric ‘ I don’t like Northern Soul …….. [pauses for effect, eyes crowd disdainfully] ….. it reminds me of Motown on the dole'.  And on another ‘ What have I got?…… piss pot’. They seem to be genuinely annoyed that people are enjoying them and laughing at them. ‘What are you fucking laughing at?’ says the jutted jawed one. ‘Jongleurs is up the fucking road if you wanna have a laugh’. If they ever venture further than Nottingham they’d murder the likes of media friendly Mike Skinner and The Streets. Whether they’re taking the piss or not remains to be seen.

Mentions in dispatches should be made to Bill Kouligas and Spoils & Relics. The rest I missed. Sorry.

If anything Sunday was the best night of the lot. As any weekend experimental/noise/whatever attendee will tell you though, the last night is the hardest. After two days and nights of too much drinking, too much crap food and too little sleep the enthusiasm levels are at an all time low and only the sight of a big name will pull the wearied festival goer from their stupor. But this is the new me and I can give detailed reports of the best night of the week.

An early afternoon start saw Sightings fumble until they found their feet with some synth vocals, SWLLWS [Swallows?] was three chord keyboard progression female vocal eeriness, These Feathers Have Plumes was drones made from wine glass rub, Nacht Und Nebel  were noise/drone/electro-acoustic maybe, Modulator ESP was a spacier Klaus Schulz in disguise [but if only he’d let things sit for a while instead of constantly altering every little dial and button] and then the big boys; John Wiese with a blistering set that had other noise artists making serious mental notes as to how they were going to sell their equipment on eBay when they got home, Dieter Müh with some seriously deep and stomach churning depth charges coupled to Maureen Long’s account of how she survived a Ripper attack and then to Con-Dom with a splenetic attack that defied the years and gave the younger members of the audience much to think about. Its been a while since I’ve seen Con-Dom in such violent form and I’d forgotten what an effect a Con-Dom performance can have on an audience; high pitched, ultra shrill sonic attack lined with bare chested, wild eyed vehemence, a shoving and a pushing into the punters and them shoving back. Quite stunning. Phillip Julian’s Cheapmachines set saw him sit blankly in front of his equipment as he unfolded another quality noise set. The disinterested stare at odds with what he was producing. My noise ears have been reopened and I’m finding my appetite for it once more.

And then came Bong whose take on the eternal doom chord you could experience from the bar [me] or in front of the hefty PA system [most everyone else]. I’ve never taken to the Earth/Sunn O))) axis of sounds and I don’t suppose I ever will but with such a varied bill you’re unlikely to like everything and so it proved.

Untold thanks go to all involved especially the Undermeister and Mrs A who put me up for the weekend the former asking me to DJ thus giving me the opportunity to drive everyone batshit with my collection of charity shop raids. Put my name down for next year.


[Approximate running order as I remember it]