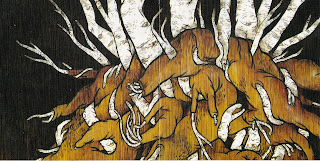 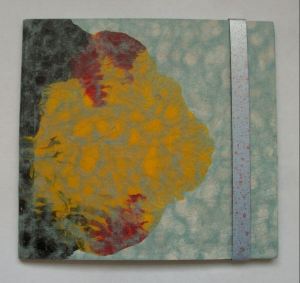 Having succumbed to a variation of the dreaded Turkish Goat Flu I’ve been away from the keys of late. Three weeks of fluctuating body temperatures coupled to a cough that had me rattling to the core, both hands clasped firmly about the upper thighs in support, left me in no mood for tackling the review pile. The review pile that has been building of late. The recent trip to Northumberland, where we spent mornings filling our lungs with fresh air in a bid to rid me of said malaise, was as usual a music free trip. Apart from the odd bit of Radio 3 or 4 in the background, music there was none, walking there was plenty.

Its been the official stance for quite some time now. Having spent 12 nights in a hotel in the middle of nowhere India listening to nothing but Putrefier and Ashtray Navigations for days on end I can honestly say that it just doesn't suit the travelers mood, not this one at any rate. Trying to cogitate on the inner goings on of the minds of certain noise and drone makers whilst being served tea by a turbaned waiter never really worked for me so I just gave it up as a bad job and came to realise that unless I was at home, in the comfort of my own Poang, keyboard, pen and paper at the ready, there just wasn’t any point.

Its not until I return home that I realise how much I do miss the review pile though.We got back yesterday and once the chores were out of the way I spent the next eight hours lost in a world of drone and noise. A world where 3” CDRs come with exhortations to distribute freely, a world where Broken Flag cassettes get the vinyl treatment, a world where people do extraordinary things with Nick Cave songs, a world where Gruenrekorder send me a release containing a meditative work composed on a mountain top sanctuary which had the entirely predictable effect of sending me into a deep and restful afternoon kip.

I’d had the 3” CDR Midwich/Skull Mask for a while before Turkish Goat Flu II hit but never got round to inflicting words upon it. When I returned there was another Midwich release lying on the doormat. I felt I could kill two birds with one stone and besides, I’m a Midwich fan and words tend to come easier when the work on offer is something I'm familiar with.

And then I played Running Repairs which is probably the most remarkable Midwich release to date. A tiny two minute segment of buried voices and howling wind is sandwiched between a slowly evolving granular melody and a single oscillating note both of which run to over twenty minutes.

Where are the dainty pulses and head bobbing melodies? Drifting pastel coloured bubbles there was none. Delicate, floating flowers of tranquility had disappeared to be replaced with harsh and grating drones the likes of which appear to be new pathways for Midwich to explore. Familiarity there was none.

The hardest track to get through on Running Repairs is Bosky. Bosky is 25 minutes of a note taken for a walk. A primitive industrial buzz that had me wondering if I’d fallen asleep and woken up instead to the Kleistwhar LP’s. I went back and back again and still couldn’t make my mind up as to whether this was stimulating or annoying. Its certainly hypnotic and it is drone but of the kind that only people on Largactil would appreciate.

The opener New Territories is equally as hypnotic but much easier on the ear. A controlled amount of background fuzz over which a rapid and urgent industrial rhythm slowly mutates along its length until it dies out in a helicopter lift off. Maybe the clue is in the title?

The two shorter Midwich tracks on the Skull Mask split lie in similar New Territories territory all of which leaves me wondering whether Midwich has been digging out his Broken Flag cassettes or whether he just fancied a meatier work out.

Skull Mask sound like a gang of John Fahey’s fighting over six out of tune Bazoukis in a Greek taverna whilst Midwich Rob drones in the background. This is the work of Miguel Pérez who I think hails from Mexico and is now part of the Rob Hayler/Midwich/Radio Free Midwich ‘Deranged Nodders Alliance’. You can join too but you have to be seen to be actively involved. Passing participation is OK I assume but getting your hand dirty is much more fun.

But this is what happens when you venture into the world of the ‘no audience underground’. The 3” CDR encourages duplication, distribution, expression and review. Each unit is unique. Something to be encouraged in a world where ‘stick it on Soundcloud and hope for the best’ is fast becoming the norm. The Striate Cortex packaging is a thing of hand made joy with hand splodged thick card outer and arty inner, printed CDR, OBI strip and four measly quid to boot. Most of this is available for download I assume but backing it up with hand made-ness makes these objects of desire and for someone whose been out of the loop for a while, items to be treasured and mulled over.

I'll have you know that 'bosky' has established itself as a firm favourite during cardio workouts. It's hi-energy drone, no doubt...