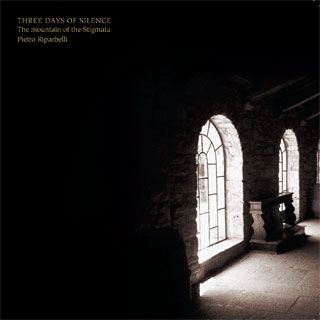 
Three Days of Silence is described by its composer as being ‘a phenomenological experience’. ‘Phenomenological’ meaning: ‘the detailed description of conscious experience, without recourse to explanation, metaphysical assumptions, and traditional philosophical questions’.

Pietro Ripabelli recorded his phenomenological experiences at the Sanctuary of La Verna, a remote church in Tuscany built on the site where St Francis of Assisi was reputed to have received the stigmata. As you would imagine Ripabelli’s field recordings are exquisitely austere and relay the contemplative nature of the building and its surroundings with a deft touch. But as well as the vespers and the church organ we get more natural sounds such as bird song, bees, the scrubbing of floors [at least thats what it sounded like to me], heavy doors being opened and closed, the turning of ancient keys, a steel bucket being dropped to the floor, hand bells being rung, the recordings are so melancholic in parts that it took me a while to get through it in one go without nodding off, a problem [of the good kind] I’ve had with previous Gruenrekorder releases.

Ripabelli divides the work up into three days with each day having an interlude; ‘Stillness’, Duration’ and ‘Aletheia’ [the spirit of truth]. The main triptych range from pure field recordings to compositions made from sound sources and I suspect a mixture of the two [the sleevenotes describe the third day as a ‘short diary of the experience’].  Whatever Ripabelli has done with these sound sources the results are pretty stunning but it was only after I’d downloaded the original sound sources [via Gruenrekorder] that I got a better understanding of what the final work encapsulates. I was mistaking those throbbing drones for Pirabelli’s work when these are in fact of the Basilica itself - on first listens a major stumbling block when I was of the mind that I would have much preferred these recordings to be have been left bare, me being in the less is more camp. But after much contemplation of my own I found myself warming to this release. The interludes are finely crafted short pieces with ‘Aletheia’ sounding like a lo-fi TNB gig played in a wind tunnel, all scraping floors, shuffling and desolation. ‘Duration’ is a small drone, squeaky doors met with low end farts, flutters and glitches found only at electro-acoustic gigs. ‘Stillness’ is sonar bleeps, sweeps and arctic bleakness. The main parts of the composition provide even further fulfillment: ‘First Day’ where the friar’s vespers are accompanied by that stunning low Basilica hertz hum as it frazzles along besides an increasingly powerful organ run. ‘Second Day’ begins with a drone this time accompanied with dripping water, birds, bells, the drone fades into the background leaving ghostly vespers and eerie floating organ keys. ‘Third Day’ sounds like the most processed of the three and is perhaps the weakest with its pulsing and rapidly vibrating electronic drone masking much of what goes on beneath it.


It goes without saying that you don’t have to be religious to enjoy music of a religious bent, not that is in any way a religious release. The Estonian composer Arvo Pärt is probably the only composer alive whose sacred music is enough to move me emotionally whilst Richard Dawkins, now the most famous atheist in England, chose Bach’s ‘St Matthew’s Passion’ as one of his choice cuts on Desert Island Discs. I myself have sat in Barcelona Cathedral whilst Mass has been performed and enjoyed the purity of the ceremony whilst more recently I found myself listening to an organist run through his repertoire as I sat outside his North Yorkshire church making the most of the weak spring sunshine. Ripabelli’s compositions might not be potent enough to get me join forces with the Franciscan’s of La Verna but whilst listening to 'Three Days of Silence' I felt that I had at least, been with them in spirit.