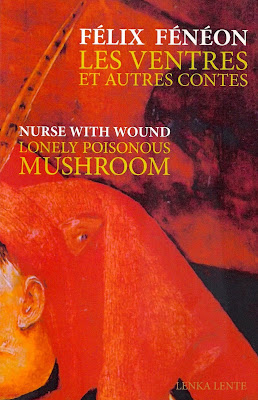 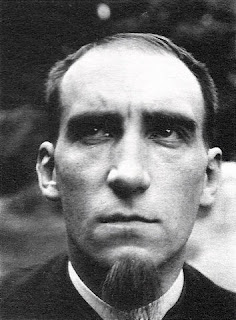 
Another Lenka Lente book/CD combo where you get to discover that ‘Les Ventres et Autre Contes’ translates as ‘The Bellies and Other Stories’ and that Félix Fénéon was an Italian anarchist, art critic and literary stylist with a tremendous goatee beard who didn’t like the portrait that Paul Signac painted of him because he painted it in profile, not face on as requested, but he hung it on his wall anyway.

Pity the poor English monoglot though for as ever with Lenka Lente the text is all in French but look on the bright side, at least you get to know more about obscure figures in the world of European art. Five short stories here that first saw the light of day in various French literary magazines circa the late 19th century. I wish my French were better than it is. For English speakers wishing to explore Fénéon's work there's a book of his still in print called ‘Novels in Three Lines’. A collection of hundreds of his deadpan observations as published in various French newspapers of the day. It gives us a taste of Fénéon's work and his no doubt languid sense of humour:

Harold Bauer and Casals will give a concert today in San Sebastian. Besides that, they may fight a duel.

Seventy-year-old beggar Verniot, of Clichy, died of hunger. His pallet disgorged 2,000 francs. But no one should make generalizations.


There's more to Fénéon than this tho and I've included the link to his wiki page should you wish to learn more.


Previous Lenka Lente editions have seen Nurse With Wound coupled with outsider artist Adolf Wölfi, art critic and poet André Salmon and the author Charles-Louis Philippe. They should do one with Boris Vian. I once read Boris Vian’s, ‘I Shall Spit on their Graves, because I thought Vian, who also played trumpet and was involved in the 1950’s Paris jazz scene was Neil Campbell’s doppleganger and that there might be some kind of link between the jazz scene in Paris in the 1950’s and the noise scene in West Yorkshire in the mid 1990’s but there wasn’t.

The Nurse With Wound track is taken from 1989 comp ‘Automating Vol. II’ and is a nine minute compendium of quick edits that are barely recognisable bagpipes, coughs and dramatic church organ chord clusters that rear out of your speakers like lions trying to bite your head off.

I wonder what Fénéon would have thought of it?