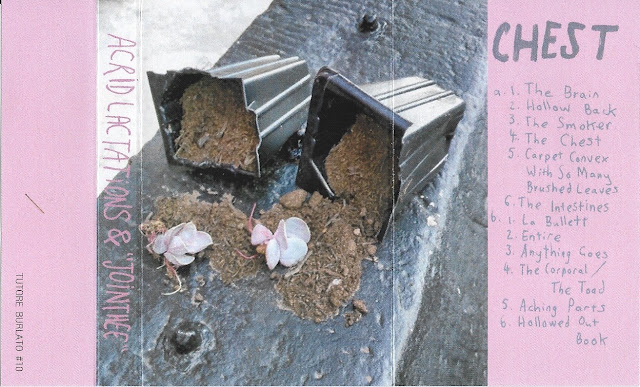 
I’ve been reading this new book by Stephen Graham called ‘Sounds of the Underground’ and in it I came across the term ‘esemplastic laminal improv’ which meant absolutely nothing to me. Then I wondered if the term could be used to describe what Acrid Lactations & ‘Jointhee’ create because whatever it is they do it defies categorisation and I kind of like the sound of ‘esemplastic laminal improv’ even if I don’t know what it means.

For the uninitiated Joincey [or in this instance ‘Jointhee’] is the peripatetic originator of a multitude of solo projects and the member of more bands that if printed here, would make this paragraph seriously unmanageable. I saw him on Saturday at the Tor Fest, clean shaven for once which kind of threw me and asking where the chips had come from. His singing voice has a flat vaguely northern property to it which can at times ascend into a highly recognisable wavering warble. That's when he is singing because the way he does sing is really talking. On one of the tracks here he starts off by singing ‘Imagine Morrissey singing this’ and I do but not for long because I’d much rather have Joincey singing it.

Acrid Lactations are Stuart Arnot and Susan Fitzpatrick who when this was recorded lived in Glasgow but have seen sense and have now moved to York [I saw Stuart on Saturday too but only fleetingly and feel compelled to use this opportunity to apologise to him here for not tracking him down and asking him how he was] and who one day had Joincey turn up whereupon they made some tea and recorded some songs. Twelve of them. Each one having a different resonance each of them giving me that esemplastic laminal improv feel.

Whilst listening I wrote: the Stokie Shaman, gut ache improv, Sun Ra skronk, stories told by someone pretending to be a witch, silence, taut Hitchcock-ian soundtracks, spoken word question and answer sessions, running water, people talking in deliberately affected voices as puppies whine in the background, sax honk and Moroccan snake charmer capstan abuse. The songs are all written by Joincey and appear to be either stream of consciousness observations or random thoughts. Whether these lyrics were then improvised upon or are actual compositions is where esemplastic laminal improv comes in for in truth I haven’t got a clue. Vocal duties aren’t all Joincey’s domain either with Arnot’s Scottish brogue coming through on a foreboding track which sounds like he’s recounting a ghost story in a scary voice to a room full of terrified infants as a wheezing two chord keyboard refrain huffs in the background. Strings are scratched as Fitzpatrick [maybe or maybe even Joincey] goes all falsetto. One track lasts for about three seconds.

It matters not what you call it though. These twelve songs are all highly singular and timeless creations that emerged from a room in Glasgow, where once upon a time someone knocked on a door and tea was made and music was made. All making for some rather extraordinary and solidly unclassifiable music.