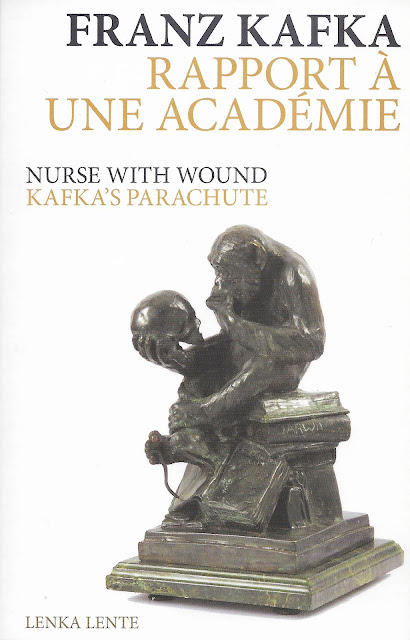 
A few weeks ago I came across Satoshi Takeishi and his compositions for a soundtrack to a film version of Kafka’s extraordinary novel 'The Trial'. Its a pretty good soundtrack too in a low oscillating synthwaves kind of way. I dare say it’ll work well with the film and in some respects it wouldn’t go amiss as music to listen to whilst reading the book. I read The Trial while on holiday in Goa years ago when I should have been reading it sat in a Prague cafe drinking absinthe. Such is the power of the book I soon forgot that it was 35C with 95% humidity and I was in that dark, claustrophobic place that Kafka conjures like no other. The Trial is a remarkable novel and Kafka a remarkable writer, all this made all the more remarkable for the fact that he published next to nothing during his lifetime and left in his will demands that all his work be destroyed.

Then last week I watched The Insurance Man. Alan Bennett’s play about Kafka’s position in the seemingly surreal and incomprehensible insurance company for which he worked and the companies determination not to pay out at any cost. Daniel Day-Lewis played Kafka and Bernard Wrigley played a workman. The one and only time those two names will ever appear on the screen together. His work will live on forever. But probably not Wrigley's.

Rapport À Une Académie arrives with a PDF of an English translation courtesy of Lenka Lente as the text here is once again in French. Its the story of an ape who escapes his captors by adopting human traits and becomes so successful that it makes a living in music halls. An analogy for the assimilation of Jews in to society or something deeper perhaps? Typical Kafka.

Not that all his books are as easy to read as The Trial. Last year I picked up The Castle and after a hundred pages I felt as if I’d been sent into a dark maze from which there was no escape. Which is exactly what Kafka would have wanted. Once my stamina is back to where I want it I’m going to give it another crack.

On the CD we have an exclusive track by Nurse with Wound. Here as a six piece and a line up that includes Stapleton, Potter, Liles, Waldron, Quentin Rollet and on ‘words’ the enigmatic It Could Be Worse. Those words being Lewis Carroll Jabberwoccky-esque nonsense words as spoken by an overenthusiastic spell-casting Catweazle. Its such a good track it had me disappearing down the Nurse worm hole for a week reliving all those classic albums and shaking your head in wonderment as to just how good Nurse With Wound can be. Eventually It Could Be Worse’s words end up in a loop as bats fly and owls screech and goblins groan before it all goes surreal New Orleans trad band gone wrong with messy tape and toy squeaks and duck calls and shaved guitar strings.

I did eventually make it to Prague and of course, the Franz Kafka Museum. My memories of it are of a room full of Bakelite telephones that rang randomly and a bizarre water fountain consisting of two male figures, face on in a pool, swiveling at the hips, streams of water issuing forth from their members and landing at their feet. What Kafka would make of such things we can only guess at.