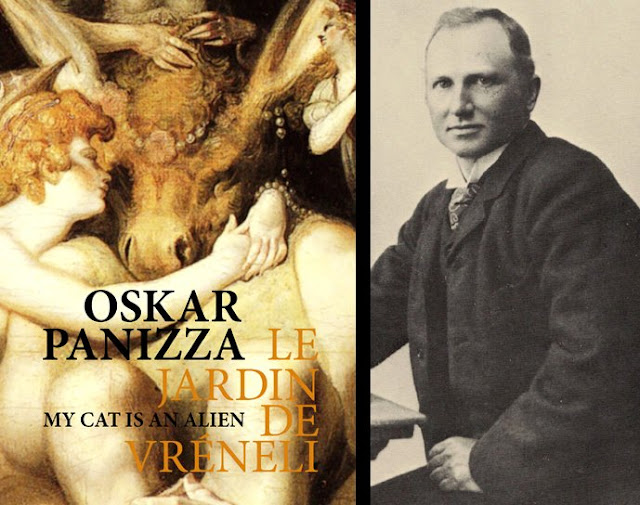 Oskar Panizza was an avant-garde German author best known for his work ‘Das Liebenskonzil’ [The Love Council]. Published in 1894 its blasphemous contents earned Panizza twelve months in jail. The book is set in 1495 and documents an outbreak of syphilis, seen here as God’s vengeance on sexually hyperactive creatures. Especially Pope Alexander VI. God is portrayed as a senile fool, Christ dimwitted, Mary a slattern. Thats why he ended up in jail. I wouldn’t mind reading it myself but it would appear that while Panizza has been translated in to French he’s yet to be translated in to English.

Le Jardin De Vréneli is an essay maybe or an hallucinatory short story or homage to Richard Wagner. I’m not certain. I read the occasional sentence feeling the avant-garde coursing through the tips of my fingers whereupon I come across this line;

Panizza’s life story is an interesting one; as well as being incarcerated for blasphemy for ‘Das Liebenskonzil’ [93 counts] he was charged with crimes against the state for the 97 poems he wrote about the German Emperor Wilhelm II and had his trust fund taken from him for good measure. Having been declared insane the charges against him were dropped. Later in life he became paranoiac, suffered from auditory hallucinations, spent time in mental asylums and the last sixteen years of his life in on the outskirts of Bayreuth in a health clinic. Author, poet, publisher of magazines and thanks to Lenka Lente someone who I am now at least aware of.

The three inch CD contains music from the Opalio brothers from whom I haven’t heard in a very long time. I have an LP of theirs that came out on Starlight Furniture Co in 2000 and which probably hasn’t been played since then. I had no idea they were still going. They obviously are. This twenty minutes worth of their take on improv, or as they term it ‘spontaneous composition’ is remarkably similar in style and tempo to Throbbing Gristle’s ‘Weeping’. With its echoing guitar treatments and ghostly wailings its an ethereal and haunting listen. Whether Panizza would approved we can only summise.

There’s something about having such a slim volume in your grasp that appeals to me so [all the Lenka Lente books I’ve had measure 10cm x 15.5cm]. A book to slip in to the pocket to help pass on the thirty minute commute or the slack time in a doctors waiting room. Put your phone away for once. Delightful to have and to hold.