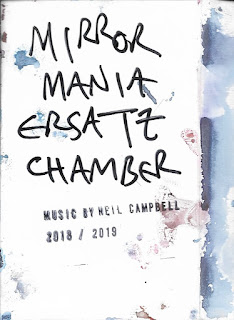 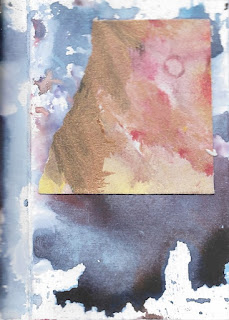 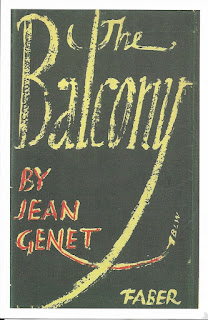 I do admire a person who dubs their tapes in real time before sticking them in a hand daubed sleeve, sending them out snail mail with a greeting written upon the reverse of a very nice postcard. Mine was Genet’s cover of his Faber book The Balcony. 1950’s. It looks gorge dahlinks in that ‘we’re not trying that hard’ 1950’s kind of way. But this is 2019 kiddywinks. Put your iPhones down for a minute and take note. All that Whatszappening, Instagargling and Faceflogging is only going to get you so far. And while Zuckerberg makes billions from selling your data to all manner of dodgy, money obsessed scum you could be doing something like this. Making something. And not just noises made with an app on your phone. This is real. An actual thing. And not available on bandcamp. Yet. Maybe never.

Repellent Music did make it on to Bandcamp. This cassette came wrapped in a sheet of paper and was from the Campbell School of Noise. It sounded a bit like a stretched out electronic growl, someone making a low ‘ahh’ sound and treating it electronically for an hour. It morphs of course. All Campbell music morphs. There may be the faintest trace of where you began at its end but during that time you’ve visited at least three musical continents, ten musical genres, two different guitars, several effects, ten noise boxes, a KAOS pad rewired to sound like a melting star, three magpies and the pounding beta sound of several crates of dance records. Maybe in another past life he was just a frustrated bell caster?

I write this the day the tape came through the door [actually now yesterday]. Its the kind I like the best; a smooth white shell with Mirror Man written on one side and Ersatz Chamber on the other but hang on, one side is blank. Has Campbell forgotten to dub a side or did he just write the title across both sides of the cassette because he didn’t have a magic marker with a point fine enough to fit it all on one? Ah well. Let it sit there. I like it as it is.

To be honest with you I owe Campbell a review. I’ve probably not written one for over a year while he very kindly sends me things without pressuring for a review. I’ll swap this for the numerous emails I get from people who never read these pages and a week later follow up with a ‘have you had to chance to listen to my Greatest Thing Ever’. You lot can all go and shite.

Mirror Mania Ersatz Chamber Jean Genet’s The Balcony Could Be On Two Sides Of A Cassette But I’m More Than Happy With One visits several continents and the insides of the Fripp/Wilcox household where Toyah bangs away on a toy xylophone as Robert winds up the acoustic guitar for some serious head down stunted riff work. Yes it morphs. Of course it morphs. And layers. And layers. And layers. I’ll rewind it once more and tell you all about it because its new and its exciting. Yes. Exciting. While it was rewinding I started listening to Repellent Music [via Bandcamp] and got caught up in that again The whole hours worth. I should visit this page more often. There’s not much more you need really. What I really need is a cassette player that plugs in because I’m burning though batteries what with this tape only being on one side and me not having the patience to rewind it with a pencil [someone please explain this to younger readers who only have smartphones to access music]. I’m in an Alpine meadow and all the cows have bovine spongieform. Hang on. This is different. Have I only reversed halfway and pressed play. Have I got my sides mixed up? You cant see in to the cassette. Sodding white cassette shells. Now there’s some carnival music. A Parisian Merry Go Round. Now the pace is considerably slower. I’ve been sucked in to the Campbell space-time continuum where your senses are not what they were when you first entered. My mind has been taken over by Campbell. An even slower pace now, an African sounding stringed instrument gently, hypnotically plucked to an effervescent background of electronic fireworks. It does have two sides. Sodding tapes. What was I doing? Whats happened? Can I go now? I think there’s a dog barking somewhere. This is blissful. I think I’m tripping. Up.