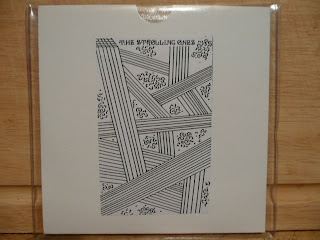 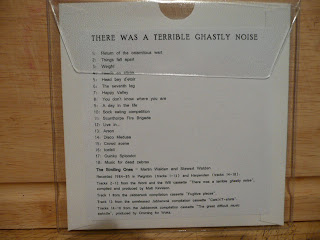 The Strolling Ones - There Was A Terrible Ghastly Noise
Music Mundane. CDR

The Strolling Ones are Martin Walden and Stewart Walden who one day went to Richard Youngs house and inadvertently formed the A Band. Who never learnt to play their instruments but who became an important group due to the fact that they became a catalyst for many of todays UK experimenters. Including Neil Campbell whose Music Mundane imprint this appears on.
There Was A Terrible Ghastly Noise is a collection of early tape works [some of it unreleased] from the early to mid 80’s which on the whole could be described as just plain daft but if you’re in the mood for this kind of thing could also be described an English Dada Frankenstiens monster made from the bodies of Viv Stanshall, Monty Python and Spike Milligan and maybe, just maybe Throbbing Gristle
One track sounds like a Goons outtake [The Seventh Leg Society] replete with silly voices, ‘Arson’ is a Dennis Duck type stuck groove with the word ‘arson’ repeated for its 62 second duration, the last track ‘Music For Dead Zebras’ is 42 seconds of someone trying to screw in a light bulb before it cuts with the words ‘oh well, thats enough’. ‘Live in …’ at twelve minutes is by far the longest outing, over a background of jabbed keys, air horns and unidentified noises one of the Waldens ‘sings’ and I use the term in its widest sense, absolute nonsense in a heavily reverbed voice before dipping into White Christmas, for some reason I kept being reminded of Genesis P Orridge in one of his early TG outings.
‘Sock Eating Competition’ is a hysterical pair of Walden’s off their tits on something stronger than tea talking about a sock eating competition. ‘Crowd Scene’ is a straight recording of a group conversation in which several people are laughing and talking and laughing and talking of Dada and Mongolian armchairs. All at the same time. And on it goes. For 18 tracks and 50 lunatic minutes.

There’s no point in trying to make any sense of these 50 minutes. They are what they are - two people fucking about with a tape recorder [and a few tracks recorded with a Casio keyboard at Richard Youngs house] but having a great time with it. But what fine loam this is. Whether its worthy of repeated plays is a moot point. It is what it is. It has served its purpose.

Anyone reading this who has no idea what it was like to grow up in England in the 70’s and have to stay up until the middle of Sunday night to watch Monty Python or argue with their parents so as to watch Spike Milligan on one of his ‘Q” outings, [on one of the three channels available then] could do no better than listen to this. It could open up lots of doors, it could give you some kind of insight into the eccentric British psyche or it could just plain baffle you.

The last time I saw Stewart Walden he was throwing people around at a Smell & Quim gig. The time before that was at a gig in London where he’d turned up in a silver lamé suit carrying an ironing board. Not somebody you’d meet every day. What happened to his brother Martin Walden I have no idea.

Hey, Idwal Fisher! I think i have one of your zines on the floor somewhere. I'm still around, occasionally doing stupid noises, still. There's some stuff on last.fm. Thanks for this review, being in TSO was fun and reboot attempts are ongoing. I remember the making of all these tracks except "Scunthorpe Fire Brigade" which is a complete blank. Stewart is the, erm, vocalist on the long live track. The four people in Crowd scene were us two, Richard Y and Andrew Trussler who was in Omming For Woks with Richard at the time. I really have to namecheck the late, great Matt Kinnison who mixed some of this... stuff. Nothing stronger than tea was used in the making of any of these tracks. Well, maybe some chocolate cake.