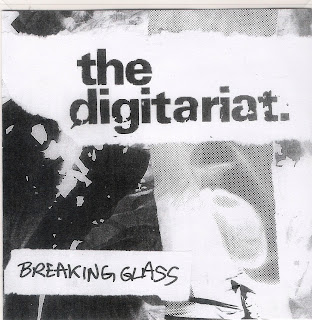 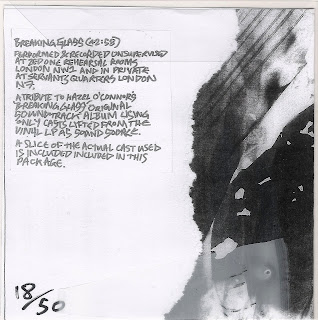 I have to admit to a slight penchant for vinyl abuse. Those Youtube clips of Christian Marclay throwing vinyl hither and thither whilst keeping five turntables going never fails to amuse.  AMK, Dennis Duck, even TNB material showing smashed records adorned with rusty screws lifts me from my cups. There’s something in the act of destroying a record to make another record which I find immensely appealing.

One person I thought would never turn to vinyl abuse is Paul D Knowles. His Digitariat outfit is more generally known for noise of the electronic variety and its here I have to declare an interest. For me and Knowles have a history of sorts. I saw his first ever live outing where [then working under the Dachise moniker] he supported Smell & Quim and Con-Dom at the 1 in 12 Club Bradford. We used to communicate via the post dhalinks, he used to live not far from here in posh Harrogate and his Dachise single for a nascent Tochnit Aleph label was a release that pulled me back from a noise abyss. At a time in my life when I felt like giving up on noise, this particular single [Sugar Path], dragged me back in. Having ditched Harrogate and Dachise for Berlin he now finds himself ferreting his time away in London with The Digitariat.

Breaking Glass is a departure from all his previous work, the bits of it I’ve heard at any rate. For it Knowles has created a cast of Hazel O’Conners Breaking Glass soundtrack LP and used it to create a 42 minute piece of loops and general chaos. There’s a sliver of the cast included with every copy [thereby instantly lifting this release from something mundane into something far more interesting - CDR labels take note] which gives you some idea of how fragile the cast must have been when it was in one piece - think lightweight anorexic flexi disc.

The sounds he creates with it are similar in playback to AMK in particular, things kick off in a fairly rambunctious fashion before settling in to a series of locked grooves, glitches and snatches of garbled vocal, some of them seeming to go in reverse which has me wondering if this record was so thin it could have been played on both sides. It does have its moments but at 42 minutes I found my patience being seriously tested. Its not all noise though, melodic moments appear fitfully but for the most part this is fairly harsh in a ‘I can’t take it no more’ fashion.

I guess that with hitting the 42 minute mark Knowles is angling for a vinyl version somewhere down the line and I dare say there’d be takers for it. Potential buyers will have to have plenty of patience though for this does grate at times. I still got something out of it though, even if it was for short periods. The last five minutes are probably the best but by then I fear that even the most ardent of listeners will have moved on, no doubt digging out that sterling AMK flexi cut-up Pinch-A-Loaf release.

I emailed Paul asking him how he actually made the glue record. Here is response:


'A few years ago I turned the TV on late on a Sunday night and there was a documentary on about Toyah. It was a faith programme and I couldn’t really understand what her religious faith was, something “new age” and seemingly unspecific. I wasn’t interested in that subject, but the old music and videos were great. The 80s revival stuff seemed to have completely missed out on the Toyah treasure trove, perhaps it was just beyond the pale. This week I went to some second hand record shops and bought most of the Toyah LPs for 10p each and for the same price I got a copy of Hazel O’Connors ‘Breaking Glass’.

The film ’Breaking Glass’ is hard to find on DVD at a fair price, my memories of the film are from when I was in my pre-teens. It used to be on Channel 4 late at night between Xmas and New Year holidays. The music, which was supposed to be punk or post-punk, certainly had a naff stage-musical feel to it. Very overdramatic.

I had first happened upon the process of making a cast of a vinyl record many years ago. I was experimenting with old records after reading the liner notes of a C C Nova CD which described use of burning, scratching, use of masking tape and glue on a record before playback. With the glue, I found that glue stuck to the vinyl of a record lifted easily once dried. Lifting the dried glue from the record, you can see how fine it picks up the details of the grooves.

What would be the inverse of the grooves lifted inside the cast? The idea that the cast would be the exact opposite of the grooves of the vinyl doesn’t exactly follow, rather than sounding like something completely opposite and other it actually sounds like a ghostly version of the original. Of course, the spiral runs from inside to out which makes it a backwards record, but inverted grooves should be more complex that that, and I’m sure there is something else other than a reverse. The glue also makes bubbles and their disturbances help the needle to jump around to a random point without any manual guidance.'
Posted by Idwal Fisher at 8:53 pm