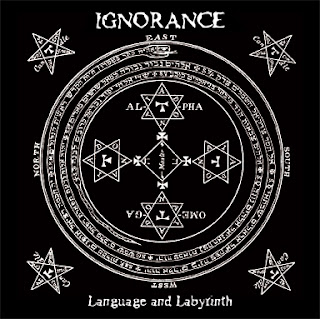 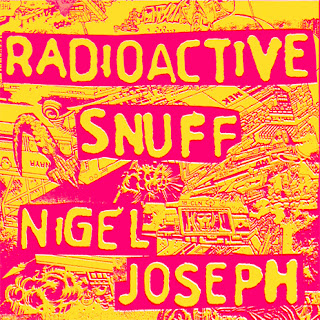 Like most people who pass through the Ceramic Hobs Nigel Joseph has had his runs ins with the Psychiatric wing of the National Health Service. I once interviewed him at the fag end of a particularly drunken day in Blackpool and his recollections of some of the drugs he’d been proscribed made heroin look like sherbert dip. As is usually the case though, he seemed far from mad. Maybe it was the beer. I’ve been a bit of a fan of Mr Joseph since he began sending me his home made noise releases back in the 90’s. These shoddy CDR affairs usually contained basic rock tracks in which he distorted everything to maximalist  buggery. There was something in the immediacy of this approach which appealed to me at the time, noise for making a noise sake pure and simple. He once threatened to release the ultimate noise release - a hundred noise cassettes sewn into a dead dog, released for one minute, on one day and then deleted forever [ … about that mad bit again]. There’s also been the Nervous Breakdown zine,a chaotic mess of newspaper cuttings and genital drawings and involvement in other west coast acts, besides the Ceramic Hobs theres the mysterious power electronics influenced Ambulance Chasers and the ridiculously named Heffalump Trap.

After playing Radioactive Snuff a couple of times I can only begin to wonder if all those mind numbing drugs have finally done the trick. Forget noise, this is nothing but an hours worth of head nodding chill out muzak for the heavily sedated. Its not that away from what Astral Social Club achieve but whereas ASC will use a loop and a 4/4 thump as the first stages of a joyous trip to ear nirvana Joseph never pulls out of first gear.  ‘Chlorpromazine Dreams’ [the first track] tells you all you need to know, Chlorpromazine is Largactyl by another name, a powerful antipsychotic. Thump, thump, thump  ‘Vaginal Snot’, twenty minutes worth of thump guitar neck wringing. Thump, thump, thump. ‘Born Dead Too’. Thump, thump,thump. And so it goes. I reckon that you’d have to be on the same drugs as Mr Joseph to get even the tiniest bit of anything out this.

Its a problem I had with both of the comps too. I don’t know what it is they’re putting in the water in Blackpool but through MDR there seems to be an outlet for hours worth of cheap chip set cod reggae spliff muzak made by people with names like Mindrocker, Lava Surf and Nipper. The two spoken word outings by Miles Hadfield and the Must Die Sound System appeal most because they’re quite obviously not cod reggae dub step chip set head bobbing drug music. Both are wry and despondent observations on decaying suburbia written in poetic language and delivered in a flat voice [with a bit of programmed beat in the background it has to be said]. Marvelous. Elsewhere Variable Phantom provide some found sound static but spoil it by putting what sounds like moaning vocals over it and Bad Suburban Nightmare’s 16 minute magnum opus sounds like one of Ashtray Navigations more raga like outings. Think Derek Bailey playing swamp music. Apart from that its all pretty depressing. A bit like Blackpool.

Which leaves Ignorance, who from their cover art would lead you to believe they’re a bunch of dark metallers getting their hands mucky in the devils work but who on first listen display nothing more than prosaic noise flutter, amp buzz and what I like to call Norman Collier noise. Thats the kind of noise you hear when the wire to one of your speakers has become frayed and the signal drops in and out. Amusing for the first minute or so but after five you want to kill somebody.

Must Die Records are a not for profit label whose motto is ‘love music, not money’. Entirely honorable sentiments and if you go to their website you can listen to most of this stuff for free. Its seems churlish then to criticise a label with its heart in the right place but when you don’t like the music they put out what can one do eh? I dare say that there’s an audience for this kind of thing but not at number 17.