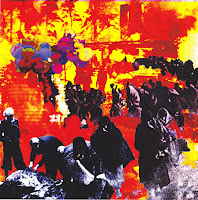 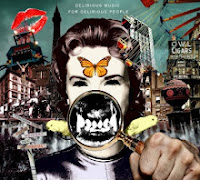 Delirious Music For Delirious People
No Part Of It. CDR

There are some genres of music that I feel I will never come to terms with; trad jazz, scraping atonal modern classical, hip-hop, the boom-boom-boom stuff that you can hear coming out of teenagers cars half a mile away, bland pop and the kind of opera that seems to consist of two fat people bellowing at each other for five hours. Today I’ll add whatever it is that Arvo Zylo has created. I have no idea what you would call it though but this doesn’t stop me guessing: Sequencer Noise? Genre Collision? Overworked Sampler Dirge? ADHD Soundtrack?

I imagine Mr. Zylo as some kind of modern Wizard of Oz, the man behind the curtain spinning wheels, pulling levers, shouting orders to a massed orchestra of sequencer operators urging them to spit out their drum and bass samples, their hard beat samples, their fairground ride samples, their chipset computer game music samples. I’m looking at my notes for inspiration because, because, I just cant bring myself to play this again. Twice was more than enough. The first time to acclimatise myself to it and the second just to make sure that what I heard the first time wasn’t a mistake.

The saddest part of this story is that ‘333’ took Arvo six years to put together. One can only assume that this wasn’t six years continuos work but the odd hour on in front of the PC in-between propping a bar up somehwere. Whatever kind of genre you would like to chuck this in with you can tell from the first listen that its overworked. overwrought and overcooked. A triumph of editing skills over listenability.

I do like Arvo’s radio shows though [judging from the other disc he sent me that is - I haven’t actually sat through one of his broadcasts in its entirety]. Delirious Music For Delirious People is a celebration of his Delirious Freeform Radio Show that goes out live both in Chicago and Split [and of course across the internet]. Its 23 tracks [au natural] showcase an eclectic taste that ranges from all out noise to punk to faux lounge muzak. I listened in awe to an amazing cover of Faust’s ‘Why Don’t We Eat Carrot’s’ by the Big City Orchestra, I discovered a bunch of nutters from San Francisco called Hans Grusel's Krankenkabinet, I heard tracks from Boyd Rice, Controlled Bleeding, The Centimeters, Jarobe and the delightfully monikered Diatric Puds & The Blobbettes. Which got me to wondering how somebody with such a wide and varied taste in music could create something as horrible as 333?