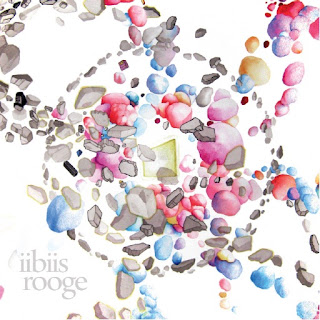 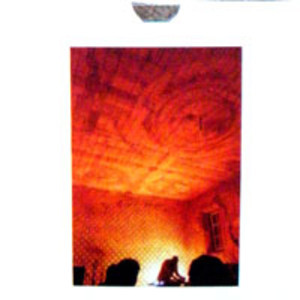 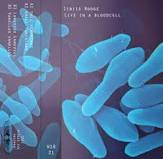 ‘Iibiis Rooge is the high-powered collaboration of Neil Campbell (Astral Social Club, Vibracathedral Orchestra and A Band) and High Wolf (releases on Holy Mountain, Not Not Fun, and his own Winged Sun label).
Their new album, Hespherides, is a welcome development in the duo's trajectory, with its immersive propulsion more refined and synthesized than their 2009 self-titled debut. That earlier effort showcased the possibilities and capacities of the two artists' collaborative spirit, each track exploring the individual aspects of a shared sense of sound with discernible cues from either Campbell's or High Wolf's discography. In contrast, Hespherides is a meticulously sculpted document that embraces a total sound -- one that denies prominence of each contributor by melding the psychic duality of the pair. Shifting industrialized ethno-polyrhythmic structures are transformed by droning, blissed-out textural threads that seamlessly coexist and contradict one another; Through two side-long process-driven mechanical meditations, a shared space is constructed, one that satiates anyone willing to gorge on the global, post-acid house, rainbow hypnotism that is Iibiis Rooge’.

All that psychic melding must take it out on a man ... although I wouldn’t have used such pompous language to say so, I think that messers Campbell and High Wolf did indeed get their psychic duality melded. Given the task of reviewing this platter for the weird Forest website I’d have said that between them they banged out a couple of decent sides of pulse gabba where neither side managed to stick their head above the parapet thus creating something that sounded like ASC in one channel and High Wolf in another [not as simplistic as that but you get my drift].

Thus the continuing collaboration conundrum. I imagine each artists sat side by side in an elbow shoving contest, each trying to shove the other of the end of the bench in a my sounds are better than your sounds contest. I know, I know I know, its not like that at all, its all peace and harmony and respect for each others work and thats how the garden grows, heres my bit, theres your bit, backwards, forwards, I know how it works. Sort of. Its just that I’m not familiar with High Wolf’s work whilst on the other hand I’m very, very familiar with Campell’s and therein lies my problem. Weird Forest hear ‘blissed-out textural threads that seamlessly coexist and contradict one another’; I get Campbell’s trademark squiggles and bleats and someone else making some thumping noises over the top of it. Its all very good in a very good way but it lacks a certain frission thats needed to get my juices flowing. On side two theres even a tendency to stray into Orb territory which as regular readers know sends me all a-shiver and fills me with the portent dread that the thing is going to include a sample of someone asking Ricky Lee Jones what the skies were like when she was a child. Ditto the tape.

Much more to my liking is the unadulterated Campbell. Especially in Astral Social Club format. Having reached number 22 in his self released, no hyperbole, swallowed a dictionary world he has created what is possibly the best ASC release of the lot. A remarkable achievement.

The six tracks and forty odd minutes of ASC 22 include the usual live gigs, helping hands of issue, friends and fellow knob twiddlers, theres the rabid, over frotted electric guitar to which Campbell builds walls of beats, the crystalline shimmer of a descending three chord trip against which a frenetic Pat Metheny plays a Gibson jazz with his head bent low and his fingers going twenty to the dozen, disco beats are turned around, clanking chains are used as beat fodder, a 4/4 high hat goes tsk tsk tsk, spoken words are heard in reverse, then running water, kids in a playground and through it all a mad desire to bob ones head in joyous accompaniment. This is where the ‘frission’ that was missing on Iibiss Rouge lives. Rough hewn tracks burnt to CD and emitted with as little fanfare as a blog post can muster.

One day somebody is going to go through the ASC self released archive and make themselves a truly unforgettable vinyl box set. I hope I live to see the day.

nice posting.. thanks for sharing.