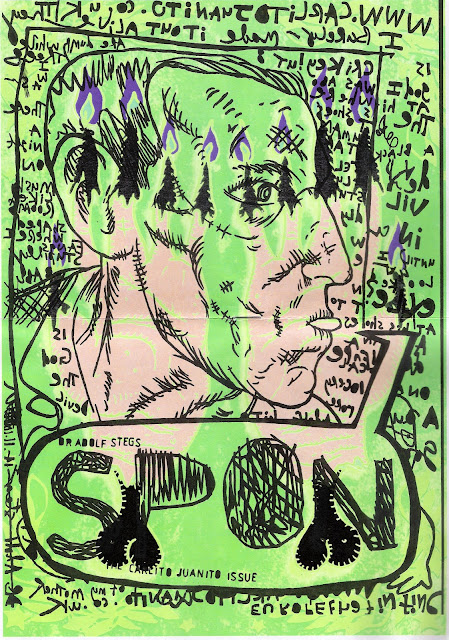 I’ve been having one of my major clear-outs again. I should really adopt a one in one out policy here at Idwal Towers but as ever laziness gets the better of me. As do the charity shops whose doors I pass through with great regularity exiting with books, shirts and records most of which usually end up making the return journey some years down the line. This recent clear-out has been particularly ruthless though, the floor standing electric fan that arrived with Mrs Fisher 13 years ago and has only been switched on about three times since has, along with two rucksacks and various other bits and bobs, found its way in to the arms of the Batley branch of the Salvation Army where two sweet old ladies took the crud off my hands with unhidden joy. Various CDR dubs of stuff I can get for free off the internet have also been jettisoned along with magazines, old spectacles, pens that hardly wrote and various items of clothing that I'd have to wait twenty years to see come back in to fashion. It does you good to get rid of stuff. Better to travel lightly than be weighed down by tons of crap you have neither the use nor the space for.

The day will come when I’ll have to start getting rid of things like this too but not before extolling its surreal virtues to your good selves. SPON 21is actually a mail order catalog for Blackpool legend Stan Batcow's extensive Pumf label printed in coloured ink on to tracing paper, which means plenty of Ceramic Hobs amongst the myriad of Batcowian delights, it also makes it very hard to read.

The CD is, I’m suspecting, 17 tracks of SPON creator Dr Steg’s favourite music with all the bands given aliases so as to escape some kind of fall out from the performing rights people. I’ve tried Googling some of them and have received in return nothing but nonsense which leads me to believe that they're all of Steg’s imagination. Could these artists and tracks really exist: Judith Cheescake [sic] - ‘Read My Aura’, Eggy Grin - ‘Lick His Toes’, Steroid Growth - ‘Enormous Breasts’ and The 5 T.V. Sets - ‘Moppet Body’? Between them they produce the kind of guff heard on adverts for mobile phones, a harmless genre of music that has an initial charm but which ultimately grates, twee, soulless wiffery that sounds like it wears a plaid shirt and lives in Scandinavia or some tumbleweed town in the American Midwest.

Another baffling edition to the SPON canon.