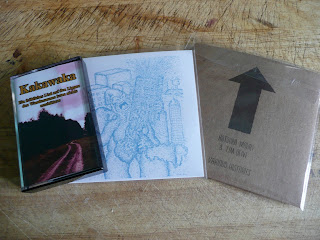 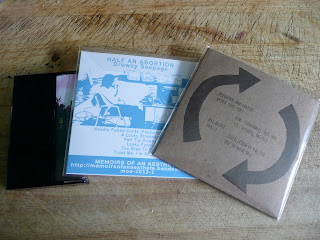 Half An Abortion - Drowsy Seepage
Memoirs of an Aesthete. CDR.
MOA-2013-1
75 Copies + download

Apologies for the crappy images above but my scanner isn't behaving. Its not how I like things to be presented you see. Not that I'm a hysterical perfectionist but a scanned image gives detail and highlights the artists wares. Its like Kenny Morrison sez, everything's in the detail. As it stands now you're struggling to see that King Kong like figure ripping up a skyscraper and sticking his penis in it whilst ejaculating through the windows. You'll struggle to see Pete Cann sat at his desk in contemplative mood on the reverse looking like a 70’s German synth pioneer pondering whether to put some batteries in the Walkman and if the the mixer he bought on eBay for ten quid will last for another thirty minute set. You will not see the Kakawaka countryside image in all its fold out J-card glory but you will note that the Tim Olive/Katsura Mouri release is a thing of simplistic beauty and design and its here where we should begin. I like clarity.

What initially put me off Kakawaka was the Kakawaka website [and it has to be said the name itself which I assumed was another Filthy Turd offshoot]  - a  horrible, eye searing glare of canary yellow background, red font and cerise blue links, its titles also being a blurred pixilated mess that would in no way lead me to believe that the person behind this disfigured piece of the interweb was in any way capable of producing something, that whilst no way a classic, is indeed a very good twenty minutes worth of its genre. That genre being Industrial Lite Ambient Ritual Field Recording.

Kakawaka give us two ten minute tracks of processed field recording, reversed tape engineering, noise and an atmosphere that lies somewhere between Dieter Müh’s more quieter moments, Chris Watson on steroids and with perhaps a certain leap of imagination, some of Column One’s output.


I’m guessing that Mr. Kakawaka likes the great outdoors to such an extent that he brings them home to his studio to process them with a sprinkling of Industrial Lite Ambient Ritual Field Recording Noise powder. Here we have the squeaky shaft of a windmill as a stand alone opening before lots of sped up in to reverse sudden stops, squawking crows and glitches before the sound of discordant frequencies being bent into shapes unknown. Crunches, bowl rings, insect chatter and ritualistic drums beaten to galley slave rhythms. All this on ‘Immer Diese Schuld’. The reverse is much better, ‘Überall Nur Widerlicher Schmerz’  begins with a tiny clock panning around your skull before layered thighbones are blown in a medieval jousting competition fashion. Cue a heavy downpour, some held down keyboard key drones and the sound of a car door banging shut at its conclusion.

Noisy Pete [AKA Half an Abortion, AKA Pete Cann] gives us six tracks of elcetro-acoustic gubbins that show Mr. Cann at his most thinking best. Having got the urge to smash things up out of his system [for a while at least lets assume] he gives us plenty to ponder, especially on the first three tracks where sawn bits of tin and noise gadgets of a various nature are tweaked into sound waves that disappear out of the top of your skull. Proper electro-acoustic noise that’s in a constant state of flux, bubbling and boiling and at times exploding into noise rupture. My only gripe are a couple of rather muddy tracks that appear to have been recorded in a room layered in felt. Murky noise of a mid 90’s cassette bent thats best left well alone. But I forgive him because this has changed my perspective on Half an Abortion and Pete Lives In Leeds and this is on the Memoirs of an Aesthete label which is Phil Todd Who Lives In Leeds.


Meanwhile back in Japan we find Tim Olive continuing his collaborating ways, this time with Katsura Mouri. On previous releases Olive has played a one string electric guitar, guitar pick ups and analogue electronics, on ‘Various Histories’ he’s back with the pick ups and this time ‘metals’ with Mouri being credited with ‘turntables, edits and mix’.

And as with those previous releases the sound quality is simply stunning. The pairing is also a success with Mouri’s turntable antics combining with Olive’s deliberations to produce an almost Smegma like electro-acoustic session. A series of fumblings and clangings, small springs being twanged, wire brushes bering combed, the deep throb of a submarines engine.

Five tracks spread over thirty five minutes is perfect and with one of those tracks [the last, all untitled, perfect] hogging half the release it gives those of you with attention deficit disorder something to hang on to. That last track is a delight with Olive’s metal playing coming to the fore with steel cylinders being rolled and loose wires being monotonously plucked over guitar pick ups delivering that glorious low twanging sound. Its the up close to ear attention to detail that grips you though - the tickling of the ears with sounds culled from table top detritus entwined within a body of sinewaves and low end throbs, the broken pottery being sifted through that compliments an emergent buzz, the discordant thrum of seriously detuned guitar strings as accompaniment to glass crunching. A complimentary pairing.

Chuck in the bold design, plain brown card CD liner and you have a label worth following.