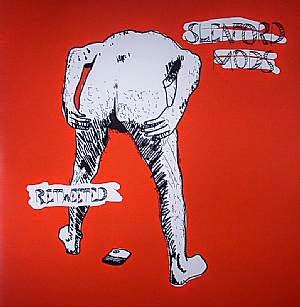 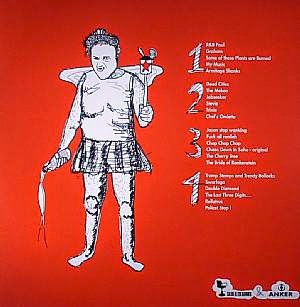 I was taken to task by a reader who said that my review of the Sleaford Mods second album Divide and Exit wasn’t their second album at all. He was dead right. There were five albums before Divide and Exit and its precursor Austerity Dogs exploded all over the broadsheets. Long before journos with shoulder length hair got whiff of Austerity Dogs and Divide and Exit the Sleaford Mods had released an album called Wank along with four others all of them appearing between the years 2007 and 2012. I first spied Wank on Underwoods coffee table in Notts. The word 'wank' superimposed onto a picture of a bag of chips. Yeah, funny I thought. That night at the Rammel Club I saw the Sleaford Mods live for the first time in what is now their current incarnation; Jason Williamson and Andrew Fearn. Williamson in a t-shirt with a neck wide enough to get two people. Fearn bobbing about like he's loosening up for a limbo in his trackie bottoms.

The past was just that, from now on it would all be about the future.   So there’s a year zero thing going on. Best to start afresh. Delete all the back catalogue and put the best bits of it on a double album. Can’t re-release all that back catalogue stuff mainstream because its chock full of samples that’ll see them in court, Sex Pistols and The Yardbirds and plenty of other punk and 60’s R&B bands.

What you take from these four sides are Williamson’s observations, jokes and piss takes, the sex, the mundanity, the dole, the shit jobs, the coke and the Stella, the conversations. We are inside Williamson's head and its full of lager fumes, class A residue and confusion.

Wanking his bird off, wanking himself off, [Jason Stop Wanking], getting paid to shag someones wife on Trixie:

‘Trixie what are you gonna do, that double-ender’ll be the death of you’ all retold in an eerie high pitched speeded up voice that makes his revelation even more surreal.

'This is dedicated to the wankers that were down from day one' and then ‘You’ve got some upduck in yer hair’. Upduck? Whats up duck?’ From American west coast gangsta rap to a Nottingham school yard in the width of a record band.

Then there’s the deadpan one liners:

The path to enlightenment doesn’t exist anymore, you’ve got to get the bus

Pearly pearls of wisdom. Four sides full of them.

Just as I was getting the nod from Underwood on the Sleaford’s I went digging around on Youtube and found ‘Double Diamond’. It blew me away. The promo for it was filmed in Nottingham city centre in a crepuscular light that showed Williamson in a three quarters length overcoat talking to who knows who swaying his arms to the loop of a soul track in which you get to hear a female vocal sung over and over again. The effect is hypnotic. Williamson gives one of his best performances screaming spittle into the face of a non existent drug dealer who wont bring him what he wants. Lost at first he thinks aloud, stream of conscious mutterings;

These early mornings just fuck me up ... I don’t like puddings ... I got a fish bone hanging from me gob like a matchstick mate ... I want a big bum hole to suck me up ... WHO GOES THERE! … I still don’t know what the fuck I’m on about duck ... Minimum cage, maximum cage.

Even with all that has passed since its one of his finest moments.

Not everything works though. Chop Chop Chop may contain Joycean leanings towards bowel movements, shagging, fighting and drugs but at just over eight minutes and with nothing but a chugging punk riff for company it stretches matters somewhat but this is small beer that needn’t be spilt over four sides of what has to be said is, a goldmine of Williamson gems. It did make me wonder whether this really is the best of the past or just a quick trawl that leaves further gems waiting to be uncovered though.  I guess time will tell.

Retweeted has long since disappeared off the shelves and now goes for north of £50. Thats still cheap for what you’re getting. Retweeted also shows that the only thing that Williamson needed for the Sleaford Mods to achieve take off velocity was bumping into Andrew Fearn. On such happenstance greatness is made.

There is a ton of old stuff that has not been released except on MySpace years ago... some corkers..