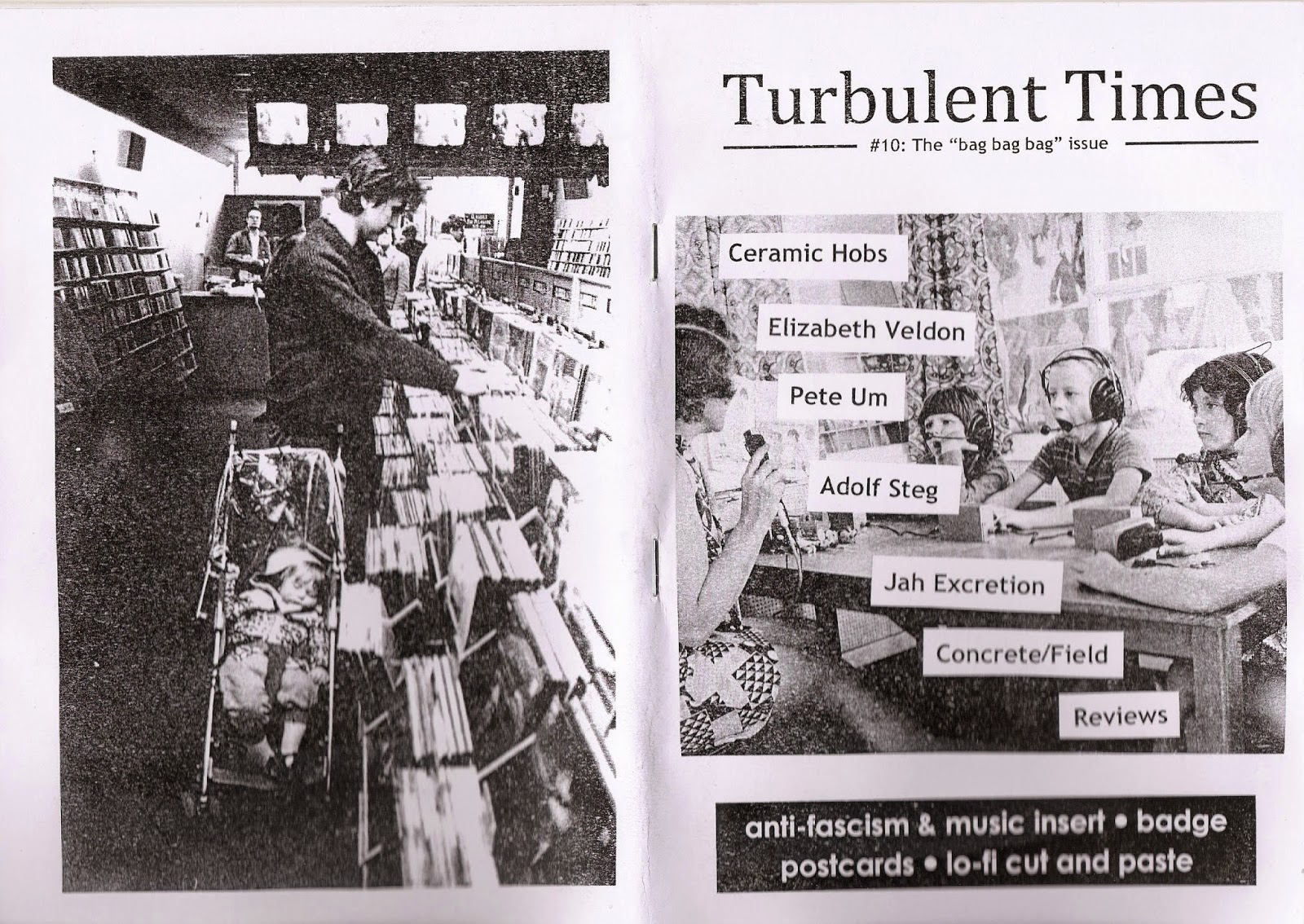 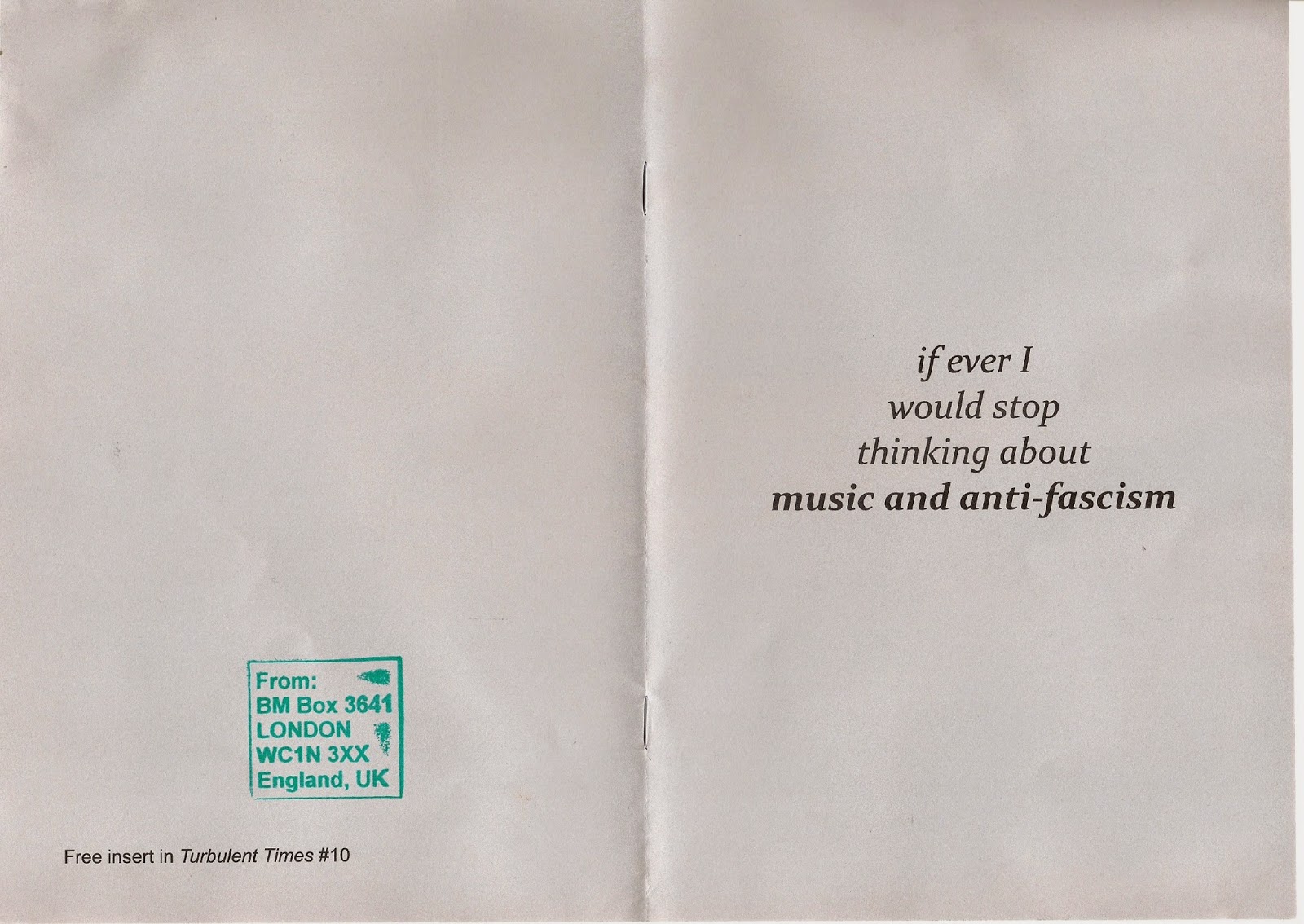 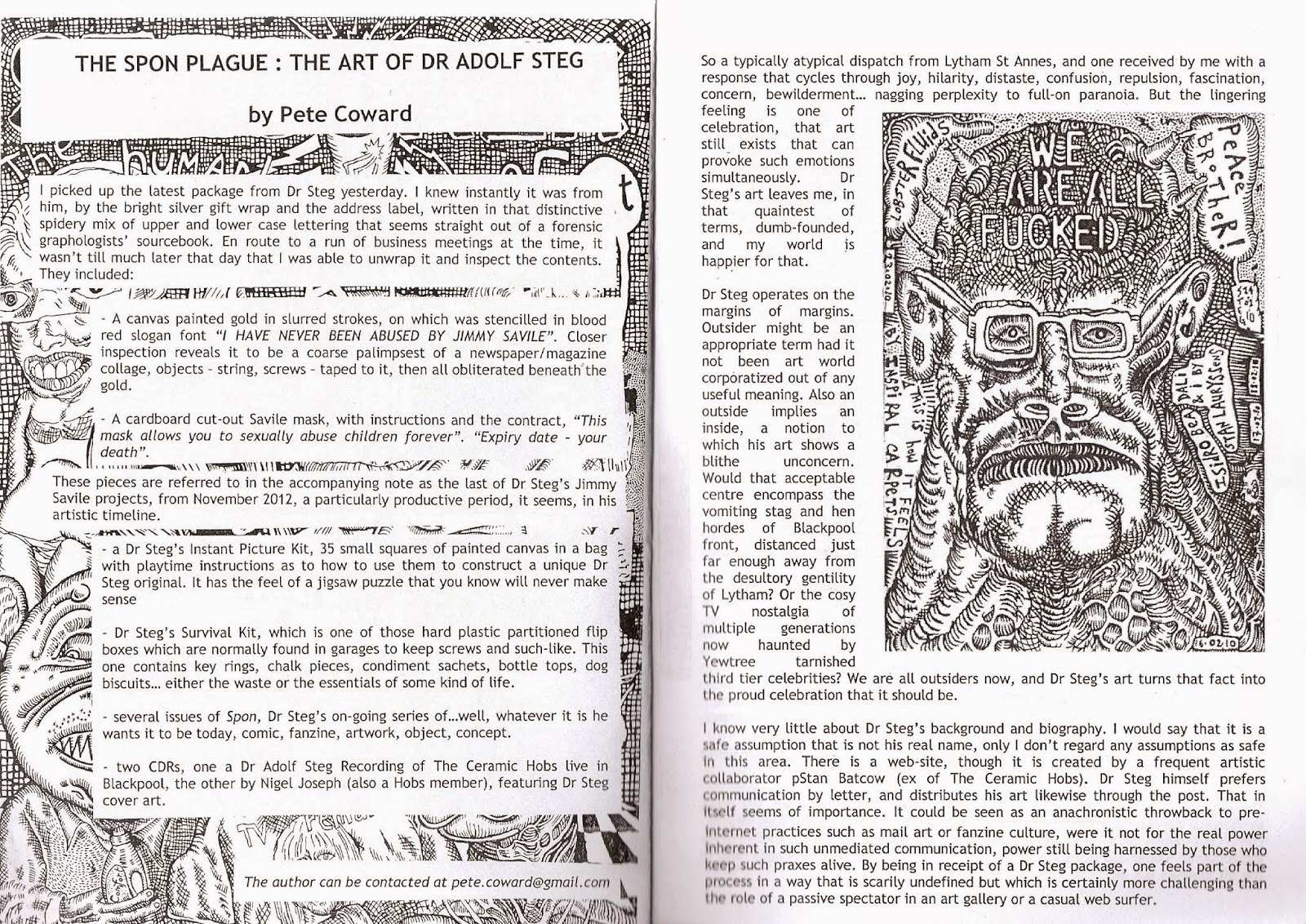 60 page A5 zine,  8 page A5 insert, 2 x postcards and a one inch button badge with the words Degenerate Waves on it [black 70's computer font on yellow background - not shown].

At least we didn’t have to wait for fifteen years for another issue of the excellent Turbulent Times to appear. That was fifteen years between issues eight and nine in which editor John Eden decided to spend more time with his cabbage patch than with keyboard and pen. The wait is now down to a year which suits me fine.

I heaped praise on issue nine and I heap praise on issue ten. The reason I heap praise is because John Eden has the jaundiced eye that every zine writer needs. Not for him the enthusiastic yap of a wide-eyed teenager whose just been to his first noise gig and is now busy scanning eBay for cheap guitar pedals. Eden even reviews records he cant find anymore. This is more like it. Seat of your pants zine writing with plenty of the self and none of the psuedo wankery, dodgy font shit that ruins many a publication. It almost makes me wish I still did a zine. Well, almost.

In issue ten you get two enlightening interviews with Simon Morris of the Ceramic Hobs who despite being forever associated with mental imbalance always comes across as the most sensible person you’ve ever met. In the eight page accompanying booklet he holds forth on fascism/anti fascism in music and in the main zine on The Hobs. Both are worth your time.

There’s further interviews with now ex noise artist Elizabeth Veldon which highlights just how Neanderthal some noise fans/artists can be when faced with someone who has a brain and Pete Um who just can’t seem to make his mind up. Concrete/Field and Jah Excretion bring in the rest of the field and lets not forget the impossible to be dull artist Dr. Steg who gets an outing in a piece written by Pete Coward.

Its in the review section where Eden shines brightest though. His pieces on The Extreme Rituals Festival may be two years after the event but who’s complaining? As far as I’m concerned I was glad of the reminiscences and being enlightened as to the bits I missed. Trevor Wishart, The Residents and events at Bexhill Pavilion involving experimental electronic artists of a European bent also get a mention. Best record review goes to a spelling mistake of a band called müllGRMM TÜTEsk whose record he cant find. Its the kind of personal touch you just cant find in mainstream publications. The Wire should give him a job pronto but I dare say he’d tell them where to shove it.

thanks for the correct summary of the fantastic zine.


here's the spelling mistake nobody can find: https://totstellen-grmmsk.bandcamp.com/album/m-llgrmm-t-tesk-2014