The Thomas Family and Daniel Thomas 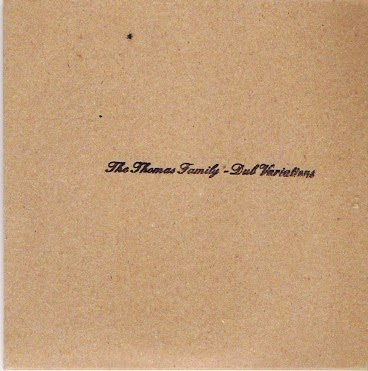 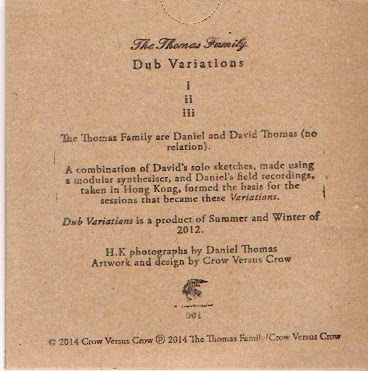 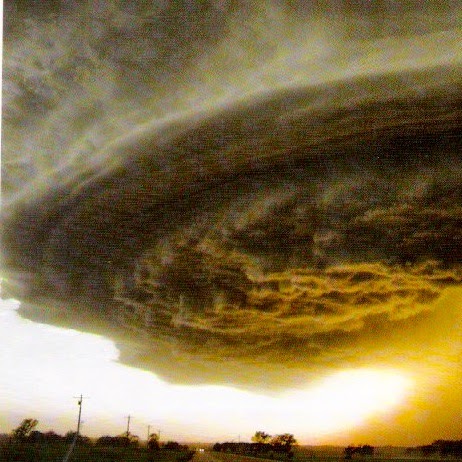 
A frosty Saturday afternoon and nothing but the sound of hot coals settling in the grate as the world does its Christmas shopping. An ideal moment to immerse myself once more in what is now commonly called 'Extraction Music'. We can call it little else now. The phrase fits. The Bearded Wonder has cast his spell. Extraction it is.

So I sit in a warm room with my feet up and the rather lovely first ever Crow Versus Crow release in my hands. What better way to break the silence. I will listen to this and Daniel Thomas’ new Cherry Row recording and that will be it for today I will limit myself to two releases. Its what I’m calling ‘Deliberately Restricted Listening’. Why not restrict yourself to one or two works a day? Like you would say a film or a visit to an art gallery. Why sate when you can savor? Why listen to things at random? What are you doing, filling a void? Are you scared of the silence? Are you one of those people who cant bear silence? Have you tried silence lately? Silence will help you think. Its not scary. You should try it.

Instead of listening to music in a random fashion with little in the way of thought or premeditation, choose to listen to one particular piece and then nothing else. Think about what you want to listen to, give it some thought and when you do play it sit and listen to it all the way through with as little distraction as possible. Make time for it.

This idea came to me earlier this week when for the first time I sat and listened to the entirety of Beethoven's Missa Solemnis. Arguably his greatest work, this 90 minute mass for 260 strong choir, 80 piece orchestra and four soloists opens with, for my money, the kind of music capable of turning atheists into deists [perhaps part of the intention]. But after that first ten minutes I kind of drift off and wonder what that is over there and wheres my wallet and have I paid this and that. Never in years of listening to this work have I sat and listened to it in its entirety. Could this composition, which Beethoven worked on and worried over for four years of his life [and this is as musical genius we're talking about here not some neurotic rock star with an ego problem and a cooing staff of fawning arselickers trying to coax a fourth album out of him], could this man have composed a work that captivates audiences the world over and me just the first ten minutes? So I sat and listened to it. All 90 minutes of it and its true beauty became apparent. It still didn’t make me believe in God, but for 90 minutes I was transfixed. I have learnt to sit still and listen. Its taken me a while to get here but now that I am there’s no going back.

I saw Daniel and Dave Thomas [forever to be followed by the words ‘no relation’] separated by the middle of a table at the Wharf Chambers last week. As Hagman they were first on in a series of bands that pushed the lower end of the PA and in Midwich saw Rob Hayler reach a peak of such joyous head bobbing proportions that I had to fight the urge to rush over and give him a big ‘I’m Happy For You’ manly hug at its conclusion. It was another good WC night.

The Thomas Family’s Dub Variations gathers together David’s solo modular synth work with Daniel’s field recordings in three pieces that were the results of recordings made a couple of years back. Its a fine fit with the twittering Honk Kong wildlife [both human and birdlike] proving to be the perfect accompaniment to standout track ‘III’, a 17 minute smooth ride of synth pulse and drone with the odd enthusiastic TG bass splat for company. The way that ‘III’ moves from from random key prod into an urban ritualistic analogue nod fest provides us with the key piece here. Think Pink Floyd’s One of These Days for the Extraction generation with added exotic wildlife. ‘I’ and ‘II’ are much quieter affairs. Here we have desert dust storms, the ubiquitous hum of distant traffic, station announcements, minimalist explorations into the corners of empty factories where the light rarely reaches, bleak affairs made for near silence.

On ‘Visitors’ Daniel Thomas moves away from the Schulze like pulses of this years earlier Cherry Row outing ‘Enemy Territory’ and into Sci-Fi territory with a kick off track that involves movie samples [‘Daniel, somethings happening!’] which in lesser hands could have emerged a tad Orb-esque but no. From there on in things get murky with helicopter rotor blades, synth burble and a series of sparse recordings that only emerge from the gloom when a melody of sorts appears on track five. Track six which at 17 minutes is easily the longest is the beating heart of the thing and like the last track on Dub Variations the reason you need to get this.

It would appear that there is no limit to the permutations available to those Leeds residents partaking in Extraction, to list those permutations would ensure a long scroll down this page. Now is not the time. The Thomas Family is but another welcome addition as is Crow Versus Crow whose Sowerby Bridge base gives us another pin on the vibrant West Yorkshire electronics map. Smashing cover work too, printed card, simple but effective. Looks nice in front of the fire. Not too close now.