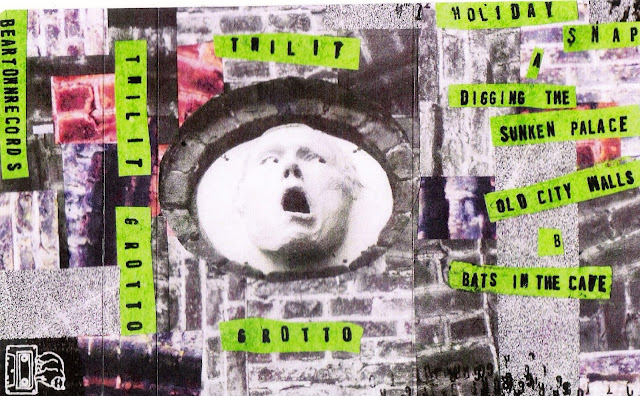 
Should you judge a book by its cover? Should you judge a crap noise cassette by its cover? I do? And for my prejudice I pay the price. Thus the twisted gargoyle on the front of Twilit Grotto’s Holiday Snaps release has remained unplayed for many months just because I took an instance dislike to their twisted gargoyle cover and, it has to be said, the rather daft name [which also appears to be the name of an archive of esoteric writings - perhaps there is some connection, perhaps I care, perhaps I don’t]. If I’d been a proper music journalist [ … ] it would have gone on to a prepared list whereupon it would have received clinical attention six months ago and then, and then you would have been able to buy a copy. Because buy a copy you will want to do after I tell you all about it.

Forget the gargoyle [to be found on the walls of an insane asylum in Ghent and the very mask of one its former patients] and instead think analogue synths and rather bizarrely a mixture of folk and synth drone and some kind of twisted power electronics, finger in ear folk drone, Keith Emerson Daggers and the synth stabs of early Soft Machine albums drone folk sing thing. Whatever this is I don’t have a name for it and that I rather like.

Twilit Grotto is the project of the ludicrously named Mr. M Shit who describes what he does as Heavy Electronic Evacuations. Which is certainly true of ‘Old City Walls’ which begins with some seriously delightful synth squeals before Mr Shit begins singing in a voice more often to be heard in folky pubs intoning the virtues of old boats and the value of the fiddle drill. Folk Electronics anyone? The way this track escalates into a wall of screaming frequencies while being anchored to a twin bass bomb drop made me wonder if this was a first for the melding of two very opposite genres?

The side long ‘Bats in the Cave’ has Mr Shit phasing that same vocal folk drone over Wasp like synth throbs that pan through each ear before spiraling out of control with ever more frantic and delirious energy. Like an electronic firework display soundtracked by Steelye Span and a Moog Orchestra.

First track ‘Digging The Sunken Palace’ is probably the weakest of the three seeing as how it sounds for the most part like the end of ‘Bats in the Cave’ but who am I to complain? I just found myself a whole new genre.

But now the sad news. Due to my dislike of gargoyles on covers the measly 30 copies of this have long since gone. The good news is that you can still get this as a download. Hello Mr Shit.