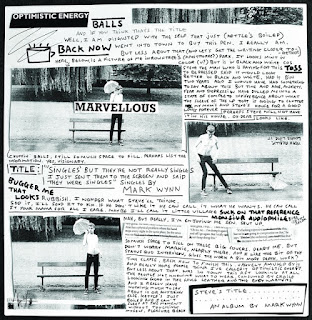 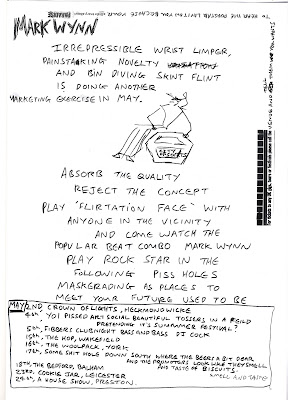 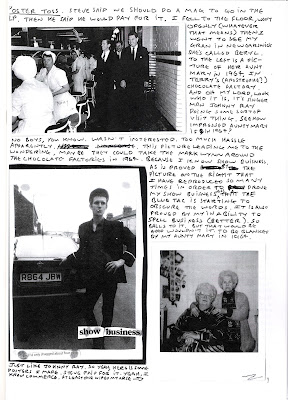 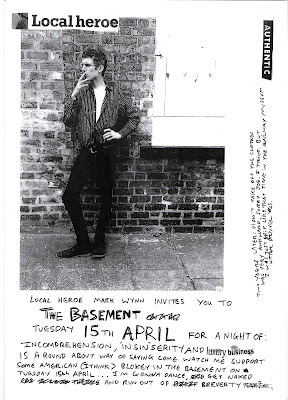 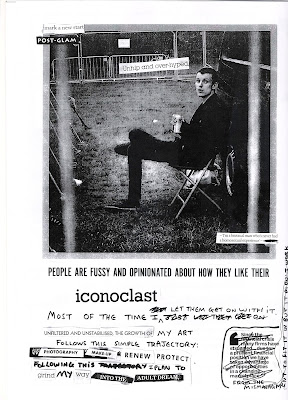 Mark Wynn - ‘Singles - But They're not Really Singles, I just sent them to the Screen and said they were Singles’.


Its not often I see the names of those I’ve reviewed getting a mention in the local paper but there was Mark Wynn’s name next to Burts Trad Jazz Band at The Wickham Wednesday night 8.00pm as appears every week in the Spenborough Guardian's ‘Whats On’ column. This, not long after he’d sent me one of his CDR/zine releases packed to brimming with two minute guitar strum avant punkish wit, everyday observations, one sided conversations and a cut and paste zine the likes of which I thought had died out forty years ago.

I did my research for that release and discovered that Wynn had a previous life in which he fingerpicked blues and country songs, the sort of thing that would appeal to those who attend Heckmondwike’s Comrades club and their once a month Crown of Lights acoustic night. The sort of evening where people sit around candle lit tables listening to wannabee Suzanne Vegas, Billy Braggs and Noel Gallaghers. So me and Mrs Fisher went along knowing full well that Wynn had left behind his fingerpicking past and was now supporting Sleaford Mods and was taking to the stage with a ghetto blaster that played his pre-recorded songs to which he sings/talks whilst stripped to the waist, an emaciated Jaques Tati on mind bending drugs, Iggy Pop from York, a deranged, bare chested Frank Spencer.

After a Suzanne Vega and her partner had chimed their way through 20 minutes of heartfelt whimsy as written in a Welsh cottage on holiday in the middle of winter 2010 and Billy Bragg had channeled Joe Strummer with a maraca tied to his left foot it was Wynn’s turn. As he plonked his ghetto blaster on the stage I heard one of his friends shout ‘where’s your guitar?’, a comment which was soon drowned out by whatever it was Wynn had recorded which could have been the energetic ‘ She Fancies Me That One In Age Concern’. As is the norm the whip thin Wynn stripped to his waist within three minutes of taking, not the stage but the floor, and was posturing his way around the scattered punters blowing out each of their tea lights in turn to which many stood up and beat a hasty retreat to the snooker room. By now me and Mrs Fisher were rolling around in mirth hoping he’d keep this up for the rest of the night but no, it was all over in about ten minutes. Wynn pressed stop on his ghetto blaster and told his audience that that was his last song to which there was a smattering of polite applause and a very audible ‘thank fuck for that’ before he shouted ‘ONLY JOKING’ and pressed play once more regaling us all with his instant classic, ‘Rip Off The Fall’. Our amiable Irish host took to the floor with his radio mic and tried to make light of what had just happened by saying something along the lines off ‘well, you never know what to expect from Mark Wynn do you, oh oh oh?’ It was a night I shall never forget.

The next time I saw Wynn was September last year supporting Sleaford Mods at the Irish Centre in Leeds. Same sort of get up but this time he’s even thinner and is sporting a child’s tiara. He’s got all his gear set up on a small table to which he occasionally sits and twiddles something as he eats grapes before leaping up and walking around the stage delivering songs in rapid fire succession in what feels like an almost stream of consciousness delivery.

I get the feeling that he’s an artist incapable of stemming the constant flow of ideas racing through his head. Take the cover of his latest ‘Singles’ LP which is in part a letter to Harbinger Sound supremo Steve Underwood apologising for not offering up a proper cover.  All handwritten in caps and worrying about whether  Rowntrees should have an apostrophe and whether ‘color’ should have a ‘u’ in it. There is of course the obligatory photos of himself staring into the camera [he’s made for the camera], shirtless of course and with a picture of his grandfather on the reverse for good measure.

Wynn takes his cue from the Versatile Newts, the Popticians, the TV Personalities, Desperate Bicycles, a very English kind of DIY punk aesthetic but right here and now in 2016. Think Patrick Fitzgerald having an urge to write songs about Battenburg and Bukowski. An unstoppable force of creativity. I dare say you could put Wynn in a white room with five objects and before the night was out he’d have the beginnings of a new album.

There are 18 songs here [not all singles of course that was Steve’s idea as you can read about on the cover] and have titles like ‘I Just Don’t Understand Nick Cave’, ‘Real Sausages Made by a Real Butcher’, ‘The Girl Who Looked Like Bobby Gillespie’, ‘Your Nan is Not an Invalid’, ‘She’s My Baby And She Makes Me Die Inside’.  ‘I Just Don’t Understand Nick Cave’ begins with a hard strummed electric guitar and Wynn shouting ‘I’m not even that drunk’. Its probably all over in less than a minute. Most songs are just the retelling of things that happened accompanied by handclaps, tambourines and primitive drums and did I say they were catchy? His songs are as catchy as ebola. He sings in a talking voice. Listening to him is like catching a conversation across a table in a greasy spoon. Some nifty guitar work on ‘Houses on the Green Grass’ give away his previous incarnation in a song that is about … about what? I have no idea but its as catchy as hell and mentions Leeds. ‘Your Nan is Not an Invalid’ mentions New Earswick and Halifax. I’ve heard songs of his that mention Batley. I saw him in Heckmondwike. I doubt I’ll get the opportunity again. ‘John Tries To Buy Some New Tappers - A Movement in Three Parts’ is about his friend going to work in his socks because he has no shoes. ‘Battenburg’ is about Battenburg and has Wynn shouting ‘MULL OF KINTYRE’ in it. ‘Knee Socks’ … you get the idea. ‘She’s My Baby And She Makes Me Die Inside’ sounds like the Stooges with Wynn singing through a bullhorn. And its all utterly brilliant and as fresh as a newly opened packet of GV.

All 18 tracks on 'Singles' were culled from the last two years worth of Wynn's numerous self released CDR's, so what I suggest is this; buy 'Singles', play it to death and whilst you're at it buy up all those CDR's because you're going to need those too.