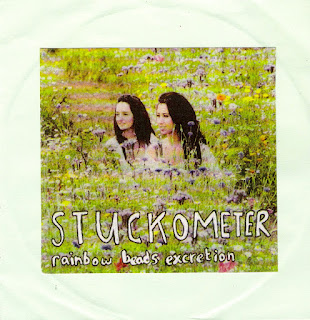 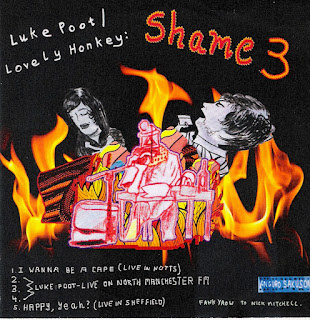 Has as been kindly pointed out me, I’ve gone and got my Pascal’s mixed up in the below review. Pascal Ansel is a Tiggerish young man bursting with enthusiasm, youth and energy, he’s the one whose leaving Leeds for Lisbon. Pascal Nichols is the gentleman who plays in Stuckometer. This much I now know. I leave the review as is, a monument to an aging brain and testament to my continuing ability to not get even the simplest of facts right. I like to think of myself as the John Peel of reviewing, always playing records at the wrong speed, always getting my facts wrong but not really caring that much and still happy in the knowledge that I have the ability to engage brain and hands from which words appear on a screen. Here’s to old age.

So farewell then Pascal Nichols. You gave us lots of memorable noisy live performances like when you stripped to your knickers and poured beer over you head in the Wharf Chambers. You were making some godawful racket that sounded like Stock Aitken and Waterman channeling Whitehouse and it was grrrrrrreat. Your enthusiasm gave those of us with flat batteries an unexpected recharge, you even took up the improv baton in Leeds while those around you looked to their shoes and mumbled words like ‘thats the night I wash my hair’ and erm ... ummm ... you run a label with an unpronounceable name [unless you're Japanese and then it makes a lot more sense] and now you leave Leeds for Lisbon which makes us sad.

Having listened to these two releases over the last couple of nights I cant help get the feeling that Nichols feels most at home with his improv cap on. I mean making noises in your underpants is a good way to pass a Sunday afternoon on but improv has a certain gravitas to it which Nichols fits comfortably well.

Rainbow Beads Excretion sees Nichols join David Birchall and Karl Sveinsson for two approximately thirty minute-ish tracks of outrageously good guitar, bass and drum flail. Coming in at the more cerebral end of the improv spectrum this is no Unky Thurst send them all packing at midnight last act on lets see hows many’s left when the lights come up teeth bared molten lead earbleed-a-thon, even if it does have its Keiji Haino moments. Which is where we begin but things soon plateau so as we can experience the rub of bass, the scratch of bridge strings, the rattle of drum, the wheeze of keyboard feedback, the clang of chord. All I ask of improv of this nature is for to be carried along, to be not bored, to not think that oh that bit sounded a tad cliched, I think they were running out of ideas, they were bored, they fell asleep. I felt none of that with this. Second track ‘Fill Fill Fill’ begins with jack plug abuse, squeals of metal against metal, tiny bells, the clang of tubular bell-like things and distant whoops. An austere atmosphere that feels like the soundtrack to a difficult avant gard film form 1950’s France thats punctuated twice along its length by two mighty buffets of improv storm.

Who Luke Poot and Lovely Honkey are I have no idea but just to hear once again that mildly racist term of abuse as last seen in the 70’s sitcom Love Thy Neighbour has raised my spirits no end. I hear Scottish accents and the first track is all muffled mutter words and shouting, drunk people calling to each other across a public park while trying to get a noise gadget to work. There then follows three live segments as recorded for On North Manchester FM in which Mr Poot affects emphysema, wind and baby gurgles while playing  snatches from a cassette that contains samples taken from Match of the Day including David Taylor saying ‘do I not like that’. I’m assuming that the producers at On North Manchester FM have sympathetic producers and are used to people coming in to their studios and shouting ‘STREPSILS’ as people have their breath sucked out of them. Last track ‘Happy, Yeah?’ is another live one, three odd minutes worth of odd sounds, film dialogue, scuffling, squeaking but mainly film dialogue which makes me wonder what Poot and Honkey were up to all this time? Watching the films? Were they displayed? We need to know. For whats coming at me now makes about as much sense as freezing lettuce. At least the audience liked it. And Pascal.


Total Vermin [not been updated for a couple of years]