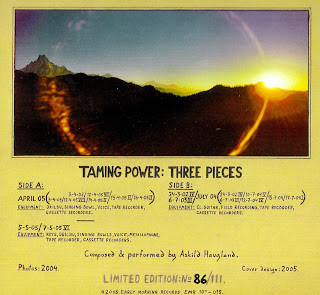 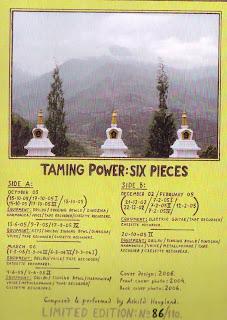 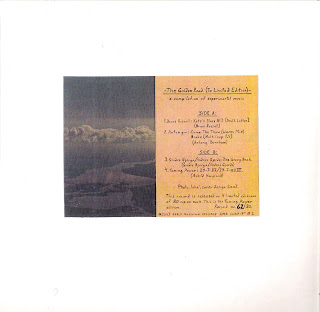 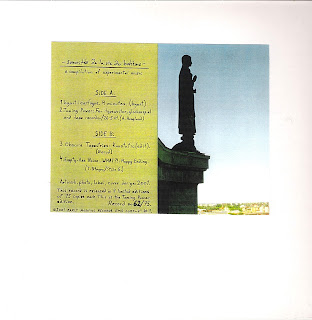 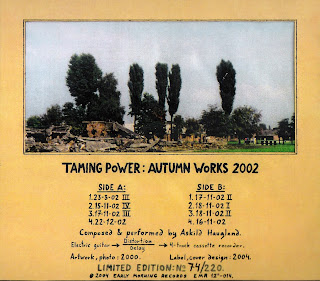 Who’d have thought that an obscure Norwegian drone artists could have such an effect on a small community of listeners in West Yorkshire? Mention the words ‘Taming Power’ at the next noise gig down the Wharf Chambers and you will see several balding, unshaven men of a certain age go visibly weak at the knees. It’d be a good time to stiff em for a drink as they’ll be drifting away on some recent memory of a night spent in spinning Taming Power vinyl, the woes of the world banished by drones capable of sending you into mindsets and moods that you thought were only achievable through designer drugs of a William Burroughs nature. Five stoup's of your finest mead stout landlord and he’s paying.

What makes the Taming Power experience all the more mind boggling is that these records still exist and are available to buy 15 years after they were pressed and that Mr Taming Power himself Askild Haugland, is still pulling out the odd copy to send to acolytes such as myself, Neil Campbell and Rob Hayler. All this while Record Store Day 2016 morphs into an excuse to offload expensive reissues of the kind of crap you can still buy on Discogs for pennies. Its enough to make a balding, unshaven man of a certain age cry into his mead.

Over the last couple of years several Taming Power packages have made it all the way from Norway each and every one spun into infinity, each listen bringing with it, amongst other things, a head shake of disbelief. For it is in disbelief that works such as these aren’t being more widely lauded. Still. Thanks to Campbell I’ve been pushing Haugland’s work for a couple of years now, this after a cheap CDR of his more abstract feedback/noise work was shoved into my hands in an Heckmondwike boozer. Little did I know that this slim promo disc would result in a number of packages arriving here containing vinyl that not only takes up pride of place on my groaning vinyl shelving but is now cemented as being amongst my most prized possessions. In my head I keep rewriting the list of things I’d save in a house fire and if I had a steel box that could hold 50 records all of the Taming Powers would be in it. Especially the ten inch vinyl which is where Taming Power seems most at home.

Haugland’s ability to conjure up such devastating and sublime work lies not only in the simplicity of his instrumentation but in the simplicity of his handwritten, glued on photo sleeves and the continued use of recording dates as track titles. A recipe that gives his work a unique quality that mass production can never replicate. ‘Autumn Works 2002’ again employs the electric guitar going through a distortion/relay set up before being fed into a 4-track recorder to skin tingling effect. A simple set up that is enough to create drones that range from the wildly ringing to the bleakly austere and haunting. On ‘Three Pieces’ and ‘Six Pieces’ Haugland once agains finds himself among the singing bowls, metalophones, field recordings, cassette recorders and tape recorders and with them gives us the side long B-side ride to ‘Three Pieces’ thats a looping, unforgettable sunrise across an blasted Arctic tundra. On ‘Six Pieces’ you will find comparisons to Nurse With Wound’s ‘Soliloquy to Lilith’ and with it the deathly moans of Haugland himself, there’s a school bell that rings out too perhaps telling me that its time to put my Taming Power records away for a while. Its not going to be easy.

The singles meanwhile are but an amuse bouche, the small glass of amontillado before a sumptuous meal. They feature the work of Bruce Russell, the ubiquitous Sindre Bjerga, Taming Power and  some people I've never heard of who have no doubt gone on to other things since. Fragments to get you in the mood. To Planet Haugland then with mead in hand.