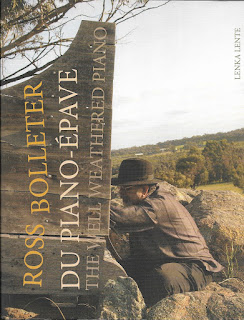 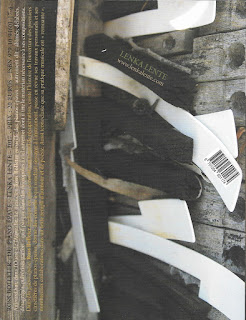 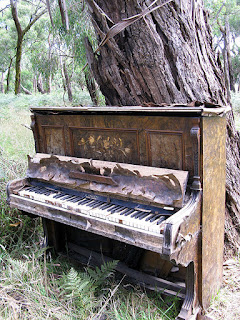 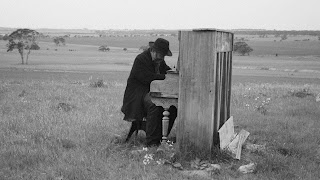 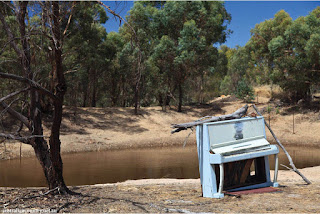 
Ross Bolleter plays ruined pianos. Ruined as in ruined by the elements. In most cases the elements of Western Australia which is where Bolleter resides with several ruined pianos, most of them in his kitchen, the rest in the laundry room. I trust he has sympathetic neighbours. The climate in Western Australia proves especially conducive to ruining pianos which may go some way to explaining why ruined pianos aren’t a big thing in the UK and Northern Europe where a couple of harsh winters and a soggy summer would no doubt see a piano reduced to wet wood and oblivion. Scorching Western Australian summers along with the occasional flood are the perfect climactic conditions for turning once proud instruments into rats nests, frogs homes and quite possibly the ultimate improv tool.

The distinction between ruined and its poorer cousins devastated and neglected is important here; the piano has to have spent some time out of doors naturally degrading rather than being the subject of violence [a lounge piano in a war zone perhaps or a physical attack] or plain old neglect [a piano left to its own devices in a room no one visits anymore].

If you have enough of them you can create your own ruined piano sanctuary. You can visit it yourself. At the last count there were forty ruined pianos scattered about Kim Hack's and Penny Mossop's olive farm near Perth, all of them slowly returning to the earth, soundboards cracked, veneer flaking, keys swelling and shrinking, broken hammers clacking, drying and crumbling and along the way making the most incredible sounds.

I have to admit to not having heard of Bolleter before this book arrived and in a blinding epiphanic flash realised just how capable a ruined piano could be in the improv stakes. Once taught bass strings slapping against cracked wood, rotten felt hammers hitting rusty piano wire, thuds where once lived ringing overtones, plinks and plonks and what Bolleter calls ‘clicks, doks and tonks’, sounds that to him are as interesting [if not more interesting] than the sounds the instrument was originally made to produce.

The book is at its best when Bolleter and his collaborators recount tales of finding ruined pianos, describing with uncontrolled glee the states of decay they find them in. One is found in the flooded lower floor of a Prague gallery, the room pitch black, the keys wedged together, the sounds from it barely audible. Bolleter travels to abandoned mining towns to play pianos that have been left in derelict hotels, roofs fallen in, fireplaces halfway up walls. Pianos that have been abandoned by sheep farmers are seized upon by Bolleter who sets about coaxing sounds from them.

Over twenty one short chapters Bolleter covers the history of the ruined piano in Australia [and uncovers the amazing fact that when the population of Australia stood at 3 million there were over 700,000 piano's in the country], the way he works, the people he collaborates with, his exhibition for ruined panos in Perth [Piano Labyrinth], his wittily titled label WARPS [World Association for Ruined Pianos Studies], its numerous releases and his forays in to ruined accordions.

Having spent a couple of evenings listening to Bolleters work I find that he can create sounds that move between melancholy and outright bedlam and most places in-between. Situated between four pianos he moves around like an improv Rick Wakeman kneeling down to strike and pluck exposed strings or hit ruined eye level keys. It's fairly obvious he's mad keen for the ruined piano, obsessed even.

Lenka Lente’s Guillaume Bellhome has translated Bolleter’s words in to French, including some of his poems, a discography, bibliography and a filmography. The first half of book is in French, the second in English. There are also numerous black and white photographs of many a suitably ruined piano as found in its natural surroundings. Its a splendid book, a splendid looking book, it even feels good and is printed on the kind of paper that smells strongly of paper. My favourite kind of paper. As a printed outlet for all things obscure, improvised and poetic Lenka Lente goes from strength to strength. Their status is assured.