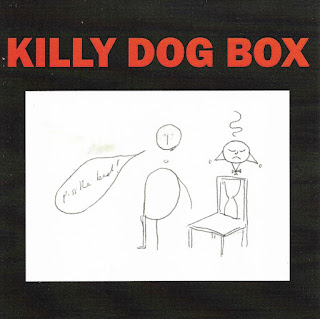 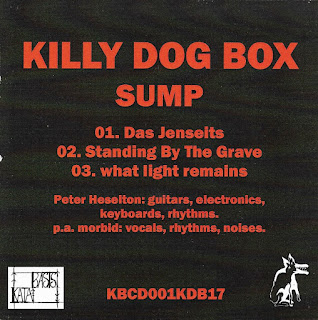 Fuck me with a ragman’s trumpet, its Killy Dog Box. Morbid from Middlesborough in his black hoodie. Ye Godz. How many years has it been? Run to the hills. Bury the cheddar. Lock up your daughters. Stay indoors and hide the cat. Its no place for the weak of heart. Read on at your peril.

Morbid used to send Killy Dog Box material when I was still doing the print zine. I was usually less than kind to whatever it was he sent me and then he started another project called Pre-Dating The 13th which was even worse and STILL he kept on sending me it and then nothing. For what seems like a very long time until just before Christmas when Sump arrived.

I’ll take my hat off to him though, we never fall out. Its never personal with me. Its always about the music. We shared a liking for early Genesis which smoothed the waters somewhat but Killy Dog Box? Even the name. Who could do such a thing? Somebody loved him though, Rob Hayler’s put Killy Dog Box on his oTo cassette only label plus lots of self published work of course and then Pre-Dating The 13th. I have no idea. Whats all that about? There was a one off zine too as I remember, Navigator [?] and an obsession with an obscure Romanian surrealist called Victor Brauner which may have been a name Morbid adopted at some stage. Then I heard he’d become a poet. I’ve not heard any of his poetry.

Mercifully I have managed to expunge whatever memory it is I have of Pre-Dating The 13th and most of Killy Dog Box come to that, there remains but a slight stain somewhere in the recesses of my brain but its nothing I can’t handle. Hideous stuff with moaning in it. I don’t even want to try and imagine what it was it did sound like. Killy Dog Box were, as far as I can remember, a little more palatable. More bass. More life. More death. On his Soundcloud page Morbid tags his KDB tracks DarkAmbientNoise, Darkwave, Industrial which is how I remember it and after spending an evening reconnecting with KDB I find little that isn’t to my taste with some of his work veering slightly towards Power Electronics even. But that name, that art work? What’s it doing? Where’s it going? What is it he’s trying to convey?

Sump is a three track CDR single and KDB are at present a duo with Peter Heselton joining in the fun. Eighteen minutes of music for which Morbid would like seven of your English pounds. Good luck with that one. The opener ‘Das Jenseits’ has its roots deep in the late 70’s and is KDB masquerading as Vice Versa or similar era Cabaret Voltaire, think primitive heartbeat synth drums, squally guitar and a vocal so destroyed, reverbed and doom laden it renders the lyrics unintelligible. Standing by the Grave is Morbid with slightly more legible vocals singing over a fuzzy guitar and a stuttering drum machine, What Light Remains is an atmospheric early Cocteau Twin wash with the lightest of Morbid-y celestial vocals daubed on it.

What this means and I can hardly believe I’m writing this, is that I have a Killy Dog Box release in front of me that I’ve actually enjoyed. But lets not get carried away here, this is slight, less than twenty minutes worth for your bucks and then theres that cover to come to terms with. Still, its a step in the right direction. You can unlock the door now.