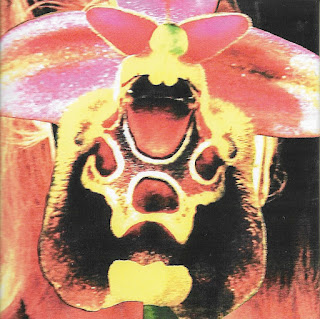 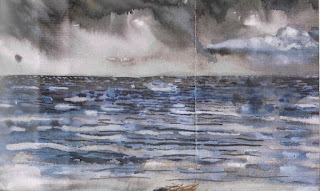 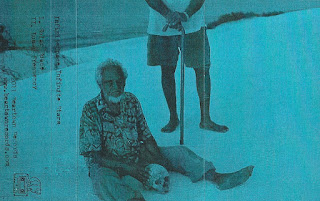 These Feathers Have Plumes/Isnaj Dui
Was Ist Das. Cassette


I must have seen Andie Brown play several times now but never actually sat down to listen to one of her releases. That's her as one half of Mami Wata along with Sharon Gal and as was once with Infinite Space Infinite Stars and as she is now with These Feathers Have Plumes. That's her behind those oversized wine glasses in a sort of experimental take on the glass harmonium thing where you wet the tips of your fingers and play a half recognisable version of Cavatina or Ode to Joy. Except this is much, much better.

I saw her play in Huddersfield recently in a freezing room above a shop on the high street. A very low key and friendly sort of gig where we all sat around on wooden chairs getting numb arses, shuffling ever nearer the portable heaters. As These Feathers Have Plumes Andie attaches huge oversized wine glasses by various electronic means to her laptop so as to pick up vibrations made by wet fingered frotting and clanging and in this instance at least, the addition of small toys which turned out to be things called microbots, battery driven insect toys which whirred and bumped in to each other and tried in vain to climb the steep sides of the glass. All this gets fed in to the laptop from which emerge the most sonorous and delightful of drones.

The Infinite Space Infinite Stars release is the oldest release of the three here, six years old and long out of print, but worth mentioning as it shows us how Brown has developed her sound in the years up to 2016 which is when the other two releases appeared. It has two tracks, one on each side, both running to around the ten minute mark, one track of the crystalline Bach organ work meets Charlemagne Palestine as the Nostromo passes overhead in the opening credits to Alien, the other a Mike Ratledge keyboard solo from his Soft Machine days gone slightly wrong in a good way. All very seventies, Schultzy, Froesey dreamy moments with echoey factory doors being slammed in the background.

The Mami Wata release is in parts totally demonic this being entirely down to Sharon Gal whose remarkable use of her vocal chords echoes the effect used by horror film sound engineers to conjure Beelzebub by slowing the vocal until its just about recognisable. Not one for the kiddiwinks before bedtime. Upon which Andie Brown layers some stunning glass and electronics work so that first track Icefire makes you feel like you're tumbling down a collapsing cliff face into a wild and thrashing rock bashed surf with deadly demons cackling in your ear holes. Like all the Omen films rolled in to one and given over to Xennakis for further manipulation. 'Two' begins with a crucified zither being bashed around a throbbing drone until Gal's shivering vocals emerge once more. Here Gal's vocals are haunted gasps, death rattles, guttural hair raising deliveries. Last track Fata Morgana is a full on fifteen minutes worth of nostril flaring, cloud soaring, spread your wings, take the drugs, celestial synth choir which is some kind of amalgam of all that has gone before. Which coming not long after I sat down and watched Herzog's mesmeric film of the same name gave this release an almost intended synchronicity. Gal is also credited with electronics and recordings which I take to mean field recordings. It all works. Total bliss. Wonderful.

The split tape with Isnaj Dui is the one in which Brown's glass work really shines. Especially on tracks like Soho Living Room in which Dale Cornish recounts the days when he used to visit London as a teenager and on the three 'Return's' the second of which is almost church like with glasses being struck with the serenity of a religious service until the field recording of plastic boxes being crushed is introduced. Brown's use of field recordings [a road compactor joining a xylophone] are perfect fits. Hand in glove. Foot in slipper. Chip in gob. On the flip we have Kate English aka Isnaj Dui. I once saw her at the Unitarian Church in Todmorden on the Tor Fest bill. She played flute that day processing it though various effects until we had flute loops filling that cavernous space. I remember Philthy Taylor jumping to his feet and making a beeline to the merch stall as soon as her set finished. He's been a fan ever since. This is excellent too. One single track performed and recorded in one take that moves from dreamy flute work to looped plucked bridge strings that build and build before almost disappearing then evolving into more heavily looped flute work that flutters and morphs and swoops and dives and soars, its arms a-fling around your swirling head.

So now I curse myself for not indulging earlier. For not being Philthy Taylor and making a bee line for that merch stall. Better late than never tho.

If you're keen enough, and you should be, the links below may lead to you whats left of the digital footprints of these most wonderful releases. That Beartown release though? That may be prove a tad harder to track down. Lets just say I feel lucky having one.