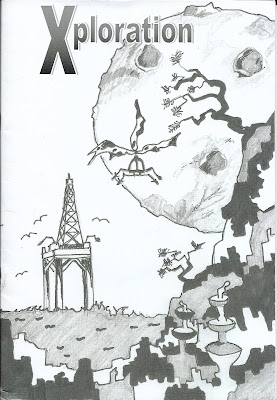 How I came across Shug Hanlan is lost in the mists of recently passed time. It might have been a video on Youtube. I go down the Youtube wormhole quite easily seeing as how I’m easily distracted.  Like just then. I went on Youtube to find Shug but had no success. He has a Facebook page but I’m Facebook intolerant so I can’t link you said video but if you’re not Facebook intolerant like me you can find him quite easily.

In said video Shug is sat in one of a pair of Poangs reading from one of his books. He cued his reading by playing a snippet of music using a remote control to start and stop it, something he did a little clumsily which endeared me to him and this was before I’d read a word.

Shug is a grey bearded Scot who lives somewhere in Scotland that is possibly on the coast and could be Grangemouth. A town thinly disguised in his books as Chungymouth. A town that is socially sealed, ‘as tight as a planktons pish flaps’ where people who don’t make their living from the sea are treated with suspicion.

Xploration is the name of oil rig worker Andy Hayman’s prog band. Who finds helicopters of a certain size conducive to composing music and writes a tone poem called ‘The Knight of the Faerie Parachutes’ while aloft in a Sikorsky S-61, Faerie Parachutes being ‘a thrilling knotty instrumental piece describing an abortive Green Beret rescue mission’.

Andy sets up the Prog Rock Detective Agency after deciding to track down ace missing organist Mike Silverside [‘a man designed by a firm called Von Daniken, Himmler & Crowley’ and leader of the self styled Silverside] who went missing one night after a 1969 gig at the Anstruther Arts Centre.

‘As the 1970’s began, interest in Mike Silverside’s whereabouts didn’t dwindle, it grew. If he’d gone walkabout somewhere otherworldly like the Mojave desert or the Australian outback that would have been end of story as far as most people were concerned but since this was the East Neuk of Fife all sorts of stories sprung up about possible sightings. At the 19th Hole night club, located just off the Old Course at St Andrews word got out about an unusually gifted boogie-woogie pianist who once accompanied Lee Trevino in a rowdy version of ‘Wooly Booly’ an organist in a nearby Kirk, whose off-the-wall improvisations on Listz’s contrapuntal complexities caused some dissenting members of the congregation to call for the banning of neo-baroque, and at shows in Crail the guy manning the fairground organ began frightening children by wedging sharpened pieces of cutlery into the music rolls’.

In Ship-rex a pirate radio station called Reefer Radio is going through something of an upheaval. Kinky Ken and Seasalter Syd are at loggerheads at which direction to take the station in. Late night DJ Seasalter Syd wants to introduce a more eclectic set list and play music by bands like Inflammable Couscous. Kensington Ken wants to stick with the housewives favourites. Things quickly go plop in the night when up pops Jan Van Dram with his Focus Fuels company and from there on in the plot thickens.


And on it goes. In short paragraphs like these.


Some of them oddly spaced.


With a deadpan wit thats deader than a deep fried skate wing [‘the bat of the sea’]. As written by someone who is so obviously a fan of prog and has worked on the rigs and decided that writing stories about the goings on of small town coastal Scottish towns is a more constructive way of passing the time than getting blind drunk, fighting or gambling away your wages.

These are slim volumes readable in a single sitting. I read them when they arrived but cant remembers what happened at the end.

I’ll have to read them again. I think the two books are linked somehow but I’m not sure. As I said I’m easily distracted.

I like Shug and his writing. Its funny in a knowing way and his descriptions of working on the rigs make me glad I’ve never had to step foot on one. I like the way he said someone was a victim of a ride by scalping and the use of Scottish vernacular. I like James Kelman and Irvine Welsh, two other very fine Scottish writers and now I like Shug Hanlan who might not be in the same bracket as Kelman and Welsh but is still worthy of your time.

As an added bonus there’s even a few short, short stories in the back of each book and some humorous cartoons about cunts.