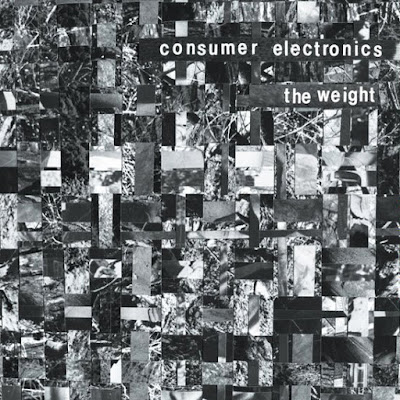 
This latest single by Consumer Electronics is a nasty black stinking wound that's gone to green and purple and oozes deathly puss when prodded. Its the essential soundtrack to a sick planet. Its brevity is a weapon of Ebola proportions. I swear it tried jumping off the turntable when I played it, as if the cartridge was actually repelled by what it was hearing. Play it to a room full of ECM heads and I swear half of them would drop dead. Just like that.

This as preamble and amuse bouche for the double vinyl as soon to be released by Harbinger Sound. This as a black slug crawling from the corpse of Power Electronics. This as proof that Philip Best may be just about the only person alive who can deliver such music with the gravitas it deserves.

Ever since the introduction of Sarah Froelich on vocals [and when was the last time that word didn’t carry the weight it deserves] and Russell Haswell [here also credited with production] Consumer Electronics have become ever more relevant. The sound is now one of sick, twisted electronics. Like someone tried torturing a Korg with a cattle prod. Dark, dark sounds. Froelich’s voice is that of a manic Rosa Klebb. It will make you flinch. Its the perfect accompaniment to Best’s belligerent incandescent tirades. His lyrics are often disturbing without you knowing exactly why, you just know that something creepy’s going on. On The Weight Best stamps all over whatever it was The Band recorded with his take on whatever it was The Band were singing about. Froelich sandwiches Best with a series of character references all of whom need the weight taking off them but when she opens up Hostility Blues with the line ‘I’m that once-a-month bleeding bitch’ the immediate response is an unprompted sotto voce ‘fucking hell’.

Soon to be followed by;

Soon to be followed by;

Because there has to be some light in there. You may feel secure hiding behind Emergency Kitten feeds and isn’t nature great but deep down Consumer Electronics know that you’ll have to venture outside one day. I think that's what they’re getting at anyway.